A Statistical Look at Panspermia

Would panspermia, the idea that primitive life can spread from star to star, be theoretically observable? Henry Lin and Abraham Loeb (both associated with the Harvard-Smithsonian Center for Astrophysics) believe the answer is yes. In a paper accepted for publication in Astrophysical Journal Letters, the duo make the case that panspermia would create statistical correlations regarding the distribution of life. Detecting biosignatures in the atmospheres of exoplanets may eventually allow us to apply statistical tests in search of these clustering patterns. If panspermia occurs, the paper argues, we can in principle detect it.

“In our theory,” says Lin, “clusters of life form, grow, and overlap like bubbles in a pot of boiling water.” The paper argues that future surveys like TESS (Transiting Exoplanet Survey Satellite) could be an early step in building the statistical database needed. TESS could detect hundreds of terrestrial-class explanets, some of whose atmospheres will be subject to study by ground-based observatories and instruments like the James Webb Space Telescope. Next-generation instruments will do more, allowing us to look for detailed spectral signatures like the ‘red edge’ of chlorophyll or, conceivably, the pollution of a technological society.

Moreover, SETI searches at radio or optical wavelengths could produce detections that eventually allow us to test for clustering, the point being that life that arises by spreading through panspermia should exhibit more clustering than life that arises spontaneously. The statistical models that Lin and Loeb develop in the paper have observable consequences that could begin to turn up as we expand our investigations into astrobiology. Think of Lin’s ‘bubbles’ of life that grow and overlap, or consider the spread of life from host to host in terms of the spread of an epidemic. We may eventually have the data to confirm the idea. From the paper:

In a favorable scenario, our solar system could be on the edge of a bubble, in which case a survey of nearby stars would reveal that ∼ 1/2 of the sky is inhabited while the other half is uninhabited. In this favorable scenario, ∼ 25 targets confirmed to have biosignatures (supplemented with 25 null detections) would correspond to a 5σ deviation from the Poisson case [a probability distribution], and would constitute a smoking gun detection of panspermia. 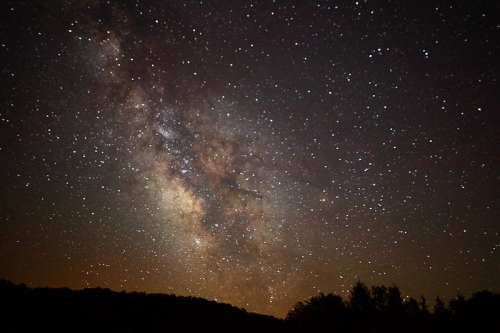 Image: The center of the Milky Way as seen from the mountains of West Virginia. Is there life out there, and if so, does it arise spontaneously, or spread from star to star? Credit: Forest Wander.

The transition between an uninhabited to an inhabited galaxy occurs much faster through panspermia than through a gradual buildup of life arising spontaneously in random areas. There is even a Fermi implication here — if life started at roughly the same time everywhere, then we would expect fewer advanced civilizations at the present time than if life started at random times throughout the universe (the authors note that the Drake equation is based on the assumption that life arises independently everywhere, which contradicts efficient panspermia).

A more generic placement would increase the number of required detections by a factor of a few, though an unusual bubble configuration could potentially reduce the number of required detections. It should be noted that the local environment of our solar system does not reflect the local environment ∼ 4 Gyr ago when life arose on earth, so the discovery of a bubble surrounding earth should be interpreted as the solar system “drifting” into a bubble which has already formed, or perhaps the earth seeding its environment with life.

The paper notes that any species capable of panspermia will have enormous fitness advantages as it can move from one stellar host to another. Lin and Loeb believe that if panspermia is not viable and Earth is the only inhabited planet, interstellar travel may lead to colonization of the galaxy. In this case panspermia models may still be relevant: A culture using starships may provide the opportunity for primitive forms of life including disease and viruses to spread efficiently, with the same processes of growth and diffusion occurring throughout space.

Can primitive life, then, spread on its own, or does it need intelligent life to create the conditions for its growth outward? Either way, we see life expanding in all directions, producing what this CfA news release calls “a series of life-bearing oases dotting the galactic landscape.” If such patterns exist, finding them will depend upon how quickly life spreads, for any ‘bubbles’ or ‘oases’ could be lost in the regular flow of stellar motion and redistribution about the galaxy. But whatever the biological mechanisms of panspermia might be, it is in principle detectable.

The paper is Lin and Loeb, “Statistical Signatures of Panspermia in Exoplanet Surveys,” accepted for publication at Astrophysical Journal Letters (preprint).