‘Dysonian SETI’ is all about studying astronomical data in search of evidence of advanced civilizations. As such, it significantly extends the SETI paradigm both backwards and forwards in time. It moves forward because it offers entirely new search space in not just our own galaxy but galaxies throughout the visible universe. But it also moves backward in the sense that we can use vast amounts of stored observational data from telescopes both ground- and space-based to do the work. We don’t always need new instruments to do SETI, or even new observations. With Dysonian SETI, we can do a deep dive into our increasingly abundant digital holdings.

At Penn State, Jason Wright and colleagues Matthew Povich and Steinn Sigurðsson have been conducting the Glimpsing Heat from Alien Technologies (G-HAT) project, which scans data in the infrared from the Wide-field Infrared Survey Explorer (WISE) mission and the Spitzer Space Telescope. This is ground-breaking work that I’ve written about here on several occasions — see G-HAT: Searching For Kardashev Type III and SETI and Stellar Drift for recent articles. Jason Wright himself explained G-HAT in the Centauri Dreams article Glimpsing Heat from Alien Technologies.

Last April, G-HAT produced a paper that found only a small number of galaxies out of the 100,000 studied that showed higher levels of mid-infrared than would be expected, with the significant caveat that there are natural processes at work that could mimic what might conceivably be the waste heat of an advanced civilization, a Kardashev Type III culture deploying the energies of its entire galaxy. This is a finding that shows us, in Wright’s words, that “…out of the 100,000 galaxies that WISE could see in sufficient detail, none of them is widely populated by an alien civilization using most of the starlight in its galaxy for its own purposes.”

A fascinating finding in its own right, because we’re dealing with a large sample of galaxies that are billions of years old. The Kardashev model moves from Type II, a technology capable of using the entire energy output of its star, to Type III, a technology capable of using an entire galaxy’s luminous energies. If we assume a progression toward ever more capable energy harvesting like this, then abundant time has been available for Type III cultures to arise. Those interesting galaxies with a mid-infrared signature larger than expected will receive more study, to be sure, but the result at this point seems stark. None of the galaxies studied show signs of civilizations that are reprocessing 85 percent or more of their starlight into the mid-infrared. 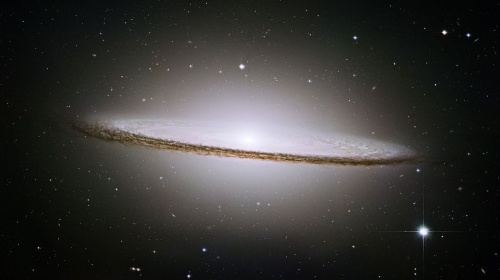 Image: The Sombrero galaxy (M104), a bright nearby spiral galaxy. The prominent dust lane and halo of stars and globular clusters give this galaxy its name. If a Kardashev Type III civilization were engaged here, shouldn’t we be able to detect it? Credit: NASA/ESA and The Hubble Heritage Team (STScI/AURA).

But we keep looking, and those few anomalous galaxies from G-HAT still need explanation. Michael Garrett is general and scientific director for ASTRON (Netherlands Institute for Radio Astronomy). Garrett has been working with data on 93 candidate galaxies found in the most recent paper from G-HAT (citation below). These were the galaxies with mid-infrared values enough out of the ordinary to elicit attention. The G-HAT paper (lead author Roger Griffith) calls them “…the best candidates in the Local Universe for Type III Kardashev civilizations.”

The stellar energy supply of a galaxy as examined in the Kardashev taxonomy is roughly 1038 watts, with waste heat energy expected to be radiated in the mid-infrared (MIR) wavelengths, which means temperatures between 100 and 600 K. Garrett’s new paper notes that the 93 sources G-HAT has found would — if the radiation measured here were interpreted as waste heat — include galaxies reprocessing more than 25 percent of their starlight. But can we make that interpretation? Garrett is quick to add that there are many ways that emissions in the mid-infrared can develop through entirely natural astrophysical processes.

To make a determination about what is actually happening, Garrett relies on a relation known as the infrared radio correlation, which the paper calls a ‘fundamental relation’ for galaxies that holds over a wide range of different redshifts and covers at least five orders of magnitude in luminosity. It extends, as the paper notes, well into the FIR/Mid-Infrared and sub-millimetre domains. The tight correlation between infrared and radio emissions was originally uncovered with data from the IRAS (Infrared Astronomical Satellite) mission, launched in 1983. And it takes us into interesting territory as a diagnostic tool, as the paper notes:

The physical explanation for the tightness of the correlation is that both the non-thermal radio emission and the thermal IR emission are related to mechanisms driven by massive star formation. For galaxies in which the bulk of the Mid-IR emission is associated with waste heat processes, there is no obvious reason why artificial radio emission would be similarly enhanced. While the continuum radio emission level might increase through the use of advanced communication systems, the amount of waste energy deposited in the radio domain is likely to be many orders of magnitude less than that expected at Mid-IR wavelengths.

The Garrett paper, then, looks at the 93 G-HAT sources in terms of the mid-infrared radio correlation, with the assumption that galaxies associated with Type III civilizations should appear as outliers. The result: The correlation holds as expected. The likely interpretation is that the excesses of radiation in mid-infrared wavelengths are due to natural heat sources rather than the heat of a titanic civilization going about its business. Garrett puts the point bluntly: “The original research at Penn State has already told us that such systems are very rare but the new analysis suggests that this is probably an understatement, and that advanced Kardashev Type III civilisations basically don’t exist in the local Universe.”

In an email this morning, I ran today’s post by Jason Wright, who said that Garrett’s study was the kind of thing the G-HAT team had hoped for, an investigation into what might have caused the galactic anomalies by other methods. He also noted that even with this information, we can’t absolutely rule out a K-III:

“Kardashev’s original line of research was to estimate the power available to a KIII to transmit radio waves that we would detect at Earth. Determining that these galaxies are radio bright in a way correlated with their MIR is a good bit of information to have, but it doesn’t rule anything out (they do seem to be consistent with starbursts, as expected, but they’re not inconsistent with KIII’s). On the other hand, there’s no reason I can think of that bright radio emissions from leaked communications would follow the MIR-radio correlation for starbursts (what a coincidence that would be!).”

Or is a Kardashev Type III civilization advanced enough that it produces low waste heat emissions in ways that are beyond our understanding? Whatever the case, the paper adds that the correlation method can be extended into the search for possible Kardashev Type II civilizations within our own or nearby galaxies:

…it should be noted that the IR-radio correlation is also known to hold on sub-galactic scales (e.g. Murphy (2006). A comparison of resolved Mid-IR and radio images of nearby galaxies on kpc scales can also be useful in identifying artificial mid-IR emission from advanced civilisations that lie between the Type II and Type III types. While Wright et al. (2014a) venture that Type III civilisations should emerge rapidly from Type IIs, it might be that some specific galactic localities are preferred – see for example Cirkovic & Bradbury (2006) or are to be best avoided e.g. the galactic centre. A comparison of the resolved radio and mid-IR structures can therefore also be relevant to future searches of waste heat associated with advanced civilisations.

The paper is Garrett, “The application of the Mid-IR radio correlation to the G^ sample and the search for advanced extraterrestrial civilisations,” accepted at Astronomy & Astrophysics (abstract). The Griffith paper on recent G-HAT results is Griffith et al., “The Ĝ Infrared Search for Extraterrestrial Civilizations with Large Energy Supplies. III. The Reddest Extended Sources in WISE,” Astrophysical Journal Supplement Series Vol. 217, No. 2, published 15 April 2015 (abstract / preprint).