Another Search for Kardashev Type III

I have no idea whether we would be able to recognize a Kardashev Type III civilization if we saw one, but the search is necessary as we rule out some possibilities and examine others. As we saw yesterday, the Glimpsing Heat from Alien Technologies project at Penn State has examined data on 100,000 galaxies, finding 93 with mid-infrared readings that merit further study. One thing that we, operating with what we know about physics, would expect from a super-civilization is the production of waste heat, in the temperature range between 100 and 600 K, and that’s why previous searches for Dyson spheres have gone looking for such signatures.

But Kardashev Type III is an extreme reach. We’re talking about a civilization capable of using the energies not just of its own star but of its entire galaxy, and just how this would be done is a question about which we can only speculate. As Erik Zackrisson (Uppsala University) and colleagues do in a new paper that balances nicely against Michael Garrett’s recent study. The Zackrisson paper posits Dyson spheres as one way to harvest radiation energies, and takes as its inspiration a 1999 study by James Annis that considers this method in relation to detecting a galaxy-spanning civilization.

A Dyson sphere would partially shroud a star or, in its extreme form, completely surround it, making vast amounts of radiant energy available for the purposes of its builders. Annis wondered how a civilization building Dyson spheres throughout a galaxy would affect the light output of the galaxy. To study the matter, he suggested using the so-called Tully-Fisher relation, the correlation (in spiral galaxies) between galactic luminosity and rate of rotation. 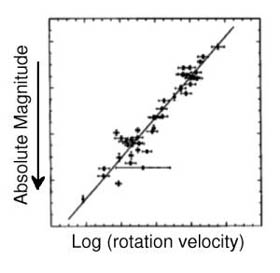 Zackrisson follows Annis’ lead, knowing that if you can determine a galactic rotation velocity, you can use the Tully Fisher relation to come up with its intrinsic brightness. since the optical brightness of a galaxy shows a consistent relation to the maximum rotation velocity and radius of the galaxy. Annis, using a sample of 137 galaxies, looked for candidates that were darker than they should be, finding no outliers in his admittedly limited dataset. Michael Garrett also used a useful relation, in his case between the mid-infrared output of a galaxy and its radio emissions, one that has been shown to hold over a wide range of luminosity and redshifts, to look for cases where the relation failed.

Image: The Tully-Fisher relation shows that rotation curves can be correlated with luminosity. The higher the luminosity, the higher the maximum rotational velocity.

If there is a Kardashev Type III civilization building Dyson spheres on a galactic scale, its astroengineering projects should not affect the gravitational potential of the galaxy, but they should decrease the total optical luminosity, thus making the galaxy an outlier that would appear less luminous than it should. Zackrisson used Tully-Fisher on a sample of 1359 spiral galaxies drawn from a catalog of galaxies produced in 2007 by Christopher Springob and colleagues. The criterion for KIII candidate galaxies was the one used by Annis, that candidates should be ≥ 1.5 magnitudes below what would be expected from Tully-Fisher (the reasons for the choice have to do with limiting spurious detections and are explained at some length in the paper).

As with Michael Garrett’s study, we find little evidence of Kardashev Type III in the results. The conservative upper limit on the fraction of local disks that meet the criteria for a candidate KIII galaxy is ≲ 3%. But we need to drill down into this. Let me quote from the paper:

In this sample, a total of 11 objects are found to be significantly under-luminous (by a factor of 4 in the I-band) compared to the Tully-Fisher relation, and therefore qualify as Kardashev type III host galaxy candidates according to this test. However, by scrutinizing the optical morphologies and WISE 3.4–22 µm infrared fluxes of these objects, we find nothing that strongly supports the astroengineering interpretation of their unusually low optical luminosities.

So we do have a few anomalous galaxies that evidently owe their peculiarities to astrophysical causes not related to astroengineering on a K-III scale. The paper continues:

Hence, we conclude that their apparent positions in the Tully-Fisher diagram likely have mundane causes, with underestimated distances being the most probable explanation for most of the candidates. Under the assumption that none of them are bona fide KIII objects, we set a tentative upper limit of ≲ 0.3% on the fraction of disk galaxies harbouring KIII civilizations. 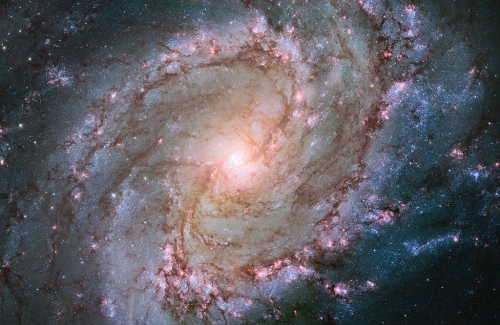 Image: This Hubble image shows the scatterings of bright stars and thick dust that make up spiral galaxy Messier 83, otherwise known as the Southern Pinwheel Galaxy. One of the largest and closest barred spirals to us, this galaxy has hosted a large number of supernova explosions, and appears to have a double nucleus lurking at its core. What we have yet to find in galaxies like these is any sign of KIII civilizations. Credit: NASA, ESA, and the Hubble Heritage Team (STScI/AURA) Acknowledgement: William Blair (Johns Hopkins University).

Does this mean that galaxy-spanning civilizations do not exist? The answer is no: The paper examines a specific scenario, that such civilizations would construct myriad Dyson spheres to harvest radiation energy, and that the waste heat of these constructions would be observable. We are a species whose experience of technology is negligible compared to a KIII culture, so we cannot know what kind of options they would have available after millions of years of technological development. All we can say for sure based on a study like this is that there is no evidence of massive deployment of Dyson spheres in any of the galaxies studied.

I don’t say this to in any way minimize the value of such work. We can’t know if something is there unless we look for it. We keep looking, then, while trying to imagine what civilizations far in advance of our own might do to use the maximum energy available to them. Ruling out one scenario is cause for a re-calibration of our assumptions and a continuing search.

The paper is Zackrisson et al., “Extragalactic SETI: The Tully-Fisher Relation as a Probe of Dysonian Astroengineering in Disk Galaxies,” in press at The Astrophysical Journal (preprint). The Annis paper is “Placing a limit on star-fed Kardashev type III civilisations,” JBIS 52, pp.33-36 (1999).