Yesterday’s post on what we’re learning about Rosetta’s comet (67P/Churyumov–Gerasimenko) briefly touched on the issue of changing the orbit of such bodies for use in resource extraction. Moving the comet Grigg-Skjellerup is part of the plot of Neal Stephenson’s novel Seveneves, where the idea is to support a growing human population in space with the comet’s huge reserves of water. Just how hard it would be to move a comet is made clear by how a proposed near-term mission approaches the question of deflecting a small asteroid.

The mission, discussed at the ongoing European Planetary Science Congress in Nantes, is called AIDA, for Asteroid Impact and Deflection Assessment. A joint mission being developed by the European Space Agency and NASA, AIDA is actually a two-pronged affair. ESA is leading the Asteroid Impact Mission (AIM), while NASA is behind the Double Asteroid Redirection Test (DART). The plan is to rendezvous with the asteroid (65803) Didymos and its tiny satellite (known informally as ‘Didymoon’) for scientific study and a deflection test.

Think about this comparison: Comet Grigg-Skjellerup (studied by the Giotto probe in 1992, though from a considerable distance) is approximately 2.6 kilometers in diameter. Didymos is about 750 meters in diameter, and the Didymoon about 160 meters across. It’s the Didymoon that ESA and NASA plan on deflecting, driving the DART spacecraft into it as AIM observes and analyzes the plume of ejected material. With AIM remaining on the job, further mapping and monitoring will study the impact area and reveal any changes in Didymoon’s orbit. 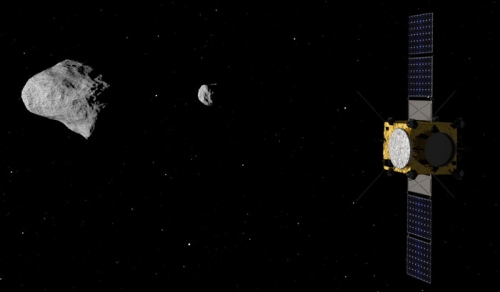 Image: Arrival of AIM at Didymos and Didymoon. Credit: ESA.

Thus the spread between a near-future science fiction story (the acquisition of Grigg-Skjellerup for resources in Seveneves) and present-day technology — we can assume that Stephenson’s comet-catcher has some powerful propulsive assets compared to what we can deploy today. But the novel explains all this on its own terms and I’ll say no more about it. As to AIDA, the words of Patrick Michel give us the gist. Michel is lead on the AIM Investigation team:

“To protect Earth from potentially hazardous impacts, we need to understand asteroids much better – what they are made of, their structure, origins and how they respond to collisions. AIDA will be the first mission to study an asteroid binary system, as well as the first to test whether we can deflect an asteroid through an impact with a spacecraft. The European part of the mission, AIM, will study the structure of Didymoon and the orbit and rotation of the binary system, providing clues to its origin and evolution. Asteroids represent different stages in the rocky road to planetary formation, so offer fascinating snapshots into the Solar System’s history.” 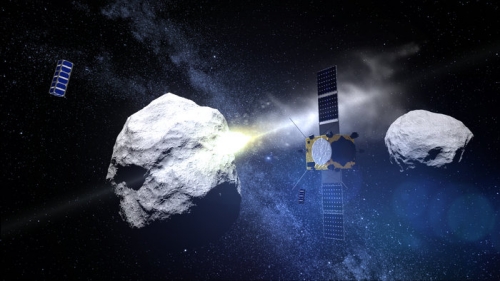 Image: Impact on Didymoon, as observed by AIM and its deployed CubeSats. Credit: ESA.

AIM would launch in October of 2020, with rendezvous at (65803) Didymos in May of 2022. Didymos rotates rapidly, about once every 2.26 hours, and is considered the most accessible asteroid of its size from Earth. Didymoon orbits Didymos every 11.9 hours at an altitude of 1.1 kilometers — the name Didymos (Greek for ‘twin’) was chosen by astronomer Joe Montani, who discovered the objects, when light-curve analysis revealed the binary nature of the asteroid. While Didymos is thought to be a ‘chondrite’ (stony) asteroid, we know nothing about the mass and density of Didymoon, a lack that AIM and DART would be able to correct in short order.

The AIM mission has echoes of Rosetta, for like the latter, it carries a lander. MASCOT-2, built by the German aeronautics and space research center (DLR) will probe the internal structure of Didymoon, emitting low-frequency radar waves that will pass through the object, allowing AIM to chart the deep structure of the asteroid even as it measures Didymoon’s density and maps the surface at visible and infrared wavelengths. DART’s impact with Didymoon is scheduled for October of 2022. I also notice that AIM is scheduled to deploy three CubeSats to assist with impact observations and to test communication links between satellites in deep space.

DART itself is a 300 kg impactor that is designed to carry no scientific payload other than a 20-cm aperture CCD camera to support guidance during the impact approach phase. Launch is currently proposed for July of 2021. The impact at 6.25 kilometers per second is expected to produce a velocity change in the range of 0.4 mm/s, which should change the relative orbit of Didymos and Didymoon but create only a slight change in the binary’s heliocentric orbit.

Related: NASA has funded a concept design study and analysis for a mission called Psyche, which would investigate the interesting asteroid of the same name. Psyche is thought to be the survivor of a collision with another object that stripped off the outer layers of a protoplanet. About 200 kilometers in diameter, it is thought to be the most massive M-type asteroid, with a surface that is 90 percent iron. The Psyche mission, led by Linda Elkins-Tanton (Arizona State) would be an orbiter that would launch in 2020 and arrive in 2026.