I want to revisit the paper on KIC 8462852 briefly this morning, as I’m increasingly fascinated with the astrophysics we’re digging into here. The fact that the star, some 1480 light years away, is also a candidate for further SETI investigation makes it all the more intriguing, but all my defaults lean toward natural processes, if highly interesting ones. Let’s think some more about what we could be looking at and why the ‘cometary’ hypothesis seems strongest.

Remember that we’re looking at KIC 8462852 not only because the Kepler instrument took the relevant data, but because the Kepler team took advantage of crowdsourcing to create Planet Hunters, where interested parties could sign up to study the light curves of distant stars on their home computers. KIC 8462852 has been causing ripples since 2011 because while we do seem to be seeing something passing between its light and us, that something is not a planet but a large number of objects in motion around the star. Some of the dips in starlight are extremely deep (up to 22 percent), and they are not periodic.

…it turns out there are lots of these dips in the star’s light. Hundreds. And they don’t seem to be periodic at all. They have odd shapes to them, too. A planet blocking a star’s light will have a generally symmetric dip; the light fades a little, remains steady at that level, then goes back up later. The dip at 800 days in the KIC 8462852 data doesn’t do that; it drops slowly, then rises more rapidly. Another one at 1,500 days has a series of blips up and down inside the main dips. There’s also an apparent change in brightness that seems to go up and down roughly every 20 days for weeks, then disappears completely. It’s likely just random transits, but still. It’s bizarre.

A ragged young debris disk would be the natural conclusion, but arguing against this is the fact that we don’t see the infrared excess that a dusty disk would create. I also got interested in what nearby objects might be doing to this star when I started digging into the paper, which is cited at the end of this piece. Yale postdoc Tabetha Boyajian and colleagues present an image from the UK Infrared telescope (UKIRT) that shows KIC 8462852 along with a second source of similar brightness, as shown in the image below. Notice the ‘extension’ of KIC 8462852 to the left. 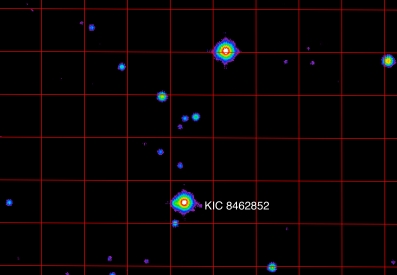 Image: UKIRT image for KIC 8462852 and another bright star for comparison, showing that it has a distinct protrusion to the left (east). For reference, the grid lines in the image are 10″
× 10″. Credit: Tabetha Boyajian et al.

A follow-up Keck observation revealed what the UKIRT image suggested, that there is a faint companion star. 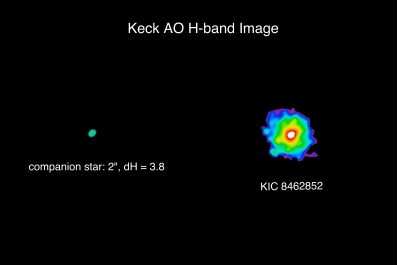 This gets important as we consider the cometary debris hypothesis. The paper argues that the chance alignment possibility is only about one percent. If the companion is at the same distant as KIC 8462852, which is an F-class star, then we would be looking at an M-class red dwarf, roughly 885 AU distant from its companion. From the paper:

At this separation, the second star cannot currently be physically affecting the behavior of the Kepler target star, though could be affecting bodies in orbit around it via long term perturbations. If such a star is unbound from KIC 8462852, but traveling through the system perpendicular to our line of sight, it would take only 400 years to double its separation if traveling at 10 km sec−1. So, the passage would be relatively short-lived in astronomical terms.

Recall that the paper settles on cometary activity as the most likely natural explanation for the unusual KIC 8462852 light curve. We could be looking at a series of comet fragments seen close to the star as they move on a highly eccentric orbit, a collection of objects that has spread around the orbit and may be continuing to fragment. And as seen yesterday, Boyajian and team make the case that both thermal stress and the presence of super-Earth planets orbiting within 1 AU of the star could account for the tidal disruption that would have produced this scenario.

We’ve often discussed cometary disruptions in these pages, speculating on what the passage of a nearby star might do to comets in the Oort Cloud. As per the images above, it’s a natural speculation that the anomalies of KIC 8462852 are the result of a similar scenario. We have no idea whether the companion star is bound to KIC 8462852, but assume for a moment that it is not. A star passing close enough to this system has the potential for triggering a swarm of infalling comets. If the star is gravitationally bound, then we can invoke the so-called Kozai mechanism, ‘pumping up comet eccentricities,’ as the paper puts it. We can explore this hypothesis by studying the motion of the companion star to confirm its bound or unbound status.

The paper, as we saw yesterday, explores other hypotheses but settles on comet activity as the likeliest, given the data we currently have. The kind of huge collision between planets that would produce this signature would also be rich in infrared because of the sheer amount of dust involved, and we don’t see that. You can see why all this would catch the eye of Jason Wright (Penn State), who studies SETI of the Dysonian kind, involving large structures observed from Earth. Because if we’re looking at cometary chunks, some of these are extraordinarily large.

So what’s next? The paper explains:

First and foremost, long-term photometric monitoring is imperative in order to catch future dipping events. It would be helpful to know whether observations reveal no further dips, or continued dips. If the dips continue, are they periodic? Do they change in size or shape? On one hand, the more dips the more problematic from the lack of IR emission perspective. Likewise, in the comet scenario there could be no further dips; the longer the dips persist in the light curve, the further around the orbit the fragments would have to have spread. The possibility of getting color information for the dips would also help determine the size of the obscuring dust.

Monitoring of KIC 8462852 will continue from the ground thanks to the efforts of the MEarth project, which will begin the effort in the fall of this year, and that’s going to be useful for tracking the variability of the dips. Remember, too, that problem of lack of infrared excess. Those numbers could change if we really are witnessing a recent event. The paper continues:

Several of the proposed scenarios are ruled out by the lack of observed IR excess but the comet scenario requires the least. However, if these are time-dependent phenomenon, there could be a detectable amount of IR emission if the system were observed today. In the comet scenario, the level of emission could vary quite rapidly in the near-IR as clumps pass through pericenter (and so while they are transiting). The WISE observations were made in Q5, so detecting IR-emission from the large impact scenario, assuming the impact occurred in Q8 is also a possibility. We acknowledge that a long-term monitoring in the IR would be demanding on current resources/facilities, but variations detected in the optical monitoring could trigger such effort to observe at the times of the dips.

What a fascinating object! There has been a media flurry about the SETI possibilities, but that doesn’t mean that we shouldn’t investigate KIC 8462852 in SETI as well as astrophysical terms. No serious scientist is jumping to conclusions here other than to say that there is nothing in the laws of physics that would preclude the existence of civilizations more advanced than our own, and nothing that we know of that would keep us from detecting large artifacts. How they could be detected around other stars will be the subject of a forthcoming paper from Jason Wright and colleagues in The Astrophysical Journal, one we’ll obviously discuss here.