Back from my break, I have to explain to those who asked about what exotic destination I was headed for that I didn’t actually go anywhere (the South Pacific will have to wait). The break was from writing Centauri Dreams posts in order to concentrate on some other pressing matters that I had neglected for too long. Happily, I managed to get most of these taken care of, all the while keeping an eye on interstellar news and especially the interesting case of KIC 8462852 (for those just joining us, start with KIC 8462852: Cometary Origin of an Unusual Light Curve? and track the story through the next two entries).

Whatever the explanation for what can only be described as a bizarre light curve from this star, KIC 8462852 is a significant object. While Dysonian SETI has been percolating along, ably studied by projects like Glimpsing Heat from Alien Technologies, the public has continued to see SETI largely in terms of radio and deliberate attempts to communicate. Tabetha Boyajian and team, who produced the first paper on KIC 8462852, have put an end to that, ensuring wide coverage of the object as well as the notion that detection of an extraterrestrial intelligence might occur through observing large artificial structures in our astronomical data.

Meanwhile, the delightful ‘Tabby’s Star’ is beginning to emerge as a replacement for the star’s unwieldy designation. Coverage of the story has been all over the map. The term ‘alien megastructures’ has appeared in various headlines, while others have focused on the natural explanations that could mimic the ETI effect. The tension between natural and artificial is going to persist, and it’s the subject of Jason Wright and colleagues in their recent paper (submitted to The Astrophysical Journal), which asks that kinds of signatures an alien civilization’s activities could create, and what natural phenomenon could explain such signatures.

I think the Wright paper hits exactly the right note in its conclusion:

Invoking alien engineering to explain an anomalous astronomical phenomenon can be a perilous approach to science because it can lead to an “aliens of the gaps” fallacy (as discussed in §2.3 of Wright et al. 2014b) and unfalsifiable hypotheses. The conservative approach is therefore to initially ascribe all anomalies to natural sources, and only entertain the ETI hypothesis in cases where even the most contrived natural explanations fail to adequately explain the data. Nonetheless, invoking the ETI hypothesis can be a perfectly reasonable way to enrich the search space of communication SETI efforts with extraordinary targets, even while natural explanations are pursued.

Just so, and the lengthy discussions in the comments section here on the previous three articles on KIC 8462852 are much in that spirit. We do have the cometary hypothesis suggested in the original Boyajian paper as what had been considered the leading candidate, and Michael Million, a regular in these pages, has pointed to a paper from Jason Barnes (University of Idaho) and colleagues that looks at the phenomenon of gravity darkening and spin-orbit misalignment.

In this scenario, we have a star that is spinning fast enough to become oblate; i.e., it has a larger radius at the equator than it does at the poles, producing higher temperatures and ‘brightening’ at the poles, while the equator is consequently darkened. The transits of a planet in this scenario can produce asymmetrical light curves, a process the Wright paper notes, and one that Million began to discuss as early as the 17th in the comments here. That discussion was picked up in Did the Kepler space telescope discover alien megastructures? The mystery of Tabby’s star solved, which appeared in a blog called Desdemona Despair. The author sees the case as clear-cut: “There are four discrete events in the Kepler data for KIC 8462852, and planetary transits across a gravity-darkened disk are plausible causes for all of them.” 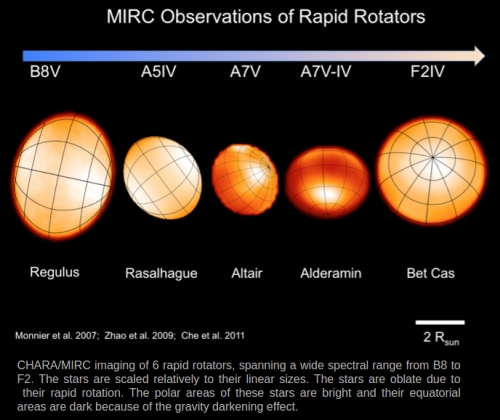 Meanwhile, Centauri Dreams reader Jim Galasyn uncovered a paper by a team led by Shoya Kamiaka (University of Tokyo) studying gravity darkening of the light curves for the transiting system PTFO 8-8695, also studied by Barnes, which involves a ‘hot Jupiter’ orbiting a rapidly rotating pre-main-sequence star. Gravity darkening appears to be very much in play, and we can, as the Desdemona Despair blog does, cite the Barnes paper: “An oblique transit path across a gravity-darkened, oblate star leads to the long transit duration and asymmetric lightcurve evident in the photometric data [for the PTFO 8-8695 system].”

In Wright et al.’s “Signatures and Information Content of Transiting Megastructures” paper, which looks in depth at the natural sources of unusual light curves, these possibilities are discussed in relation to non-spherical stars, and this is worth quoting:

The dominant effect of a non-disk-like stellar aspect on transit light curves is to potentially generate an anomalous transit duration; the effects on ingress and egress shape are small. Gravity darkening, which makes the lower-gravity portions of the stellar disk dimmer than the other parts, can have a large effect on the transit curves of planets and stars with large spin-orbit misalignment, potentially producing transit light curves with large asymmetries and other in-transit features (first seen in the KOI-13 system, Barnes 2009; Barnes et al. 2011).

Another effect of a non-spherical star is to induce precession in an eccentric orbit. Wright also takes note of PTFO 8-8695, “which exhibits asymmetric transits of variable depth, variable duration, and variable in-transit shape.” Here astronomers were helped by the star’s age, which was soundly established by its association with the Orion star forming region. Wright adds that effects of this magnitude would not be expected for older, more slowly rotating objects.

The work on KIC 8462852 continues, and I also need to mention that the Allen Telescope Array focused in on this fascinating target beginning on October 16, even as the American Association of Variable Star Observers (AAVSO) published an Alert Notice requesting that astronomers begin observing the system. For more on this, see SETI Institute Undertakes Search for Alien Signal from Kepler Star KIC 8462852. Universe Today quotes the SETI Institute’s Gerald Harp as saying: “This is a special target. We’re using the scope to look at transmissions that would produce excess power over a range of wavelengths.” I’ll obviously be reporting on the paper that comes out of the ATA search.