I’ve mentioned before that I think the name ‘Tabby’s Star’ is a wonderful addition to the catalog. It trips off the tongue so much more easily than the tongue-twisting KIC 8462852, and of course it honors the person who brought this unusual object to our attention, Yale University postdoc Tabetha Boyajian. 1480 light years away, Tabby’s Star is an F3 with a difference. It produces light curves showing objects transiting across its face, some of them quite large, and the search is on to find an explanation that fits within the realm of natural causes.

Five articles about Tabby’s Star have already appeared in these pages, with the most likely explanation being some kind of cometary activity, an answer that seems to satisfy no one. We’ve also consulted both Boyajian’s paper on the subject and a paper by Jason Wright and colleagues out of the Glimpsing Heat from Alien Technologies project at Penn State. The light curves we’re looking at do fit the scenario of a ‘Dyson swarm,’ a cluster of power-collecting surfaces that an advanced civilization might create to extract maximum energy from its star.

Thus we can’t rule out the possibility of an extraterrestrial civilization, but no one is claiming that we’ve found one. The point is that in terms of Dysonian SETI, which looks for signs of another civilization’s activity in our astronomical data, Tabby’s Star is the most interesting target we’ve found, so it only makes sense to investigate it. Assuming we do deduce a natural cause for its signature, we will have learned something about an unusual astrophysical process, and that is all to the good. The sole driver here is to investigate and find out what is happening.

The SETI Institute has a natural interest in all this and has been deploying the Allen Telescope Array on Tabby’s Star for more than two weeks. Now we have an update on what the Institute has found. The effort used the Array’s 42 antennas north of San Francisco to look for narrow-band signals (approximately 1 Hz in width) that could be part of an interstellar beacon. In general, SETI at radio and optical frequencies (SETI, that is, of the non-Dysonian kind) looks for this kind of signal, a deliberate attempt by a civilization to declare its presence. 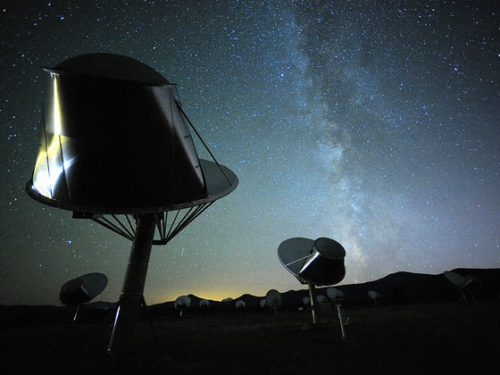 But the SETI Institute also looked for broadband signals, an interesting choice. Here we are asking whether, if there really is an enormous astro-engineering effort going on around this star, there would be spacecraft sent out to service it. Our own investigations into quick travel around the Solar System point to microwave beaming as a feasible solution, the basis for an interplanetary infrastructure. Such intense microwave beams might well be visible, a kind of ‘leakage’ from the civilization’s activities that implies nothing about communication.

Here’s the result, from the SETI Institute’s paper on the work (Jy stands for jansky, a unit of density used in radio astronomy):

So no clear evidence for either kind of signal between 1 and 10 GHz. The paper goes on:

These limits correspond to isotropic radio transmitter powers of 4 – 7 1015 W and 1020 W for the narrowband and moderate band observations. These can be compared with Earth’s strongest transmitters, including the Arecibo Observatory’s planetary radar (2 1013 W EIRP [effective isotropically radiated power]). Clearly, the energy demands for a detectable signal from KIC 8462852 are far higher than this terrestrial example (largely as a consequence of the distance of this star).

What this initial search does is to place upper limits on anomalous emissions from Tabby’s Star. It tells us that we can rule out omnidirectional transmitters broadcasting narrow-band signals at approximately 100 times today’s total terrestrial energy usage, as well as broadband emissions of ten million times terrestrial energy usage. These numbers are high, as the Institute notes, but the paper goes on to say that required transmitter power for narrow-band signals could be reduced considerably if a signal were being beamed in our direction intentionally. It’s worth remembering, too, that any civilization of K2 status (capable of building a Dyson swarm) should have approximately 1027 watts to work with, the energy output of its star.

“The history of astronomy tells us that every time we thought we had found a phenomenon due to the activities of extraterrestrials, we were wrong. But although it’s quite likely that this star’s strange behavior is due to nature, not aliens, it’s only prudent to check such things out.”

Exactly so. The authors add that the star will be the subject of observations for years to come.

Addendum: The Boquete Optical SETI Observatory in Panama is also going to be brought into the search, as per this story.