KIC 8462852 is back in the news. And despite a new paper dealing with the unusual star, I suspect it will be in the news for some time to come, for we’re a long way from finding out what is causing the unusual light curves the Planet Hunters group found in Kepler data. KIC 8462, you’ll recall, clearly showed something moving between us and the star, with options explored by Tabetha Boyajian, a Yale University postdoc, in a paper we examined here in October (see KIC 8462852: Cometary Origin of an Unusual Light Curve? and a series of follow-up articles).

To recap, we’re seeing a light curve around this F3-class star that doesn’t look anything like a planetary transit, but is much more suggestive of debris. Finding a debris disk around a star is not in itself unusual, since we’ve found many such around young stars, but KIC 8462 doesn’t appear to be a young star when looked at kinematically. In other words, it’s not moving the way we would expect from a star that has recently formed. Moreover, the star shows us none of the emissions at mid-infrared wavelengths we would expect from a young, dusty disk.

Jason Wright and the team at the Glimpsing Heat from Alien Technologies project at Penn State have taken a hard look at KIC 8462 and discussed it briefly in a recent paper (citations for both the Boyajian and Wright papers are at the end of this entry). It seems entirely reasonable to do what Wright did in referencing the fact that the light curve we see around the star is what we would expect to see if an advanced civilization were building something. That ‘something’ might be a project along the lines of a ‘Dyson swarm,’ in which huge collectors gather solar energy, or it could be a kind of structure beyond our current thinking.

We all know that the media reaction was swift, and we saw some outlets acting as if Wright had declared KIC 8462 an alien outpost. He had done no such thing, nor has he or the Penn State team ever suggested anything more than continuing investigation of this strange star. What seems to bother others, who have scoffed at the idea of extraterrestrial engineering, is that Wright and company have not explicitly ruled it out as a matter of course. The assumption there is that no other civilizations exist, and therefore we could not possibly be seeing one.

I come down on the side of keeping our options open and studying the data in front of us. We have a lot of work ahead to figure out what is causing a light curve so unusual that at least one of the objects briefly occulting this star caused a 22 percent dip in its flux. That implies a huge object, evidently transiting in company with many smaller ones. There seems to be no evidence that the objects are spherically symmetric. What’s going on around KIC 8462?

A new paper from Massimo Marengo (Iowa State) and colleagues looks at what Tabetha Boyajian identified as the most likely natural cause of the KIC 8462 light curves. All I have at this point is the JPL news release and a release from Iowa State — the paper has not yet appeared online — describing evidence for a swarm of comets as the culprit. The study, which has been accepted at Astrophysical Journal Letters relies on Spitzer data dating from 2015, five years later than the WISE data that found no signs of an infrared excess. 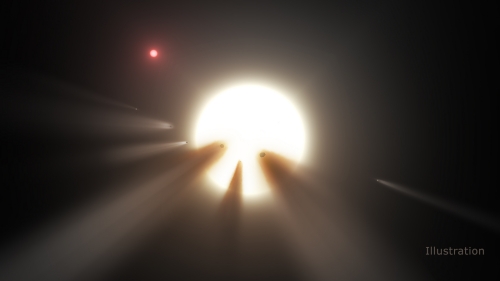 Image: This illustration shows a star behind a shattered comet. Is this the explanation for the unusual light curves found at KIC 8462852? Image credit: NASA/JPL-Caltech.

If there had been a collision between planets or asteroids in this system, it was possible that the WISE (Wide-field Infrared Survey Explorer) data, taken in 2010, reflected conditions just before the collision occurred. Now, however, we can rule that out, because Spitzer, like WISE, finds no excess of infrared light from warm dust around KIC 8462. So the idea of planet or asteroid collisions seems even less likely. Marengo, according to the JPL document, falls back on the idea of a family of comets on an eccentric orbit. He’s also aware of just how odd KIC 8462 is:

“This is a very strange star,” [Marengo] said. “It reminds me of when we first discovered pulsars. They were emitting odd signals nobody had ever seen before, and the first one discovered was named LGM-1 after ‘Little Green Men… We may not know yet what’s going on around this star, but that’s what makes it so interesting.”

It would take a very large comet indeed to account for the drop in flux we’ve already seen, but a swarm of comets and fragments can’t be ruled out because we just don’t have enough data to make the call. I assume Marengo also gets into the fact that a nearby M-dwarf (less than 900 AU from KIC 8462, is a possible influence in disrupting the system. The comet explanation would be striking if confirmed because we have no other instances of transiting events like these, and we would have found these comets by just happening to see them at the right time in their presumably long and eccentric orbit around the star.

Image: Left: a deep, isolated, asymmetric event in the Kepler data for KIC 8462. The deepest portion of the event is a couple of days long, but the long “tails” extend for over 10 days. Right: a complex series of events. The deepest event extends below 0.8, off the bottom of the figure. After Figure 1 of Boyajian et al. (2015). Credit: Wright et al.

So, despite PR headlines like Strange Star Likely Swarmed by Comets, I think we have to take a more cautious view. We’re dealing with a curious star whose changes in flux we don’t yet understand, and we have candidate theories to explain them. We’re no more ready to declare comets the cause of KIC 8462’s anomalies than we are to confirm alien megastructures. At this point we should leave both natural and artificial causes in the mix and recognize how long it’s going to take to work out a viable solution through careful, unbiased analysis.

The Marengo paper is Marengo, Hulsebus and Willis, ”KIC 8462852: The Infrared Flux,” Astrophysical Journal Letters, Vol. 814, No. 1 (abstract). I write about it this morning only because it is getting so much media attention — more later when I can go through the actual paper. The Boyajian paper is Boyajian et al., “Planet Hunters X. KIC 8462852 – Where’s the flux?” submitted to Monthly Notices of the Royal Astronomical Society (preprint). The Wright paper is Wright et al., “The Ĝ Search for Extraterrestrial Civilizations with Large Energy Supplies. IV. The Signatures and Information Content of Transiting Megastructures,” submitted to The Astrophysical Journal (preprint).