No Catastrophic Collision at KIC 8462852

Last week I mentioned that I wanted to get into Massimo Marengo’s new paper on KIC 8462852, the interesting star that, when studied by the Kepler instrument, revealed an intriguing light curve. I’ve written this object up numerous times now, so if you’re coming into the discussion for the first time, plug KIC 8462852 into the archive search engine to get up to speed. Marengo (Iowa State) is himself well represented in the archives. In fact, I began writing about him back in 2005, when he was working on planetary companions to Epsilon Eridani. 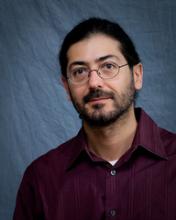 In the new paper, Marengo moves the ball forward in our quest to understand why the star I’ll abbreviate as KIC 8462 poses such problems. The F3-class star doesn’t give us the infrared signature we’d expect from a debris disk, yet the light curves we see suggest objects of various sizes (and shapes) transiting across its surface. What we lacked from Tabetha Boyajian’s earlier paper (and it was Boyajian, working with the Planet Hunters group, that brought KIC 8462 to our attention) was data about infrared wavelengths after the WISE mission finished its work.

That was a significant omission, because the WISE data on the star were taken in 2010, while the first events Kepler flagged at KIC 8462 occurred in March of 2011, with a long series of events beginning in February of 2013 and lasting sixty days. That gave us a small window in which something could have happened — the idea of a planetary catastrophe comes to mind, perhaps even a collision between two planets, or a planet and large asteroid. What Marengo brings to the table are observations from the Spitzer Space Telescope dating from early 2015.

We learn that the Spitzer photometry from its Infrared Array Camera (IRAC) finds no strong infrared excess — no significant amount of circumstellar dust can be detected two years after the 2013 dimming event at KIC 8462. Here is what Marengo concludes from this:

The absence of strong infrared excess at the time of the IRAC observations (after the dimming events) implied by our 4.5 µm 3σ limit suggests that the phenomenon observed by Kepler produced a very small amount of dust. Alternatively, if significant quantity of dust is present, it must be located at large distance from the star.

This seems to preclude catastrophic scenarios, while leaving a cometary solution intact. The paper continues:

As noted by B15 [this is the Boyajian paper], this makes the scenarios very unlikely in which the dimming events are caused by a catastrophic collision in KIC 8462852 asteroid belt, a giant impact disrupting a planet in the system, or a population of dust-enshrouded planetesimals. All these scenarios would produce very large amount of dust dispersed along the orbits of the debris, resulting in more mid-IR emission than what can be inferred from the optical depth of the dust seen passing along our line of sight to the star. Our limit (two times lower than the limit based on WISE data) further reduces the odds for these scenarios. 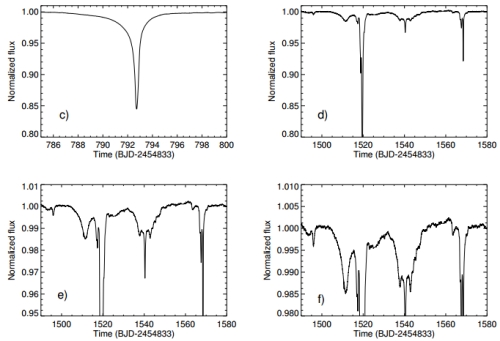 Tabetha Boyajian’s paper analyzed the natural phenomena that could account for KIC 8462’s light curve and concluded that a family of exocomets was the most promising explanation. Here the idea is that we have a family of comets in a highly elliptical orbit that has moved between us and the star, an idea that would be consistent with the lack of a strong infrared signature. Marengo has reached the same conclusion now that we are able to discount the idea of a large collision within the system. Both Boyajian and Marengo favor the comet hypothesis because it does not require a circular orbit and allows associated dust to quickly move away from the star.

In Marengo’s analysis, this fits the data, as the two-year gap between the Kepler light curves and the observations from Spitzer provide enough time for cometary debris to move several AU from the zone of tidal destruction from the star. The paper adds:

At such a distance, the thermal emission from the dust would be peaked at longer wavelengths and undetectable by IRAC. A robust detection at longer wavelengths (where the fractional brightness of the debris with respect to the star would be more favorable) will allow the determination of the distance of the cometary fragments and constrain the geometry of this scenario.

So we have a way to proceed here. Marengo notes that the measurements his paper presents cannot reveal the temperature or the luminosity of the dust that would be associated with such a family of comets, but long-term infrared monitoring would allow us to constrain both. The other day I also mentioned the small red dwarf (about 850 AU out) that could be the cause of instabilities in any Oort Cloud-like collection of comets around KIC 8462. Boyajian’s paper makes the case for measuring the motion or possible orbit (if bound) of this star as a way to tighten predictions on the timescale and repeatability of any associated comet showers.

Marengo dismisses SETI study of KIC 8462, with specific reference to Jason Wright’s recent paper on the matter, as “wild speculations,” an unfortunate phrase because Wright’s shrewd and analytical discussion of these matters has been anything but ‘wild.’