A quick follow-up on our most recent discussion of KIC 8462852 (and thanks to all for the continuing high level of discussion in the comments) because today’s topic touches on a bit of the same ground. Centauri Dreams regular Harry Ray was first to notice a paper from Eva Bodman and Alice Quillen (University of Rochester) titled “KIC 8462852: Transit of a Large Comet Family.” From the paper:

…if the comet family model is correct, there is likely a planetary companion forming sungrazers. Since the comets are still tightly clustered within each dip, a disruption event likely occurred recently within orbit, like tidal disruption by the star. This comet family model does not explain the large dip observed around day 800 and treats it as unrelated to the ones starting at day 1500. The flux changes too smoothly and too slowly to be easily explained with a simple comet family model.

I’ve only had the chance to glance at this work so far, but it’s heartening to see another paper analyzing the KIC 8462852 light curves. Massimo Marengo (Iowa State), whose own paper we just looked at, notes in the comments to that article that star-grazing comets regularly fragment, and to produce a ‘family of comets’ at KIC 8462852 simply requires a large, icy body (think, for example, of a Kuiper Belt object) breaking up after a close pass by the star. The follow-up work that Marengo, Hulsebus and Willis recommend in their paper give us a useful way to proceed.

Addendum: Dr. Marengo just alerted me to another new paper, one in which he had a hand. It’s Lisse et al., “IRTF/SPEX Observations of the Unusual Kepler Lightcurve System KIC8462852,” now available here on the arXiv site. From the abstract, this interesting bit:

Our results are inconsistent with large amounts of static close-in obscuring material or the unusual behavior of a YSO system, but are consistent with the favored episodic models of a Gyr old stellar system favored by Boyajian et al. (2015). We speculate that KIC8462852, like the ~1.4 Gyr old F2V system η Corvi (Wyatt et al. 2005, Chen et al. 2006, Lisse et al. 2012), is undergoing a Late Heavy Bombardment, but is only in its very early stages. 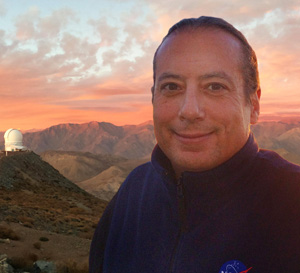 The thought of comets on interesting courses provides a helpful segue into today’s topic, a study by Paul Kalas (UC-Berkeley) and colleagues that looks at the star HD 106906, where images from the Gemini Planet Imager and new analysis of data from the Hubble instrument show us a cometary belt that is lopsided. The disturbed nature of this solar system is obvious, telling us of likely planetary interactions that caused the comet disruptions and may well have caused an exoplanet seen in the GPI image to be driven to the remote outskirts of its system.

We may be looking at disruptions caused by a passing star, although the researchers do not rule out a second massive planet as the culprit in the HD 106906 system. The planet HD 106906 b was discovered by Vanessa Bailey (University of Arizona) in 2014, a gas giant of approximately eleven times Jupiter’s mass. 300 light years from us in the constellation Crux, the young star (about 13 million years old) is separated from its companion by an eyebrow-raising 650 AU. This is sixteen times farther than Pluto is from the Sun, a region far beyond where planets are normally thought to form. 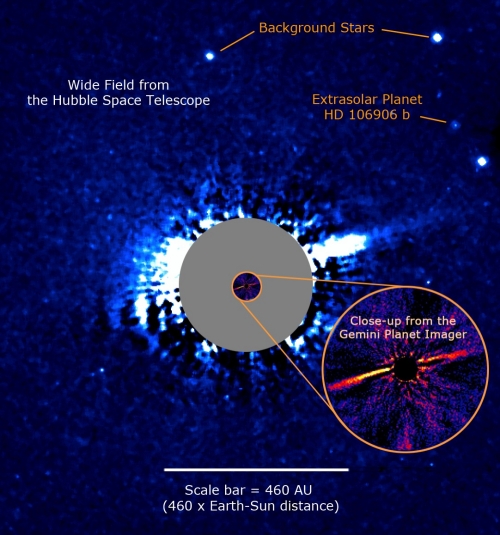 Image (click to enlarge): Two direct images of the cometary dust and exoplanet surrounding the young star HD 106906. The wider field in blue shows Hubble Space Telescope data where the star’s blinding light is artificially eclipsed (gray circular mask). The point to the upper right is an 11 Jupiter mass planet located over 650 times the Earth-Sun distance. A new discovery in these Hubble observations is an extremely asymmetric nebulosity indicating a dynamically disturbed system of comets. Surprisingly, the planet is located 21 degrees above the plane of the nebulosity. The circular orange inset shows a region much closer to the star that can only be detected using advanced adaptive optics from the ground-based Gemini Observatory. Using the Gemini Planet Imager (GPI), researchers found a narrow loop of nebulosity suggesting that a planetary system formed close to the star, but somehow the architecture of the outer regions is severely disrupted. Credit: Paul Kalas / UC Berkeley.

Several explanations for the location of this planet can be advanced, one of them being that the planet formed where it is today from its own cloud of gas and dust, but the Kalas paper looks at the options involving system disruption. For archival images from Hubble’s Advanced Camera for Surveys show us that HD 106906 is surrounded by a ring of material reminiscent of our own Kuiper Belt, with a largely empty central region, about 50 AU in radius, that implies a planetary system has formed there.

The outer ring, however, extends further than expected and is lopsided, reaching almost out to the known planet on one side, while being thick and truncated on the side opposite the planet. Moreover, the planet’s orbit appears to be tilted 21 degrees away from the plane of the inner system. “These discoveries,” said Kalas, “suggest that the entire planetary system has been recently jostled by an unknown perturbation to its current asymmetric state.”

In a UC Berkeley news release, Kalas adds this:

“We think that the planet itself could have captured material from the comet belt, and that the planet is surrounded by a large dust ring or dust shroud. We conducted three tests and found tentative evidence for a dust cloud, but the jury is still out.”

The paper analyzes three dynamical scenarios, two of which link the planet with the large-scale disk asymmetry, while the third assumes a stellar flyby that perturbed the disk, causing the asymmetry but not implicating the planet in its formation. If the planet is surrounded by a dust shroud or ring, this along with the misshapen debris belt would point to a planet that formed in the inner system and experienced gravitational interactions that forced it into the present outer orbit, as opposed to a planet that formed in that remote region in the first place.

Focusing in on dust near the planet, Kalas and colleagues conducted several experiments in their search for evidence of a circumplanetary disk. From the paper:

Based on the combination of evidence from the IR color, HST optical radial profile, and the optical flux level, we conclude that there may be a disk of material that was either captured in an encounter with the primary star’s disk, or retained from the time of formation of the planetary mass companion. Additional observations are required to clarify these tentative conclusions about the environment surrounding HD 106906b.

So we have only tentative evidence for a dust cloud of captured material surrounding the planet, perhaps as a large dust ring, but the paper outlines follow-up observations that can clarify the situation. In any case, we are learning how violent a place a young solar system can be, with gravitational disturbances that can profoundly affect dust and debris disks and potentially eject entire planets from the inner system. A passing star could explain the initial disruption here. We now wait to learn how a possibly ejected planet further affects the system’s configuration.

Next post: Kepler: A New Look at False Positives