I think you’ll find Jon Lomberg’s new essay in Slate as interesting as I do. We Need a World Cup for SETI uses a familiar figure at many sports events — the guy in the stands holding up a Biblical reference on a poster — to dig into a far more interesting issue. How does one go about maximizing visibility? The guy with the sign knows how to do it and if we think about his methods, we can better understand SETI.

For as we think about radio and optical SETI, we’re usually looking for signals that have been intentionally sent. Here we run into the particularly tricky business of trying to understand the thinking of an alien being, but there are certain principles that may apply to any civilization trying to send out a beacon-like message. The message needs to be short, cheap, easy to find, and in a place where it’s likely to be seen. So what kind of beacon is this going to be?

We’ve discussed ‘Benford beacons’ in these pages before (see, among others in the archive, Detecting a ‘Funeral Pyre’ Beacon). A beacon announcing little more than ‘We Are Here’ could be used to attract the attention of any receiving culture, after which we (the receivers) would apply our resources to looking harder at the source. But from the standpoint of efficiency and economy, a brief, bright beacon is best. James and Gregory Benford have addressed the matter in two key papers cited at the end of this essay. Let me quote a brief bit of one:

No technology available in the near-term will allow us to deliver powerful signals every minute of the day over a span of multiple epochs… But we might be able to make a beacon that works more efficiently, by targeting only those star systems where life seems most likely, and then pinging them each in turn, repeating the cycle every few months or so. Presumably, if a curious civilization caught one transmission, it would train its telescopes on that exact spot until the next part of the beacon’s message arrived. This more sensible approach—a sort of Energy Star specification for SETI—would save enough power to keep the beacon running for millions of years.

The Benfords bring useful synergies to bear on the matter. Jim is a plasma physicist — he knows all about beaming — while Greg is both physicist and science fiction author, a man who has speculated for decades on the workings of extraterrestrial civilizations. Jim’s son Dominic, also active in the beacon work, is a physicist at NASA GSFC. Beacons like the Benfords are suggesting are different from the kind of directed beacon SETI has long looked for, one that demands intense focus on stars in the hopes of finding continually broadcasting signals. A Benford beacon puts out a signal we would perceive as intermittent, a brief pulse. 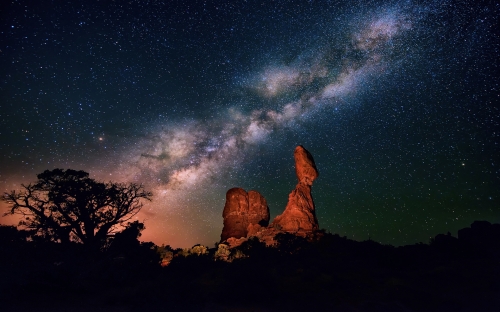 Image: What kind of signal to look for amidst 200 billion stars? Credit: Center for Planetary Science.

You can see that this puts the premium on what SETI people call ‘dwell times,’ i.e., the time we look at a particular target. In his Slate essay, Lomberg points out that there is a major timing issue here. Just how long would a beacon like this take before it repeated?

If you ever detect a possible beacon, you have to remain on target long enough for it to repeat—and who knows how long you have to wait? For an ancient and long-lived society, with perspectives far longer than our 10,000-year civilization, that might be a long time. Their notion of patience might be very different from ours. They’re aliens, after all. Of one thing I am sure: Any brief, potentially artificial signal should be closely watched for a repeat. A new approach to SETI could involve unbroken observation of some of the special directions on the sky.

Given that open question, we still need to maximize the possibilities, and I think Lomberg is right in emphasizing a strategy of constant listening. How to do this? Paul Shuch, the canny and deeply dedicated executive director of the SETI League, has long advocated getting away from what he calls ‘soda straw’ SETI, in which we perform a deep study of a target for only a short period of time before moving on. Instead, Shuch backs attempts like Project Argus, the SETI League’s microwave SETI effort aimed at providing continuous, full-sky coverage.

The notion here is to deploy and coordinate about 5000 small radio telescopes around the world, an attempt to provide continuous monitoring of the sky in real time. A station for Project Argus is not a huge dish but an amateur installation fully capable of detecting a Benford beacon’s transient signal if it should occur. In terms of cost, such a site has more in common with amateur radio than with Arecibo-style astronomy. It could be built for no more than a few thousand dollars and, depending on the builder, perhaps for less. 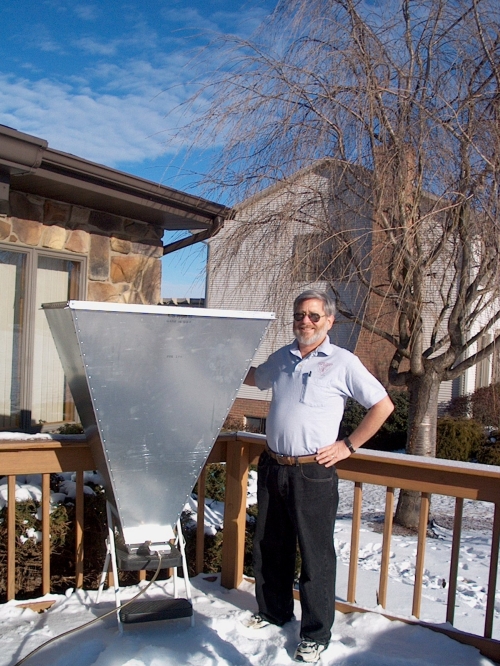 Image: H. Paul Shuch, N6TX, uses the SETI Horn of Plenty antenna for portable operations when away from his Project Argus station FN11lh. The horn, which fits in the back of a minivan, is ideal for classroom demonstrations, exhibiting +20 dBi of gain at 1.4 GHz. Credit: SETI League.

And yes, the famous “Wow Signal,” a one-off detection via Ohio State’s Big Ear radio telescope in 1977, does seem to fit the model of a Benford beacon, in being powerful, brief, and never seen again. How should we look for the next “Wow Signal”? Science fiction author David Brin backs the Project Argus idea in The Search for Extraterrestrial Intelligence (SETI) and Whether to Send “Messages” (METI):

Clearly SETI would benefit from a supplementary system that covers the Earth, searching continuously and broadly for pings that are sent by ETCs narrowly. That system would be ready to detect and pounce upon any new Wow Signals and automatically net-notify larger telescopes to zoom quickly on the source. Not a competitor with classic SETI, this second layer could serve as an ideal alert-generating system, filling a glaring deficit in the current approach.

In Greek mythology, Argus was a giant whose epithet “all seeing” (panoptes) spawned depictions of him with multiple eyes. Argus always had a few eyes open, thus becoming the perfect watchman. Can we find a way to maximize the potential of Project Argus?

For while the endeavor is loaded with promise and benefits from the skills and energies of people like Shuch, it has been unable to reach anything like the needed 5000 stations for continuous coverage. This is why a comment by the above-quoted David Brin on a SETI-oriented mailing list recently caught my eye. Brin notes that even as ‘soda straw’ SETI continues, we have the option of energizing the Project Argus idea. We already see wealthy people like Paul Allen and Yuri Milner becoming deeply involved in SETI. What if we could find a similar figure to create a Project Argus kit?

The idea here would be to take the building of a home receiving station for SETI out of the realm of sophisticated electronic technology and into into a turn-key kit that could be purchased for several hundred dollars and simply attached to a basic backyard dish. Like SETI@Home, a Web-based collection system could be used to track the ongoing datastream. A global system for transient detections like this is the kind of network that could find a Benford beacon. 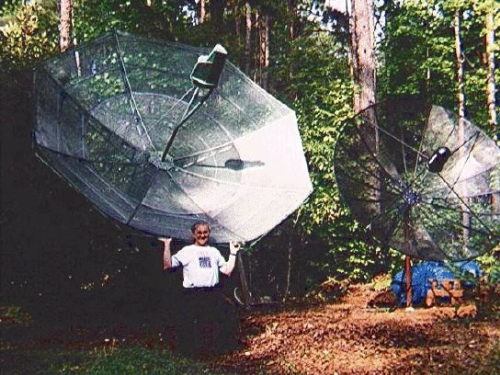 Image: My friend Mike Gingell, KN4BS, shows off his two dishes, 12 and 10 feet in diameter, used for radio astronomy, satellite TV, and of course SETI. I’m sorry to say that Mike passed away last year, but he remained fascinated by SETI prospects until the end. Credit: Mike Gingell / SETI League.

We need to keep an eye on the possibilities that can emerge from private funding and the work of skilled amateur radio astronomers. But we also need to grow the numbers of those who have the means to participate. An updated version of Project Argus could supplement and extend the original, taking what began as a superb idea for engineers working with home equipment into the realm of everyday users with a yen to use digital tools to explore SETI’s possibilities. Make the kit cheap enough and straightforward to operate and the transient detection system we need emerges, an approach to SETI that widens our capabilities even as traditional SETI continues.