An asteroid shaped something like a sweet potato swept by the Earth on December 24, though at a sufficient distance (28 times further away than the Moon) to pose no hazard to our planet. 2003 SD220 was making the first of five predicted encounters within the next twelve years, and the measurements made by the planetary radar system at Arecibo on the asteroid’s shape, rotation and other properties will now be useful in refining its orbit. The Jet Propulsion Laboratory’s Goldstone Solar System Radar and the National Radio Astronomy Observatory’s Green Bank Telescope and Very Long Baseline Array also contributed data on the asteroid.

Highly elongated and more than 2 kilometers long, 2003 SD220 is of interest as a possible target for a future space mission, not only because asteroids should give us clues about conditions in the early Solar System, but also because near-Earth asteroids need to be well understood in case we one day find ourselves dealing with a potential impactor. 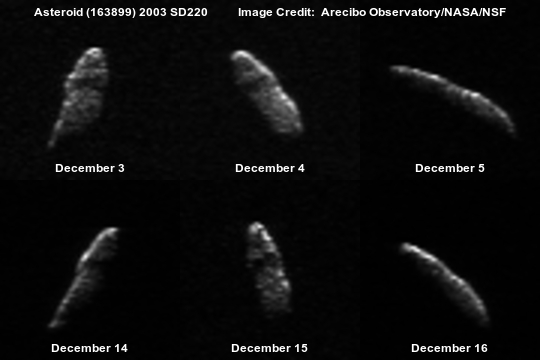 But as we assess impact probabilities over long periods of time, are asteroids the prime concern? New work out of Armagh Observatory and the University of Buckingham (UK) indicates that we should keep an eye on the outer Solar System, where hundreds of giant comets have been discovered within the last two decades. Known as centaurs, these objects ply unstable orbits that cross the paths of the gas giants. Such encounters can change their trajectories, meaning we need to assess their orbits with care.

The typical centaur is in the 50 to 100 kilometer range — some are larger — with more mass, as this Royal Astronomical Society news release tells us, than the entire population of Earth-crossing asteroids found to date. A centaur deflected onto a trajectory that crosses Earth’s orbit is expected to appear every 40,000 to 100,000 years, according to this work. So while the odds of a direct impact by an intact centaur are slight, these objects are likely to disintegrate as they approach the inner system, with cometary debris posing a potential hazard.

Is cometary dust and debris rather than a single large impact a likely scenario for past extinction events? The paper is currently behind a firewall, but lead author Bill Napier (University of Buckingham) had speculated on the possibility in a paper that appeared earlier this year:

The main asteroid belt seems inadequate to supply the larger impactors, and large cometary populations have now been revealed extending to beyond the planetary system, with the potential to be thrown into the near-Earth environment. The top-heavy mass distribution of these comets, their likely disintegration history when thrown into short-period orbits, and the potential of their debris to cause deleterious effects, make them likely candidates for the mass extinctions observed in the terrestrial record and the associated geological disturbances. The mechanisms involved are a matter for detailed stratigraphic studies; it is suggested here that prolonged atmospheric perturbations arising from fireball storms and dusting are the most energy efficient means of collapsing food chains, yielding both marine and land extinctions. 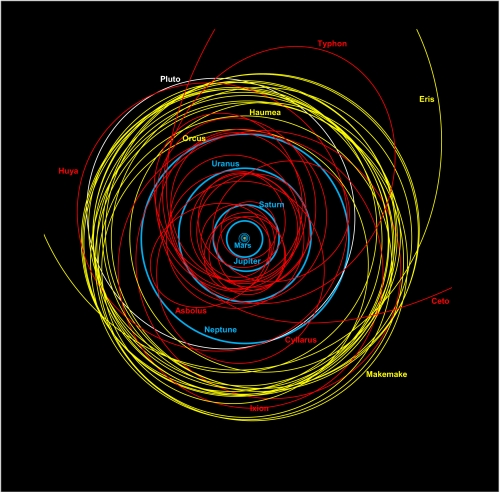 Image: The outer solar system as we now recognise it. At the centre of the map is the Sun, and close to it the tiny orbits of the terrestrial planets (Mercury, Venus, Earth and Mars). Moving outwards and shown in bright blue are the near-circular paths of the giant planets: Jupiter, Saturn, Uranus and Neptune. The orbit of Pluto is shown in white. Staying perpetually beyond Neptune are the trans-Neptunian objects (TNOs), in yellow: seventeen TNO orbits are shown here, with the total discovered population at present being over 1,500. Shown in red are the orbits of 22 Centaurs (out of about 400 known objects), and these are essentially giant comets (most are 50-100 km in size, but some are several hundred km in diameter). Because the Centaurs cross the paths of the major planets, their orbits are unstable: some will eventually be ejected from the solar system, but others will be thrown onto trajectories bringing them inwards. Credit: Duncan Steel.

The image above gives us a sense of how our view of the Solar System has changed over the past century, as we’ve moved from nine planets and an asteroid belt moving through supposedly empty space to a wild jumble of objects including not just asteroids and comets but a vast population of trans-Neptunian objects. You can see how the centaurs cross planetary orbits in the image, and it’s possible that some are captured along the way. Saturn’s moon Phoebe may well have been a centaur that was drawn into Saturn’s gravity well long ago.

“In the last three decades we have invested a lot of effort in tracking and analysing the risk of a collision between the Earth and an asteroid. Our work suggests we need to look beyond our immediate neighbourhood too, and look out beyond the orbit of Jupiter to find centaurs. If we are right, then these distant comets could be a serious hazard, and it’s time to understand them better.”