Looking Ahead to OSIRIS-REx

Back when I was in grade school, we put in several months studying ancient Egyptian culture. I can remember becoming fascinated with the pyramid builders and wanting to immerse myself in the world that produced them. But I don’t think I ever reached the multidisciplinary level of a third-grader named Michael Puzio, who named the asteroid now called Bennu. The sharp-eyed Puzio entered a contest to name the asteroid that the OSIRIS-REx mission will fly to, choosing the Egyptian deity Bennu because he thought the spacecraft resembled the mythological bird. 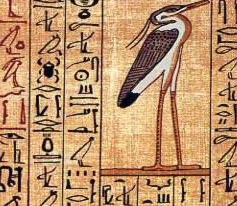 I call Michael Puzio one smart third-grader, and I’m happy that yesterday’s post, on the near-Earth asteroid 2003 SD220, brought him to mind. The close pass by 2003 SD220 on Christmas Eve prompted a series of radar studies that we’ll now use to help refine its orbit. Bennu is likewise nearby, though at about 500 meters a bit smaller than 2003 SD220, and it too has been the object of study by the planetary radars at Arecibo and Goldstone. We also know that Bennu bears watching as a possible future impactor even if the odds seem slight.

To make sure about those odds, it’s necessary to learn a lot more about objects like Bennu so we can see how tiny factors like the Yarkovsky effect may change its trajectory over time. The latter is determined partly by the shape of the asteroid, whose uneven surface and varied composition result in heat from the Sun being unevenly distributed and emitted. A slight push comes from all this, the smallest of nudges, which over time can add up to the kind of trajectory change that could spell the difference between a close call and something worse.

You can imagine how hard all this would be to calculate, but we need to factor the Yarkovsky effect into any potential asteroid mitigation efforts we may someday have to make. That makes measuring the effect and relating it to accurate mapping of the asteroid’s surface a priority. 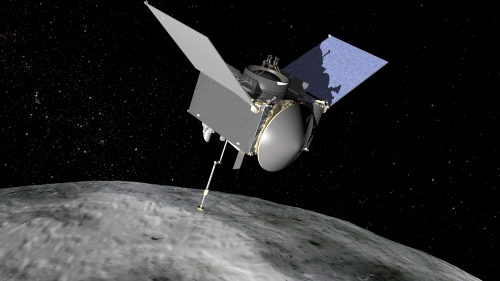 Image: Artist’s conception of the OSIRIS-REx spacecraft during its Touch-and-Go sampling maneuver at Bennu. Credit: NASA/Goddard.

OSIRIS-REx is another of those acronyms that keeps on giving — it stands for Origins Spectral Interpretation Resource Identification Security Regolith Explorer, and pretty much sums up all aspects of the mission that I know about. Launch is planned for September of 2016, with investigation of Bennu by a suite of instruments at the target and a 60-gram sample return. Here we’re trying to learn not only about what such asteroids are made of in case we ever have to nudge one, but also to study materials that may help us understand how water and perhaps organic molecules made their way to the Earth in the early days of the Solar System.

In mid-December, the Canadian Space Agency’s OSIRIS-REx Laser Altimeter (OLA) arrived at Lockheed Martin Space Systems in Denver for integration into the spacecraft. The instrument will produce three-dimensional maps that will help the mission team choose the best site for sample collection. OLA is a LIDAR (Light Detecting and Ranging) system that should tell us much about the asteroid’s topography, surface processes, evolution and overall shape.

“OLA will measure the shape and topography of Bennu to a much higher fidelity and with much greater efficiency than any planetary science mission has achieved. This information is essential to understanding the evolution and current state of the asteroid. It also provides invaluable information in aid of retrieving a sample of Bennu for return to Earth.”

OSIRIS-REx should reach Bennu in 2018, with sample return scheduled for 2023. The first science data are expected to be returned during an Earth gravity assist in September of 2017. The delivery of OLA complements the July delivery of OVIRS (the OSIRIS-REx Visible and Infrared Spectrometer), which will study spectral signatures from the surface to measure minerals and chemicals at proposed sample sites. All told, five instruments are being integrated into the spacecraft as the system-level environmental testing program proceeds.

It’s all too easy to sensationalize the possibilities of impacts on our planet, but wild-eyed stories in the media don’t negate what common prudence dictates. We must incorporate asteroid mitigation into the rest of our scientific work at near-Earth asteroids. If we never have to use the various technologies that have been discussed for changing an asteroid trajectory, so much the better, but finding out as much as we can about the composition and orbital characteristics of these objects is the sensible way to prepare ourselves for any eventuality. The best insurance is the policy you never have to use.