With our focus on nearby stars for both exoplanet detection and SETI work, I don’t often find the time to talk about cosmology and ‘deep sky’ observations, although galaxy structure and formation are an interest of mine. But today I have a story too good to pass up, involving using gravitational lensing and time delays in how light reaches us to investigate events at the edge of the visible universe. In such work, the curvature of spacetime itself is part of our toolkit.

Consider four images found around a foreground galaxy that were created by a background supernova. Here celestial alignments lead us to successful prediction, and for the first time, a supernova appears where astronomers have said it would. Or I should say, ‘re-appears.’

The elliptical galaxy in question is located within the galaxy cluster MACS J1149+2223, which since 2012 has been known to lie between us and a background galaxy whose light is being magnified by the lens of the cluster. In November of 2014, astronomers found four separate images of a supernova from this background galaxy, appearing in the form of a so-called Einstein Cross. Have a look at the image below, where the cross-shaped pattern is clear. 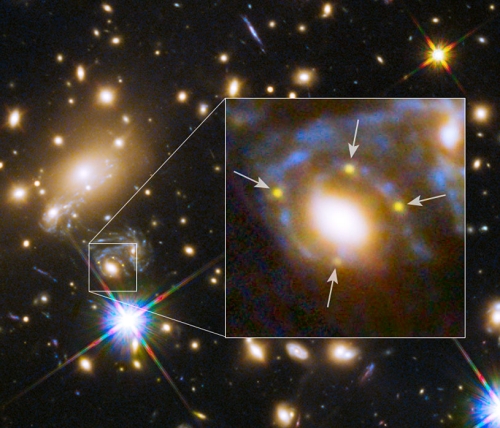 Now we have word that on December 11 of this year, a team of astronomers successfully predicted a fifth appearance of the supernova. Of course, the supernova event can occur but once, but we are seeing multiple images whose light has in each case taken a different path to reach us, affected by visible and dark matter in the intervening cluster. This means the images from the background galaxy are somewhat out of synch. A team of astronomers involved in the Grism Lens Amplified Survey from Space (GLASS) and a team from another project called Frontier Fields has been able to model these lensing events with great accuracy.

Tommaso Treu (UCLA) is lead author of one of two papers on this work, which looks at the details of the modeling:

“We used seven different models of the cluster to calculate when and where the supernova was going to appear in the future. It was a huge effort from the community to gather the necessary input data using Hubble, VLT-MUSE, and Keck and to construct the lens models. And remarkably all seven models predicted approximately the same time frame for when the new image of the exploding star would appear.”

The supernova is nicknamed Refsdal, a reference to the Norwegian astronomer Sjur Refsdal, who discussed using time-delayed images from a lensed supernova back in the 1960s. Refsdal believed that such images could be a useful tool for studying the universe’s expansion.

Supernova Refsdal turned up exactly when the astronomers had predicted. Hubble has been at work on MACS J1149 since the end of October, making a series of periodic observations by way of testing the models. The model predicting the supernova’s reappearance was also based on data drawn from the Multi Unit Spectroscopic Explorer (MUSE), attached to ESO’s Very Large Telescope (VLT) at Paranal. This November 25 ESO announcement highlights the prediction, which described the supernova’s brightness as well as its timing and location.

The paper on the supernova’s reappearance points out that despite Refsdal’s early paper, a gravitationally lensed supernova with multiple resolved images was not found in the subsequent five decades (although several individual images have been found with magnification caused by lensing). But astronomers have been able to work on time delays within lensed systems by studying multiply imaged quasars, an effort that has been going on since the 1970s. The ‘reappearance’ paper draws two conclusions about the result of the supernova study:

First, SN Refsdal indeed reappeared approximately as predicted, implying that the unknown systematic uncertainties are not substantially larger than the random uncertainties, at least for some models. This is a remarkable and powerful validation of the model predictions specifically and of general relativity indirectly.

And now that we have a successful prediction, we can start to apply its lessons to the modeling process going forward:

The second conclusion is that already this first detection provides some discriminatory power: not all models fare equally well. Grillo-g, Oguri-g, Oguri-a, and Sharon-a [referring to earlier studies] appear to be the ones that match the observations most closely. In general most models seem to predict a slightly higher magnification ratio than observed, or shorter delays. A detailed statistical analysis of the agreement between the model predictions and the observations will have to wait for the actual measurement of the magnification and time delays, which will require analysis of the full light curve past its peak during 2016. 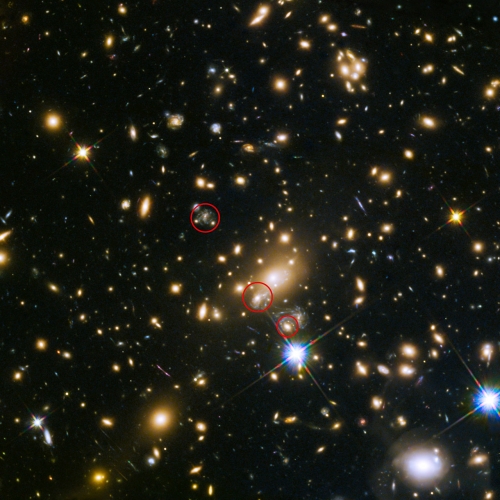 Image: This NASA/ESA Hubble Space Telescope image shows the positions of the past, present and predicted future appearances of the Refsdal supernova behind the galaxy cluster MACS J1149+2223. The uppermost circle shows the position of the supernova as it could have been seen in 1995 (but was not actually observed). The lowermost circle shows the galaxy which lensed the Refsdal Supernova to produce four images — a discovery made in late 2014. The middle circle shows the predicted position of the reappearing supernova in late 2015 or early 2016. Credit: NASA, ESA, S. Rodney (John Hopkins University, USA) and the FrontierSN team; T. Treu (University of California Los Angeles, USA), P. Kelly (University of California Berkeley, USA) and the GLASS team; J. Lotz (STScI) and the Frontier Fields team; M. Postman (STScI) and the CLASH team; and Z. Levay (STScI).

Never before has the appearance of a supernova at a particular time and location in the sky been successfully predicted. We’re now in position to test models involving magnification and time delays for other lensed supernovae. The time delays we see in multiple images of the same event become tools for probing not just the properties of the lensing galaxy and background object, but the properties of cosmic expansion. The fifth image of supernova Refsdal is influenced not only by an individual galaxy but by the gravitational potential of the entire MACS J1149.5+2223 cluster, a reminder of the complexity of the underlying analysis.