Making the call on the age of a star is tricky business. Yet we need to master the technique, for stellar age is a window into a star’s astrophysical properties, important in themselves and for understanding the star in the context of its interstellar environment. And for those of us who look at SETI and related issues, the age of a star can be a key factor — is the star old enough to have produced life on its planets, and perhaps a technological civilization?

Until recently, luminosity and surface temperature were the properties that helped us make a rough estimate of a star’s age, which gives insight into how challenging the problem is. These are factors that, while they do change over time, give us only approximations of age. More recently, researchers have learned to study sound waves deep in the stellar interior, a method that is confined to bright targets and cannot help us with vast numbers of dimmer stars. Called asteroseismology, this method has helped our estimates of stellar ages among old field stars. 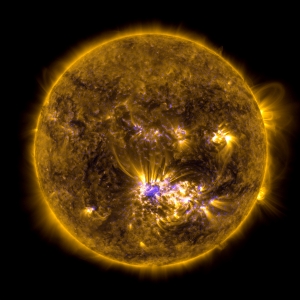 Enter gyrochronology. Within the last decade, we’ve learned that stellar rotation rates can help us with a star’s age, for a star’s spin is slowed due to the interactions between its magnetic field and its stellar wind. The latter, a flow of charged particles moving away from the star, helps to inflate the ‘bubble’ in our system we know as the heliosphere. But these gases also become caught in the magnetic field as they spin outward, causing changes to the star’s angular momentum.

Thus a star’s magnetic field can over time brake its spin rate. Assuming we know the rotation rate and mass of the star, we can use the method to calculate its age. Now we have new work out of the Carnegie Institution for Science that should be helpful at refining this technique. What Jennifer van Saders and team have discovered is that our models for predicting the slowdown have been off. The braking action of the magnetic field becomes weaker as stars get older, becoming much less accurate for stars more than halfway through their lifetimes.

Appearing in Nature, the paper is based on data from the Kepler spacecraft, which makes it possible to test gyrochronology for a large number of stars older than the Sun. Kepler gives us a significant sample of stars whose rotation rate is measurable and whose asteroseismic properties are now known.

If, as appears the case, there is a change in the way the magnetic field interacts with the stellar wind as a star ages, then we need to find out the nature of this change and when it occurs. In any case, we have hard data that stars more evolved than the Sun rotate more rapidly than our models predict, a fact that limits the usefulness of gyrochronology in these populations. Our own Sun could be approaching the age when its magnetic field loses some of its braking power.

Bear in mind that we are talking about astronomical timescales here, so whatever transition occurs may not happen for hundreds of millions of years. Moreover, the changes to the magnetic interactions are likely to take place over a long period. But the speed of the change and the process behind it point the way to future work as we try to unwrap the riddle of stellar ages. “Gyrochronology,” says van Saders, “ has the potential to be a very precise method for determining the ages of the average Sun-like star, provided we can get the calibrations correct.”

The paper is van Saders et al., “Weakened magnetic braking as the origin of anomalously rapid rotation in old field stars,” published online in Nature 4 January 2016 (abstract). Be aware as well of van Saders er al., “Rotation periods and seismic ages of KOIs – comparison with stars without detected planets from Kepler observations,” published online by Monthly Notices of the Royal Astronomical Society 11 December 2015 (abstract). This one deals with using Kepler Objects of Interest to calibrate gyrochronology, concluding that planet-hosting stars show rotational patterns similar to that of stars without any detected planets.