I can think of few things as spectacular as a globular cluster. Messier 5 is a stunning example in Serpens. With a radius of some 200 light years, M5 shines by the light of half a million stars, and at 13 billion years old, it’s one of the older globular clusters associated with our galaxy. Clusters like these orbit the galactic core, stunning chandeliers of light packed tightly with stars. The Milky Way has 158 known globulars, while M31, the Andromeda galaxy, boasts as many as 500. Giant elliptical galaxies like M87 can have thousands. 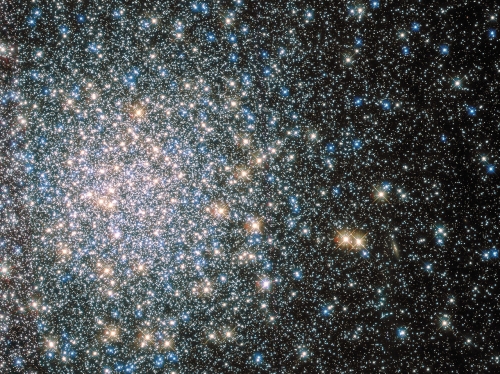 Given the age of globular clusters (an average of ten billion years), it’s a natural assumption that planets within them are going to be rare. We would expect their stars to contain few of the heavy elements demanded by planets, since elements like iron and silicon are created by earlier stellar generations. And indeed, only one globular cluster planet has been found, an apparent gas giant that accompanies a white dwarf, both orbiting a pulsar in the globular cluster M4.

A team led by David Weldrake (Max-Planck-Institut für Astronomie) reported on its large ground-based search for ‘hot Jupiters’ in the globular clusters 47 Tucanae and Omega Centauri in 2006, finding no candidates. So should we give up on the notion of planets in such environments? Rosanne Di Stefano (Harvard-Smithsonian Center for Astrophysics) thinks that would be premature. She presented the research at a press conference at the ongoing meeting of the American Astronomical Society, which this year occurs in Kissimmee, Florida.

Working with Alak Ray (Tata Institute of Fundamental Research, Mumbai), Di Stefano points out that we have found low-metallicity stars known to have planets elsewhere in the galaxy. And while we can couple the occurrence of Jupiter-class planets with stars that have higher metallicity, there seems to be no such correlation when we’re dealing with smaller, rocky worlds like the Earth. Perhaps, then, we shouldn’t dismiss planets in globular clusters.

Di Stefano also argues that while stellar distances are small within a globular cluster, this may not work against the possibility of habitable planets, and may actually be a benefit for any civilizations that do emerge there. Most of the stars in these ancient clusters are red dwarfs with lifetimes in the trillions of years. The habitable zone around such small stars is close in, making potentially habitable worlds relatively safe from disastrous stellar interactions.

So let’s imagine the possibility of life evolving in ten billion year old globulars. In our comparatively sparse region of the Milky Way, the nearest star is presently some 4.2 light years away, a staggering 40 trillion kilometers. Within a large globular cluster, the nearest star could be twenty times closer. Imagine a star at roughly 15000 AU or somewhat less, about the same distance from our Sun as Proxima Centauri is from Centauri A and B. Then open out the view: Imagine fully 10,000 stars closer to us than Alpha Centauri, the night sky ablaze.

I would see this as a powerful inducement to developing interstellar technologies for any civilization that happened to emerge, and Di Stefano agrees, according to this CfA news release. The ‘globular cluster opportunity’ that she identifies would play off the fact that broadcasting messages to nearby stars would presume round-trip travel times not a lot longer than it took to get letters from the United States to Europe in the 18th Century by sail.

As to this site’s own idée fixe, Stefano sees further good news:

That does give me pause — imagine one of our Voyagers already a tenth of the way to another star. If civilizations can develop inside globular clusters, they could be just what Di Stefano says, “the first place in which intelligent life is identified in our galaxy.” The problem for our current exoplanet methods is that even the closest globular cluster is a long way from us — both M4 and NGC 6397 are approximately 7200 light years out. Gravitational microlensing may produce some planetary finds, and perhaps new transit efforts could be effective, though we would be working on the outskirts of the cluster and small rocky worlds would be a tough catch.

Even so, it’s a breathtaking prospect, because my imagination is fired by the possibility of intelligent life looking out on a sky packed with stars from the center of a globular cluster. I also take heart from the fact that there is much we don’t know about such clusters. M5, for example, dates back close to the beginning of our universe, yet we know that along with its ancient stars, it also has a population of the young blue stars called ‘blue stragglers.’ Explaining their formation should help us better understand the dynamics of this dazzling environment.

Next post: HD 7449Ab: Choreography of a Planetary Dance