Space Habitats Beyond LEO: A Short Step Towards the Stars

Building a space infrastructure is doubtless a prerequisite for interstellar flight. But the questions we need to answer in the near-term are vital. Even to get to Mars, we subject our astronauts to radiation and prolonged weightlessness. For that matter, can humans live in Mars’ light gravity long enough to build sustainable colonies without suffering long-term physical problems? Gregory Matloff has some thoughts on how to get answers, involving the kind of space facility we can build with our current technologies. The author of The Starflight Handbook (Wiley, 1989) and numerous other books including Solar Sails (Copernicus 2008) and Deep Space Probes (Springer, 2005), Greg has played a major role in the development of interstellar propulsion concepts. His latest title is Starlight, Starbright (Curtis, 2015). 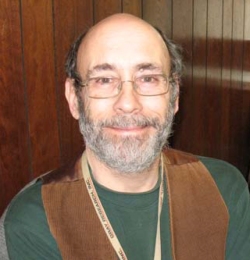 The recent demonstrations of successful rocket recovery by Blue Origin and SpaceX herald a new era of space exploration and development. We can expect, as rocket stages routinely return for reuse from the fringes of space, that the cost of space travel will fall dramatically.

Some in the astronautics community would like to settle the Moon; others have their eyes set on Mars. Many would rather commit to the construction of solar power satellites, efforts to mine and/or divert Near Earth Asteroids (NEAs), or construct enormous cities in space such as the O’Neill Lagrange Point colonies.

But before we can begin any or all of these endeavors, we need to answer some fundamental questions regarding human life beyond the confines of our home planet. Will humans thrive under lunar or martian gravity? Can children be conceived in extraterrestrial environments? What is the safe threshold for human exposure to high-Z galactic cosmic rays (GCRs)?

To address these issues we might require a dedicated facility in Earth orbit. Such a facility should be in a higher orbit than the International Space Station (ISS) so that frequent reboosting to compensate for atmospheric drag is not required. It should be within the ionosphere so that electrodynamic tethers (ETs) can be used for occasional reboosting without the use of propellant. An orbit should be chosen to optimize partial GCR-shielding by Earth’s physical bulk. Ideally, the orbit selected should provide near-continuous sunlight so that the station’s solar panels are nearly always illuminated and experiments with closed-environment agriculture can be conducted without the inconvenience of the 90 minute day/night cycle of equatorial Low Earth Orbit (LEO). Initial crews of this venture should be trained astronauts. But before humans begin the colonization of the solar system, provision should be made for ordinary mortals to live aboard the station, at least for visits of a few months’ duration.

Another advantage of such a “proto-colony” is proximity to the Earth. Resupply is comparatively easy and not overly expensive in the developing era of booster reuse. In case of medical emergency, return to Earth is possible in a few hours. That’s a lot less than a 3-day return from the Moon or L5 or a ~1-year return from Mars.

An interesting orbit for this application has been analyzed in a 2004 Carleton University study conducted in conjunction with planning for the Canadian Aegis satellite project [1]. This is a Sun-synchronous orbit mission with an inclination of 98.19 degrees and a (circular) optimum orbital height of 699 km. At this altitude, atmospheric drag would have a minimal effect during the planned 3-year satellite life. In fact, the orbital lifetime was calculated as 110 years. The mission could still be performed for an orbital height as low as 600 km. The satellite would follow the Earth’s terminator in a “dawn-to-dusk” orbit. In such an orbit, the solar panels of a spacecraft would almost always be illuminated.

For a long-term human-occupied research facility in or near such an orbit, a number of factors must be considered. These include cosmic radiation and space debris. It is also useful to consider upper-atmosphere density variation during the solar cycle.

From a comprehensive study by Susan McKenna-Lawlor and colleagues of the deep space radiation environment [2], the one-year radiation dose limits for 30, 40, 50, and 60 year old female astronauts are respectively 0.6, 0.7, 0.82, and 0.98 Sv. Dose limits for men are about 0.18 Sv higher than for women. At a 95% confidence level, such exposures are predicted not to increase the risk of exposure-related fatal cancers by more than 3%.

Al Globus and Joe Strout have considered the radiation environment experienced within Earth-orbiting space settlements below the Van Allen radiation belt [3]. This source recommends annual radiation dose limits for the general population and pregnant women respectively at 20 mSv and 6.6 mGy (where “m” stands for milli, “Sv” stands for Sieverts and “Gy” stands for Gray). Conversion of Grays to Sieverts depends upon the type of radiation and the organs exposed. As demonstrated in Table 1 of Ref. 3, serious or fatal health effects begin to affect a developing fetus at about 100 mGy. If pregnant Earth-bound women are exposed to more than the US average 3.1 mSv of background radiation, the rates of spontaneous abortion, major fetal malformations, retardation and genetic disease are estimated respectively at 15%, 2-4%, 4%, and 8-10%. Unfortunately, these figures are not based upon exposure to energetic GCRs [3].

In their Table 5, Globus and Strout present projected habitat-crew radiation levels as functions of orbital inclination and shielding mass density [3]. Crews aboard habitats in high inclination orbits will experience higher dosages than those aboard similar habitats in near equatorial orbits. In a 90-degree inclination orbit, a crew member aboard a habitat shielded by 250 kg/m2 of water will be exposed to about 334 mSv/year. To bring radiation levels in this case below the 20 mSV/year threshold for adults in the general population requires a ~12-fold increase in shielding mass density [3].

But Table 4 of the Globus and Strout preprint demonstrates that, for a 600-km circular equatorial orbit, elimination of all shielding increases radiation dose projections to about 2X that of the habitat equipped with a 250 kg/m2 water shield. If shielding is not included and this scaling can be applied to the high-inclination orbit, expected crew dose rates will be less than 0.8 Sv/year [3]. This is within the annual dose limits for all male astronauts and female astronauts older than about 45 [2].

Early in the operational phase of this high-inclination habitat, astronauts can safely spend about a year aboard. Adults in the general public can safely endure week-long visits. Pregnant women who visit will require garments that provide additional shielding for the fetus. Some of the short-term residents aboard the habitat may be paying “hotel” guests. As discussed below, additional shielding may become available if development of this habitat is a joint private/NASA project.

Is Space Debris an Issue?

According to a 2011 NASA presentation to the United Nations Subcommittee on the Peaceful Uses of Outer Space, space debris is an issue of concern in all orbits below ~2,000 km. About 36% of catalogued debris objects are due to two incidents: the intentional destruction of Fengyun-1C in 2007 and the 2009 accidental collision between Cosmos 2251 and Iridium 33 [4].

An on-line version of the Standard Atmosphere has been consulted to evaluate exospheric molecular density at orbital heights [5]. A summary of this tabulation follows:

Note that atmospheric density levels at 600 km are in all cases far below the corresponding levels at the ISS ~400 km orbital height. But orbit adjustment will almost certainly be required during periods of peak solar activity.

Since the proposed 600-km orbital height is within the Earth’s ionosphere, there are a number of orbit-adjustment systems that require little or no expenditure of propellant. One such technology is the Electrodynamic Tether [6].

A number of inflatable space habitats have been studied extensively or are under consideration for future space missions. Two that could be applied to construction of a ~600-km proto-colony are NASA’s Transhab and Bigelow Aerospace’s BA330 (also called B330).

Transhab, which was considered by NASA for application with the ISS and might find use as a habitat module for Mars-bound astronauts, would have a launch mass of about 13,000 kg. Its in-space (post-inflation) diameter would be 8.2 m and its length would be 11 m [7]. Treating this module as a perfect cylinder, its surface area would be about 280 m2. Transhab could comfortably accommodate 6 astronauts. 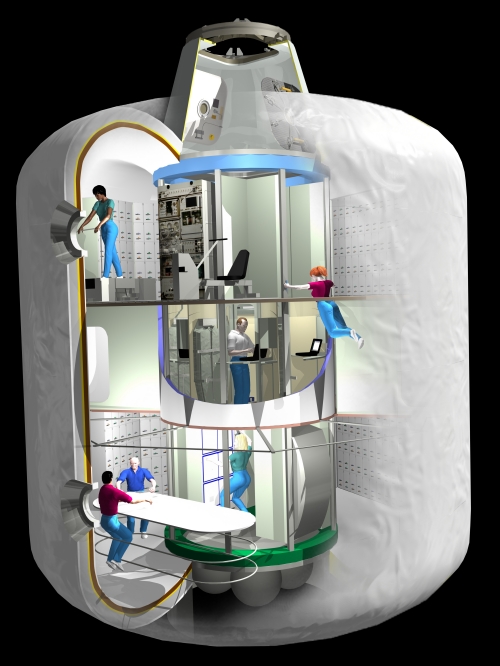 According to Wikipedia, the BA330 would have a mass of about 20,000 kg. Its length and diameter would be 13.7 m and 6.7 m, respectively. The Bigelow Aerospace website reports that the approximate length of this module would be 9.45 m. It could accommodate 6 astronauts comfortably during its projected 20-year operational life.

Both of these modules are designed for microgravity application. Since the study of the adjustment of humans and other terrestrial life forms to intermediate gravity levels might be one scientific goal of the proposed 600-km habitat, the habitat should consist of two modules arranged in dumbbell configuration connected by a variable-length spar with a hollow, pressurized interior. The rotation rate of the modules around the center could be adjusted to provide various levels of artificial gravity. Visiting spacecraft could dock at the center of the structure. It is possible that the entire disassembled and uninflated structure could be launched by a single Falcon Heavy.

One module could support the crew, which would be rotated every 3-6 months. The other module could accommodate visitors and scientific experiments. It is anticipated that visitors would pay for their week-duration experience to help support the project. Experiments would include studies of the effects of GCR and variable gravity on humans, experimental animals and experiments with in-space agriculture. The fact that the selected orbit provides near-constant exposure to sunlight should add a realistic touch to the agriculture studies. These experiments will hopefully lead to the eventual construction of in-space habitats, hotels, deep-space habitats and other facilities.

The possibility exists for cooperation between the developers of this proposed 600-km habitat and the NASA asteroid retrieval mission. Under consideration for the mid-2020’s, this mission would use the Space Launch System to robotically retrieve a ~7-meter diameter boulder and return it to high lunar orbit for further study [8]. The mass of this object in lunar orbit could exceed half a million kilograms. It is conceivable that much of this material could be used to provide GCR-shielding for Earth-orbiting habitats such as one considered here. As well as reducing on-board radiation levels, such an application would provide valuable experience to designers of deep-space habitats such as the O’Neill space colonies.

4. NASA, “USA Space Debris Environment, Operations, and Policy Updates”, Presentation to the 48th Session of the Scientific and Technical Subcommittee, Committee on the Peaceful Uses of Outer Space (7-9 February 2011).