Is Proxima Centauri a Bound Star?

About 1.4 million years from now, the K-class star Gliese 710, now 64 light years distant in the constellation Serpens, will brush past our Solar System. Moving to within 50,000 AU, the star could be expected to have an unsettling effect on cometary orbits in the Oort Cloud, perhaps dislodging some of these comets to cause them to move into our inner planetary system. An interesting scenario, particularly remembering speculation that comets were a source of water for the early Earth, and may perform a similar function in other young systems.

So just how common are such celestial encounters? We may have one at our very doorstep in the form of Proxima Centauri. The Pale Red Dot campaign that began yesterday is focusing on a red dwarf that is roughly 15,000 AU from the close binary stars Centauri A and B. If you think about what our system would look like with a red dwarf at the inner edge of the Oort Cloud, you can see that Proxima may play a large role in the evolution of the triple-star system. 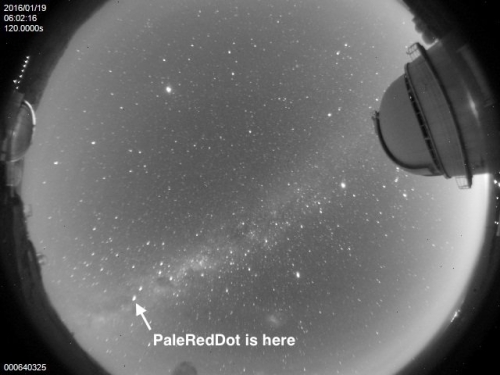 Image: Proxima Centauri, indicated by the arrow, in an image from the first night’s run at the Pale Red Dot observing campaign at La Silla. Credit: ESO/Guillem Anglada-Escudé.

Assuming, that is, that this is a bound system. It was back in 1993 that Robert Matthews and Gerard Gilmore (Cambridge University) studied kinematic data on Proxima and concluded that the star was not necessarily gravitationally bound. In fact, it was on the borderline, and could well be a star that was simply moving past Centauri A and B, having been formed elsewhere. The researchers cited the need for further kinematic data to resolve the matter.

The following year, J. Anosova (Physical Research Laboratory, Ahmedabad, India) proposed that the three Centauri stars were part of a stellar moving group, with Proxima drifting close but not necessarily bound. But the problem would not go away. Proxima’s small relative velocity in relation to Centauri A and B (0.53 ± 0.14 km s-1) makes the likelihood that it is unbound quite small, which is why the assumption of a bound triple system has generally been the rule since the star’s discovery in 1915.

Jeremy Wertheimer and Gregory Laughlin (UC-Santa Cruz) have had the most recent word, finding in 2006 that Proxima is indeed bound to Centauri A and B:

The availability of Hipparcos data has provided us with the ability to implement a significant improvement over previous studies of the α Cen system. Our results indicate that it is quite likely that Proxima Cen is gravitationally bound to the α Cen A-B pair, thus suggesting that they formed together within the same birth aggregate and that the three stars have the same ages and metallicities. As future observations bring increased accuracy to the kinematic measurements, it will likely become more obvious that Proxima Cen is bound to the α Cen A-B binary and that Proxima Cen is currently near the apastron of an eccentric orbit…

The researchers are also able to make a prediction: When we can get a more refined look at Proxima Centauri’s absolute radial velocity, we should see a value of -22.3 km s-1 < vr < -22.0 km s-1. Hence the importance of our continuing investigation of this small star. As we proceed with projects like Pale Red Dot and beyond, we should be able to eventually declare the question of Proxima’s bound status closed.

Ramifications of a Bound Proxima

This is of more than passing interest, because Proxima Centauri could well be influencing the planetary systems (if any) of the two primary Centauri stars. As I mentioned above, a star like Gl 710 passing by our system could cause disruptions in the Oort Cloud, and a passing Proxima Centauri could certainly serve the same function in that system. But a bound Proxima — one that is, as Wertheimer and Laughlin believe, currently located near the apastron position of its orbit, could have useful effects on an infant system. As the paper notes:

If Proxima were bound to the system during its formation stages, then it may have gravitationally stirred the circumbinary planetesimal disk of the α Cen system, thereby increasing the delivery of volatile-rich material to the dry inner regions.

A significant factor indeed as we ponder the question of astrobiology around these stars. Laughlin has written elsewhere about the fact that Alpha Centauri planets will likely be dry because of the close orbit of Centauri A and B — the period of the AB binary pair is 79 years, and the stars make a close approach of 11.2 AU. Silicates and metals condense out of the protoplanetary disks around Centauri A and B, but to get water, we need to go further out, into the circumbinary disk surrounding both stars. A bound Proxima Centauri, then, becomes the mechanism for driving water-laden materials inward to any dry, terrestrial-class planets.

And there is another factor that makes the question of Proxima’s relation to Centauri A and B significant. If Proxima is bound, the implication is that all three stars were formed out of the same molecular cloud, and that would imply not just the same age but the same metallicity (metals being elements higher than hydrogen and helium). We know that both Centauri A and B are richer in metals than our own Sun, and if Proxima is likewise metal-rich, it may have an elevated chance of having planets. The link between gas-giant formation and metals has been well explored, though such a link for rocky worlds is not established.

What all this comes down to is that a gravitationally bound Proxima Centauri would exist as the third member of a system that should be rich in the materials needed to form terrestrial planets. The problem now is to find them using searches like the ongoing effort at La Silla, where the Pale Red Dot campaign will be in progress until April. As mentioned yesterday, you can follow the effort on Twitter: @Pale_red_dot, and use the hashtag #PaleRedDot. Conditions were problematic last night at the observatory but it looks like the first observations were made.