A New Filter for Life’s Survival

How do we make out the odds on our survival as a species? Philosopher Nick Bostrom (University of Oxford) ponders questions of human extinction in terms of a so-called Great Filter. It’s one that gives us a certain insight into the workings of the universe, in Bostrom’s view, because it seems to keep the galaxy from being positively filled with civilizations. Somewhere along the road between inert matter and transcendent intelligence would be a filter that screens out the vast majority of life-forms, keeping the population of the galaxy low, and offering us a way to gauge our own chances for survival.

Think of it this way. Perhaps the Great Filter has to do with the formation of life itself. If that is the case, then we have already made it through the filter and can go about exploring the universe. But if the Great Filter is in our future, then we can’t know exactly what it will be, and neither can we know whether we will survive it. Here the final term in Frank Drake’s equation comes to mind, the one specifying the lifespan of technological civilizations. Perhaps the Great Filter has to do with technology destroying itself. In that case, the filter could spell our doom. For more on Bostrom’s ideas, see Bostrom: From Extinction to Transcendence.

Through the Gaian Bottleneck

An ominous view, some would say, but along come Aditya Chopra and Charles Lineweaver (Australian National University), with a new paper suggesting a different kind of filter. The authors call it the Gaian Bottleneck, and it’s a filter that life on Earth has already passed through. The scenario is that life is fragile enough that it rarely develops into intelligence.

The reason: Young planetary environments are unstable. The life that does emerge needs to find ways to regulate greenhouse gases like water and carbon to keep surface temperatures in the habitable range. Normally we think of the decrease in the incoming bombardment of Solar System debris going back 4.5 billion years and extending to about 3.8 Gya as being a key to making the Earth more suitable for life, but the Gaian Bottleneck sees early life as being under strong selection pressure to modify and regulate its own environment. From the paper:

… bombardment rates inevitably decrease in the circumstellar habitable zones (CHZs) of stars, but the timescales for the evolution of Gaian regulation are probably unpredictable and would not inevitably evolve rapidly (or at all). Thus, if there is anything special about what happened on Earth to allow life to persist here, it might have less to do with the decreasing bombardment rate in the Hadean, or special chemical ingredients, or sources of free energy, or even a rare recipe for the emergence of life. The existence of life on Earth today might have more to do with the unusually rapid biological evolution of effective niche construction and Gaian regulation in the first billion years. Habitability and habitable zones would then not only be a passive abiotic property of stellar and planetary physics and chemistry (such as stellar luminosity, initial water content, and decreasing bombardment rate) but would also be a result of early life’s ability to influence initially abiotic geochemical cycles and turn them into the life-mediated biogeochemical cycles that we are familiar with on the current Earth…

In this view, we have gotten through the filter already, finding ourselves in a position not shared by planets around us. Conceivably, both Mars and Venus were once habitable, but a billion years after formation, Venus turns into the hell it is today and Mars goes into a deep freeze. Chopra and Lineweaver argue that if there was early microbial life on either world, it was unable to stabilize its environment, whereas on Earth, life played an active role in doing just that. 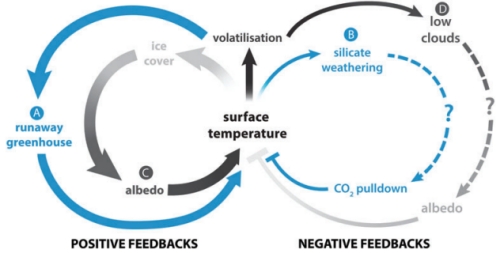 Image: Early Abiotic Feedbacks. During the first billion years after the formation of Earth (or of Earth-like planets), abiotic positive feedbacks (left) can lead to runaway surface temperatures outside the habitable range (both too hot and too cold). These positive feedbacks lead to the loss of liquid water [either from hydrogen escape to space or condensation into ice. Abiotic negative feedbacks (right) have been invoked to stabilize surface temperatures, but they may not be significant in the first billion years, hence the dashed lines and the question marks. As life evolves, it can strengthen or weaken these initially abiotic geochemical feedback loops and turn them into biogeochemical cycles and feedback loops. Evolving life can insert itself into these feedbacks at the points labeled A, B, C, and D. Credit: Aditya Chopra and Charles Lineweaver/ANU.

We can thus look without surprise on a galaxy where rocky terrestrial-class worlds are common even while life itself is not. Early extinction becomes a near universal phenomenon:

We argue that the habitable surface environments of rocky planets usually become uninhabitable due to abiotic runaway positive feedback mechanisms involving surface temperature, albedo, and the loss of atmospheric volatiles. Because of the strength, rapidity, and universality of abiotic positive feedbacks in the atmospheres of rocky planets in traditional CHZs, biotic negative feedback or Gaian regulation may be necessary to maintain habitability.

What, then, do we find on the planets of nearby stars? Not ancient ruins of advanced civilizations that have long ago destroyed themselves, but the fossilized remnants of extinct microbial life. No shattered remains of cities but long-gone remnants of simple life that failed in its mission to make its own planet a place where more complicated forms could develop. We would be living in a universe where almost all life is young, microbial, or extinct.

Chopra and Lineweaver run through a variety of ways their argument could be challenged. If Gaian regulation, for example, is a key to making a young planet into a place where life can survive, why should it necessarily be rare? Moreover, Gaian regulation is usually considered as starting in the Proterozoic, around 2.5 Gya. Invoking a pre-Proterozoic Gaia is even more controversial, to say the least. And the paper notes that abiotic negative feedback on the carbonate-silicate cycle could have stabilized surface temperatures on Earth without any recourse to Gaian regulation. Other potential objections are also weighed.

But knowing how many imponderables they are dealing with, the authors nonetheless suggest this sequence of events, which they consider ‘potentially universal,’ on young, wet planets:

First *0.5 Gyr: Hot, high bombardment, uninhabitable.
*0.5 to *1.0 Gyr: Cooler, reduced bombardment, continuous volatile loss.
*0.5 to *1.0 Gyr: Emergence of life in an environment with a tendency to evolve away from habitability.
*1.0 to *1.5 Gyr: Inability to maintain habitability, followed by extinction. As a rare alternative, this period would experience the rapid evolution of Gaian regulation and the maintenance of habitability, followed by the persistence of life for several billion more years.

The paper is Chopra and Lineweaver, “The Case for a Gaian Bottleneck: The Biology of Habitability,” Astrobiology 16(1) (January 2016), 7-22 (abstract).