A Telescope Eight Times the Diameter of Earth

If you’re looking for detailed imagery of a distant astronomical object, VLBI (Very Long Baseline Interferometry) can deliver the goods. As witness the image below, which the National Radio Astronomy Observatory (NRAO) is calling “the highest resolution astronomical image ever made.” Here we see radio emission from a jet of particles moving close to the speed of light. The particles are being accelerated by a supermassive black hole at the core of the galaxy BL Lacertae, a highly variable ‘active galaxy’ some 900 million light years from the Earth. 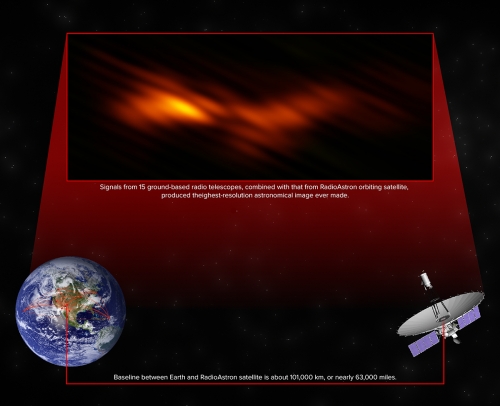 What fascinates me about this work is the technique. Very Long Baseline Interferometry works by collecting a signal at multiple radio telescopes, the distance between them being calculated from the different arrival times of the radio signal at the different installations. The calculations are made using a local atomic clock, with the data correlated with data from other antennae in the array to produce an image.

The upshot is that VLBI methods allow us to work with an emulated ‘telescope’ that has a size equal to the maximum separation between the constituent telescopes in the array. Conventional interferometry does much the same thing, but VLBI does not demand the physical coaxial cable or optical fiber connections of the former, allowing for greater distances between the telescopes.

RadioAstron provides the first true full-polarization capabilities for space VLBI observations on baselines longer than the Earth’s diameter, opening the possibility to achieve unprecedentedly high angular resolution in astronomical imaging. In this paper we present the first polarimetric space VLBI observations at 22 GHz, obtained as part of our RadioAstron KSP [Key Science Program] designed to probe the innermost regions of AGN and their magnetic fields in the vicinity of the central black hole. 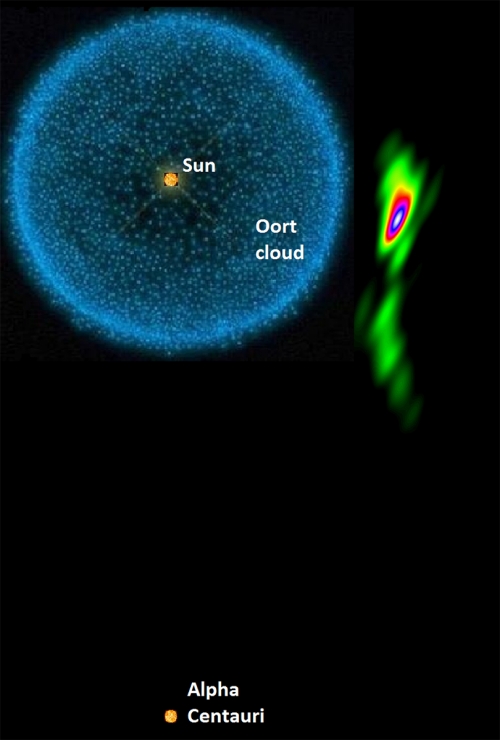 Above we see the jet from BL Lacertae fitted within a diagram of our local interstellar neighborhood. Notice that if we take the Oort Cloud as the outer perimeter of our Solar System, the jet just about fits within the system or, if we imagine one end of the jet at the outer edge of the Oort, the jet would extend almost to the Alpha Centauri stars. The detail we can see here is roughly equivalent to seeing a 50-cent coin on the Moon. The image elongation results from the greater resolving power in the direction of the satellite as compared to the ground telescopes, with resolution in the orthogonal direction being exaggerated to compensate for the effect.

As for BL Lacertae itself, it was originally thought to be a variable star within the Milky Way after its discovery in 1929, but was later identified as a bright radio source. Subsequent redshift measurements showed a recession velocity of 21,000 kilometers per second, implying a distance of 900 million light years. BL Lacertae is considered an AGN, or active galactic nucleus galaxy, the latter being a designation for a galaxy with a compact region at its center that has a much higher than normal luminosity over at least part of the electromagnetic spectrum.

The paper is Gómez et al., “Probing the innermost regions of AGN jets and their magnetic fields with RadioAstron. I. Imaging BL Lacertae at 21 microarcsecond resolution,” Astrophysical Journal Vol. 817, No. 2 (26 January 2016). Preprint available.

Next post: A New Look at the ‘Big Whack’