A New Look at Asteroid Distribution

We know that understanding Near-Earth Objects is vital not only for assessing future asteroid surveys and spacecraft missions, but also for tracking potential impactors on Earth. Projects like the Catalina Sky Survey and its now defunct southern hemisphere counterpart, the Siding Spring Survey, are all about asteroid and comet discovery, with a more specific goal of looking for objects posing a potential hazard to our planet. We lost the Siding Spring effort in 2013 due to funding problems, but the Catalina Sky Survey (CSS) is still in robust operation.

The survey draws data from a 1.5 meter telescope on the peak of Mt. Lemmon (Arizona) and a 68 centimeter instrument nearby at Mt. Bigelow. Now we have word that Mikael Granvik (University of Helsinki) and an international team of researchers have drawn on about 100,000 images acquired by the Catalina Sky Survey to study the properties of some 9000 NEOs detected in an eight-year period. The goal is to construct a model for the population of NEOs, giving us better insights into their origins and subsequent trajectories.

Most Near-Earth Objects are thought to originate in the main asteroid belt between the orbits of Mars and Jupiter. An individual asteroid’s orbit can vary over time as heat from the Sun is released from its uneven surface, an effect named after the Russian engineer Ivan Osipovich Yarkovsky, who noted that even this tiny force could have cumulative effects on an asteroid’s orbit. The Estonian astronomer Ernst J. Öpik would subsequently bring the effect to the attention of the larger astronomical community after its initial publication by Yarkovsky.

Asteroid orbits can eventually be affected by the gas giants Jupiter and Saturn, changing their trajectory to push them into the inner system. From this we get our population of NEOs, so classified, according to this University of Hawaii at Manoa news release, when their smallest distance from the Sun during an orbit is less than 1.3 times the average Earth-Sun distance. 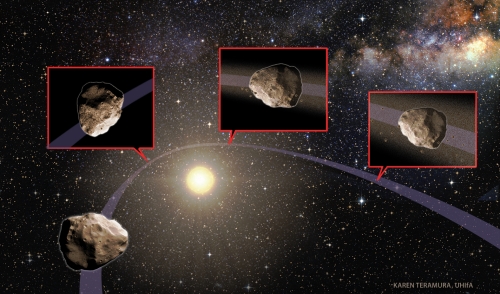 Image: Artist’s impression. An asteroid’s orbit is altered as it passes close to Jupiter, Earth or Venus, such that its new orbit takes it near the Sun. The intense heat from the Sun causes the asteroid’s surface to expand and fracture, and some of the material breaks off. As the surface material disintegrates, it creates dust and pebbles that spread out along the asteroid’s orbit with time. If the orbit of the dust and pebbles ever intersects Earth, it can create a meteor shower. Credit: Karen Teramura, UH IfA.

Most NEOs have been thought to eventually end their lives by plunging into the Sun, but now we learn that they may not make it that far. Using calculations developed by Robert Jedicke (University of Hawaii), the Near-Earth Object population modeling project was able to compute the probabilities that asteroids on different orbits would have been detected by the Catalina Sky Survey. Using CSS data and theoretical orbit distributions of NEOs originating in different parts of the main belt, they developed a more detailed model of the NEO population than any previously available.

The model, however, predicted almost ten times more objects on orbits that approach the Sun within ten Solar diameters than have been observed. Eliminating these asteroids could be accomplished by assuming that a large number of NEOs are destroyed as they move closer to the Sun. The asteroids do not fall into the Sun but are broken up as they approach. Darker asteroids are destroyed further from the Sun than brighter ones, implying a different internal structure and composition. Granvik sees this latter as the most significant result of the research:

“Perhaps the most intriguing outcome of this study is that it is now possible to test models of asteroid interiors simply by keeping track of their orbits and sizes. This is truly remarkable and was completely unexpected when we first started constructing the new NEO model.”

The work also helps to explain meteor streams that should follow in the path of the asteroids or comets from which they are dislodged, and yet most meteor streams have not been matched with known objects. The Granvik study concludes that the parent bodies of these meteor streams were destroyed when they approached too close to the Sun.