Yesterday’s post on the distribution of asteroid populations inevitably had me thinking about the Chelyabinsk event on February 15, 2013, and about the concurrent flyby of the asteroid (367943) Duende, which took place on the same day. A scant sixteen hours after the explosion of the Chelyabinsk bolide and the fall of five tons of meteoritic material to the ground in Siberia, (367943) Duende passed by at about 27,700 kilometers above the surface of the Earth.

We talked yesterday about learning more about asteroid distributions, so we could understand where they come from and what to expect as we assess their trajectories. In the case of Chelyabinsk, it was originally thought that both events were related, with the Chelyabinsk impactor associated with (367943) Duende in the form of a companion object, or perhaps as material that broke away from the parent asteroid. But an analysis of the orbits of both objects as well as spectroscopic analysis of Duende and the Chelyabinsk material says otherwise.

We’re fortunate with Chelyabinsk in having so much data on the object. As this story in Sinc: La ciencia es noticia points out, dashcams are quite popular in Russia, and it is thanks to many of these — along with traffic cameras, security cameras and other sources — that we have a catalog of 960 video recordings. There were many witnesses making manual recordings, and we likewise have plenty of written accounts from those startled by the spectacular event.

All of this has led to calculations of the atmospheric entry trajectory of the object that exploded some 20 kilometers over Siberia, releasing approximately 500 kilotons of energy. The resulting shockwave damaged property out to a distance of 120 kilometers and caused 1491 injuries. At the bottom of Lake Chebarkul divers were able to recover a 650 kg meteorite. So we have plentiful data, allowing researchers to work out different orbital solutions for the parent asteroid. 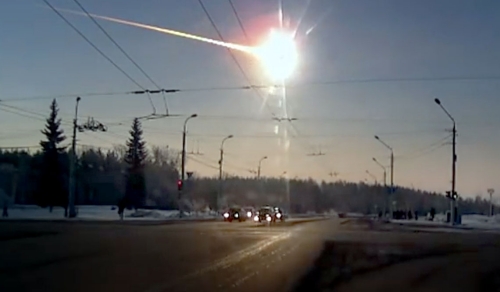 Image: The Chelyabinsk event as recorded by dashcam north of the city.

Sinc focuses on the work of Carlos and Raúl de la Fuente Marcos who, with Sverre J. Aarseth (University of Cambridge) have searched for the parent body of the Chelyabinsk superbolide. Their work, reported in The Astrophysical Journal finds that the asteroid 2011 EO40 is a dynamically related object, with the Chelyabinsk impactor’s orbit altered because of a close encounter with the Earth in 1982. A trajectory that had paralleled that of 2011 EO40 was transformed into an Earth-crossing path that would strike our planet decades later.

Complicating the analysis is the complexity of the gravitational resonances near the Earth that can cause asteroids of highly different origins to fall into orbits that are relatively similar. The de la Fuente Marcos brothers pursued the investigation in a recent issue of Monthly Notices of the Royal Astronomical Society, where a grouping called 5011 Ptah (named after the only named asteroid in the grouping) is considered as a possible source for Chelyabinsk. From the paper (H stands for absolute magnitude):

These are groupings of asteroids that move in similar orbits. They are dynamically but not physically related:

… we have shown statistically that the distribution of the NEO population in orbital parameter space is far from random. We have confirmed the presence of statistically significant dynamical groupings among the NEO population… Some of these dynamical groupings appear to have been the immediate sources of recent asteroid impact events and are likely to continue doing so in the future. The groupings host both relatively large (size between 200 m and 700 m) and very small (a few metres) objects which suggest that some of the smaller fragments may have been produced in situ via rotational instability or other mechanisms… Production of meteoroids within the immediate neighbourhood of the Earth has a direct impact on the evaluation of the overall asteroid impact hazard… However and although this is of considerable theoretical interest, most of these fragments are small enough to be of less concern in practice.

So while we can’t yet pinpoint the origin of the Chelyabinsk impactor, we’re making progress in understanding the various groupings that Near-Earth Objects can fall into. All of this can help us place events like 2008 TC3 in Sudan or 2014 AA in the Atlantic Ocean in context. According to this work, both of these asteroids, which caused no significant damage or injury, belong to the groups the de la Fuente Marcos brothers have analyzed. Studies like these and the ongoing work of projects like the Catalina Sky Survey give us a better sense of the odds of impact and help us prepare in case larger asteroids are found on dangerous trajectories.