Have we finally traced a Fast Radio Burst to its place of origin? News from the CSIRO (Commonwealth Scientific and Industrial Research Organisation) radio telescopes in eastern Australia, along with confirming data from the Japanese Subaru instrument in Hawaii, suggests the answer is yes. Fast Radio Bursts (FRBs) are transient radio pulses that last scant milliseconds. In that amount of time, they have been known to emit as much energy as the Sun emits in 10,000 years. And exactly what causes FRBs is still a mystery.

Take the so-called ‘Lorimer Burst’ ( FRB 010724) which was discovered in archival data from 2001 at the Parkes radio telescope in New South Wales. Here we’re dealing with a 30-jansky dispersed burst that was less than 5 milliseconds in duration. Although the burst appeared roughly in the direction of the Small Magellanic Cloud, the FRB is not thought to be associated with our galaxy at all. A 2015 event, FRB 110523, was discovered in data from the Green Bank dish in West Virginia, with an origin thought to be as much as six billion light years away.

Sixteen FRBs have been detected, but according to this news release from the Max Planck Institute for Radio Astronomy, researchers believe they are a much more common phenomenon. A new paper in Nature now tells us that the Parkes telescope detected a new Fast Radio Burst (FRB 150418)) on April 18, 2015. But in this case, we have a twist. Evan Keane (Square Kilometre Array Organisation, Jodrell Bank UK) and an international team have been developing a system to detect FRBs within seconds, which makes it possible to alert other telescopes to pinpoint the source. 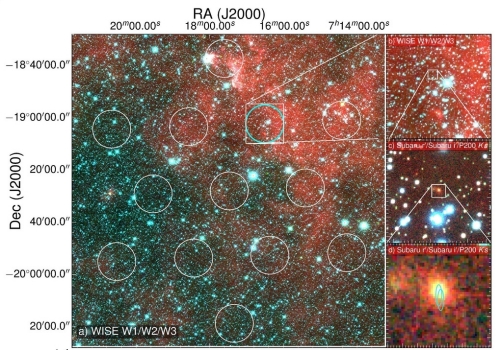 Image: The infrared image on the left shows the field of view of the Parkes radio telescope with the area where the signal came from marked in cyan. On the right are successive zoom-ins on that area. At the bottom right is the Subaru optical image of the FRB galaxy, with the superimposed elliptical regions showing the location of the fading 6-day afterglow seen with ATCA. Credit: © D. Kaplan (UWM), E. F. Keane (SKAO).

The system, part of the Survey for Pulsars and Extragalactic Radio Bursts (SUPERB), allows quick detection and transmission of the relevant information to other telescopes. Using it, within two hours of the Parkes detection the Australia Telescope Compact Array (ATCA) 400 kilometers to the north was able to trace the FRB to a radio source that lasted six days before finally fading out. What the Subaru telescope adds to the mix was that it found a galaxy at optical wavelengths that matches up with the radio source detected by the Compact Array. Unlike the previous sixteen detected bursts, we now have a far more precise fix on a location.

The culprit turns out to be an elliptical galaxy with a redshift consistent with a distance of six billion light years. This marks the first time a host galaxy has been determined for an FRB, and the first time an FRB’s distance has been measured. Simon Johnston (Head of Astrophysics at CSIRO) notes that the galaxy in question is well past its prime period for star formation, an unexpected result. Johnston speculates that the cause of the FRB may be two neutron stars colliding rather than any process associated with the birth of young stars.

Whatever causes them, Fast Radio Bursts turn out to be useful in interesting ways. They show a frequency-dependent dispersion, which means the radio signal is affected by the amount of material it has moved through. An FRB thus makes it possible to conduct a cosmological measurement. Says Johnston:

“Until now, the dispersion measure is all we had. By also having a distance we can now measure how dense the material is between the point of origin and Earth, and compare that with the current model of the distribution of matter in the universe. Essentially this lets us weigh the universe, or at least the normal matter it contains.”

The result: A universe made up of 70 percent dark energy, 25 percent dark matter and 5 percent ordinary matter is a good fit for the measurement conducted on the FRB pulse. What’s intriguing here is the prospect that we are moving into an era of FRB astronomy. As we detect more and more of these events, we may find new ways to investigate cosmological questions. 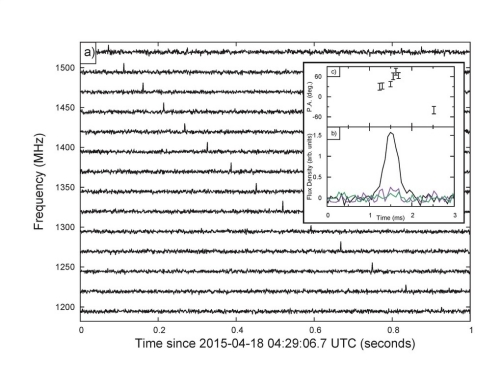 Image: This image shows the increased delay in the arrival time of the Fast Radio Burst as a function of the frequency. The delay in the signal is caused by the material it goes through between its point of origin in a distance of 6 billion light years and Earth. Credit: © E. F. Keane (SKAO).

To be sure, we still don’t know what causes FRBs. But as Johnston points out, the Australian SKA Pathfinder (ASKAP) is going to be able to start looking for FRBs later this year. ASKAP is a next-generation radio telescope made up of 36 identical 12-meter antennas that will work together as an interferometer. The fully implemented Square Kilometre Array is likewise expected to detect numerous FRBs and pinpoint their locations. We should soon have abundant data to pursue questions of FRB origin and the cosmological issues the bursts can illuminate.