When I first got interested in SETI, I naively assumed that we would get a detection fairly soon, and that we would detect not a directed beacon but simple background traffic in a remote civilization. I had no idea at the time how difficult it would be to pick up the kind of radio traffic we routinely generate on Earth from a distant star, and as a matter of fact, my interest in shortwave radio led me to assume that, just as I enjoyed the sport of DX — listening for distant signals — so SETI would simply be an offshoot of this, with a harder-to-get QSL card.

Some time in the mid-1980s I wrote a piece called “Where the Real DX Is” for Glenn Hauser’s Review of International Broadcasting, running through a list of the nearest stars and talking about SETI projects that had been tried up to then. I haven’t gone back to read that article in years and would probably find it an embarrassing chore. But it’s interesting to me that the idea of leakage radiation does have its place, particularly in the area of beamed power.

What I knew little of back in the 80’s was how beamed power — using high-power microwave beams but including millimeter-wave beams and lasers — might empower a space-based infrastructure. While television and radio signals are all but undetectable from another star (at least, for a civilization at our level of development), intense, focused beams to impart power to a spacecraft present a better target. The interesting question that James Benford (Microwave Sciences) and son Dominic (NASA GSFC) ask in the paper we began looking at yesterday is just how detectable power beaming would be. 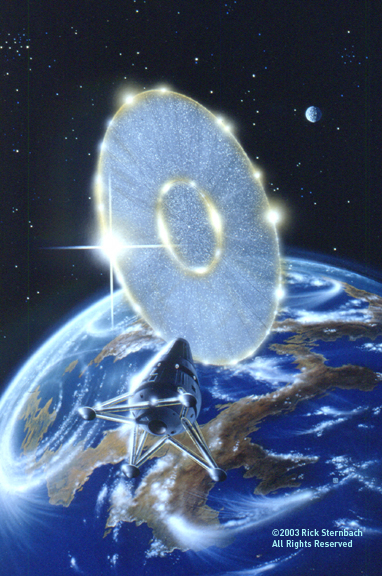 This takes off on ideas Jim Benford discussed last year in these pages (see Seeing Alien Power Beaming), and both Jim and Dominic recently looked at the question in relation to SETI efforts on a very intriguing star indeed in Quantifying KIC 8462852 Power Beaming. After all, if a distant civilization were building something like a Dyson sphere or ‘swarm’ around a star, it would have to have constructed an infrastructure that might well involve power beaming technologies.

Image: A favorite image from a favorite artist, Rick Sternbach. Here we’re looking at an interstellar lightsail near an exotic world. The uses of beamed power in near and deep space are numerous, and many of them appear to be detectable from a SETI perspective. The image comes from a 1983 issue of Science Digest. Credit: Copyright Rick Sternbach.

The Benford paper runs through a number of beaming concepts ranging from orbit raising, a lower power application, to actual launch to orbit using microwave thermal thrusters. Various high-power beaming applications have been quantified for missions within the Solar System as well, using microwave or laser beams to boost craft to 100 to 200 kilometers per second. A mature infrastructure might involve high-speed unmanned supply craft being decelerated upon arrival by a beam system similar to the one that launched it. I mentioned yesterday that beaming from a solar power station in space to a planetary surface is not a likely observable. Here’s why, whether we’re talking about microwave bands or lasers in the optical range:

The beam must be carefully controlled to deliver power to the receiving rectifying antennas on the ground (Mankins 2014). Any side emissions are economic losses, therefore substantial measures would be taken to reduce side lobes to a minimum. Further, the first several sidelobes are absorbed in the ground. The remaining side lobes are dispersed in angle so that the power density in the far field will be very low. For the worked example in Mankins (Mankins 2014; Dickinson 2016), the back lobe is down 40 dB relative to the ∼ 1GW main beam.

This is in contrast to power beaming transportation applications, in which the varying solid angle of the receiving spacecraft results in the main beam increasingly leaking around the edges of the vehicle being accelerated.

So that takes detection of one of the numerous power beaming scenarios off the table, but many others survive scrutiny. Have a look at this table from the paper, which draws on representative parameters for applications of power beaming presented earlier in the discussion.

Here we’re looking at observables in terms of slew rate (movement of the beam), the EIRP and the observation time. EIRP stands for Effective Isotropic Radiated Power, the measured radiated power in a single direction — it’s the product of the antenna gain times the power radiated. For useful background, the standard text is Jim Benford’s own High Power Microwaves (now in its third edition, CRC Press, 2016). A quick note on EIRP from the paper:

Spectral flux density, typically denoted in Janskys, is the power density divided by the bandwidth. While this is commonly used as the observed quantity in radio astronomy, we cannot know the bandwidth of an ETI transmitter. Consequently, in thinking about ETI power beaming mission [sic] we must deal with EIRP, not spectral flux density. Beaming power does not require or even necessarily benefit from narrow bandwidth; energy transference is what matters.

The possibilities are numerous, and not all of them designed for deep space. Microwave thermal thrusters, for example, can be fed by a high-power microwave beam in a single-stage rocket with a flat aeroshell on the underside covered by microwave-absorbing heat exchangers. The system is efficient because the energy source remains on the ground — see the paper for further parameters on this as well as orbit raising, where ground-based energy sources lift a satellite to a higher orbit. As the table shows, orbit raising is significantly lower in power than launch from the surface.

But of course beaming applications deeper into the system are a part of a robust infrastructure based on beaming, and here we can look at interplanetary transfers by beam-driven sails, as well as starship concepts involving prolonged acceleration of an interstellar vehicle, like the Robert Forward concepts I mentioned yesterday. Given the power requirements for starships, such beams would be detectable with our current technology, but this would also require that the Earth fall within the bandwidth of the power beam.

These questions of detectability depend, of course, upon the level of technology of the civilization trying to make the detection. In our case, we have the interesting story of the star KIC 8462852 to give us some guidance. We have radio observations of this curious star that found no signs of power beaming in about 180 hours of observations. The idea was to look for incidental radiated power — leakage radiation — produced by an advanced civilization. The observations were made using the Allen Telescope Array in the 1-10 GHz range.

Refer back to the table above and the beaming applications there. These are the authors’ conclusions re the KIC 8462852 observations using the Allen Telescope Array:

We also learn that the limited observation times and wavelength coverage mean that we have no firm conclusions about the star. More systematic studies, which would include observations at higher radio frequencies, would be called for to come up with a stronger result. I should also mention that an optical SETI attempt was made on KIC 8462852 at the Boquete Optical SETI Observatory in Panama. Given the detection limits of the equipment there and other issues discussed in the paper, none of the power beaming applications in consideration by the Benfords could have been detected at the Boquete site.

*As discussed above, the beaming power levels are high and transient and easily dwarf any ETI civilization’s diffuse leakage to space (Sullivan 1978). Power beaming described here is larger than that necessary for beaming systems for communication: EIRP = 1018 W for a 1,000ly-range beacon (Benford, Benford & Benford 2010). SETI programs could explore a different part of parameter space by observations suitable to finding leakage from power beams.

We have no way of knowing whether any civilization exists outside of our own, nor can we know if such a civilization would use power beaming. But the virtues of beamed power for fast transportation within our own Solar System — and for lowering the cost to orbit, as well as raising orbits — give us good reason to continue to explore the use of this technology. In doing so, we should keep in mind that we are producing an observable signal that is well beyond those undetectable “I Love Lucy” episodes that are now 65 light years out. I think the Benfords are right when they argue that detectable radiation is a message in itself, whether or not we ever decide to impose a structured message into the beams that power a future infrastructure.

The paper is Benford & Benford, “Power Beaming Leakage Radiation as a SETI Observable,” submitted to The Astrophysical Journal and available as a preprint.