False Positives in the Search for Extraterrestrial Life

I’m still smarting about having to cancel my travel plans for the Tennessee Valley Interstellar Workshop in Chattanooga, particularly since the Tau Zero Foundation was one of the sponsors of the event. But fortunately, I do have people offering to write up the workshop for Centauri Dreams, so we’ll have some coverage and photos soon. Onward…

We only have two years before the James Webb Space Telescope is scheduled to launch. Assuming all goes well, JWST should help ease us into the era of biosignature detection, as we look for the characteristic signs of living organisms in the atmospheres of their worlds. But just how definitive are such signatures? A new paper from the University of Washington digs into potential false positives and offers specifics on the signatures that could fool us.

One way to study biosignatures is by transit spectroscopy, using data gathered from starlight as it passes through a planet’s atmosphere during a transit. This allows us to analyze the features of light that flag particular atmospheric constituents. Would a strong oxygen signature necessarily indicate life? You would think so, because the oxygen in Earth’s atmosphere, O2, is unstable over geological timeframes and would gradually be depleted through reactions with volcanic gases and oxidation at the surface.

On our planet, then, oxygen needs a replenishing source, which is provided through photosynthesis as plants and algae tap sunlight for energy. But Edward Schwieterman and team argue that while abiotic oxygen will not build up to significant levels on Earth, it can certainly arise in a number of different planetary settings. That fact should give us pause.

Working under the aegis of the university’s Virtual Planet Laboratory, Schwieterman sees oxygen as a potential ‘biosignature impostor.’ The abiotic creation of oxygen, particularly around the kind of low mass stars that are likely to be our first targets for this kind of work, can happen when ultraviolet light from the star splits carbon dioxide molecules, allowing some of the oxygen atoms to form O2. We get oxygen without any requirement for biology to sustain it. 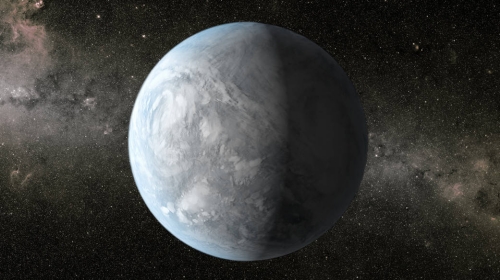 Image: New research from the University of Washington-based Virtual Planetary Laboratory will help astronomers better identify and rule out “false positives” in the ongoing search for life. Shown is an artist’s rendering of Kepler 62E, about 1,200 light-years away in the constellation Lyra. Credit: NASA

Usefully, Schwieterman’s computer models show that this process will also produce detectable amounts of carbon monoxide. Thus the presence of carbon dioxide and carbon monoxide would raise doubts about the simultaneous detection of oxygen in that planetary atmosphere. Abiotic processes rather than life might well be the agent. We can use this to our advantage:

…in the cases presented here, the spectral discriminators against abiotic O2/O3 are more detectable with a hypothetical JWST observation than the O2 or O3 signatures themselves. In our example spectra, neither O2 nor O3 would be directly detectable with just 10 transits, but the abiotic discriminators CO/CO2 and O4 could be. This provides an opportunity to maximize the utility of observing time if the ultimate goal is to characterize planets where true biosignatures are obtainable. If spectral indicators for biosignature impostors are detected with reasonable confidence, the community may wish to reallocate the remaining time to other promising targets, rather than integrate further.

The mention of O4 above is a reference to a second kind of biosignature impostor, where light from the primary star breaks down atmospheric water on the rocky planet under investigation. In this case, we get large amounts of oxygen as the hydrogen escapes, and might expect to find short-lived pairs of oxygen molecules that become O4 molecules, producing a distinctive signature of their own. A higher percentage of oxygen is produced than Earth has ever had in its atmosphere, as Schwieterman notes:

“Certain O4 features are potentially detectable in transit spectroscopy, and many more could be seen in reflected light. Seeing a large O4 signature could tip you off that this atmosphere has far too much oxygen to be biologically produced.”

This simple test case demonstrates that if the high-O2 atmospheres proposed by Luger & Barnes (2015) exist, the O4 absorption band strength in those planetary spectra would rival or exceed that of the monomer O2 bands. These spectra are qualitatively different than modern-Earth’s spectrum, even in the 0.3-1.0 µm range, with a different shape, broader O2 features, and additional features from O4. These are all signs of a much higher O2 abundance than the Earth’s atmosphere – self-regulated by negative feedbacks – has ever achieved.

Schwieterman and team believe the first potentially habitable planets whose atmospheres we study will be orbiting M-class dwarf stars, the kind of planets most likely to show both kinds of biosignature impostors discussed above. Thus we’ll be faced with the need to interpret potential biosignatures that could be confusing without these criteria. Says Schwieterman:

“The potential discovery of life beyond our solar system is of such a huge magnitude and consequence, we really need to be sure we’ve got it right — that when we interpret the light from these exoplanets we know exactly what we’re looking for, and what could fool us.”

Next post: A New Kind of ‘Fast Radio Burst’