A new paper in Nature offers further information about Fast Radio Bursts (FRBs), which we last looked at only a few days back. The February 24 post examined work on FRBs that were consistent with what has been seen before — transient pulses lasting mere milliseconds, while emitting huge amounts of energy (see Fast Radio Bursts: First Distance Measurement). Now we have further work out of the Max Planck Institute for Radio Astronomy (MPIfR) in Germany that describes the detection of the first source of repeating bursts, an object outside our own galaxy that is producing multiple short bursts.

Lead author Laura Spitler (MPIfR) explains that a McGill University graduate student named Paul Scholz, using data from the Arecibo radio telescope in Puerto Rico, discovered the repeat signals last November. Scholz found a total of 10 new bursts. “Not only does this source repeat, but the brightness and spectra of the bursts also differs from those of other FRBs,” adds Spitler. We may be looking at a new class of FRB, one perhaps drawing on extremely powerful flare activity in a rotating neutron star. 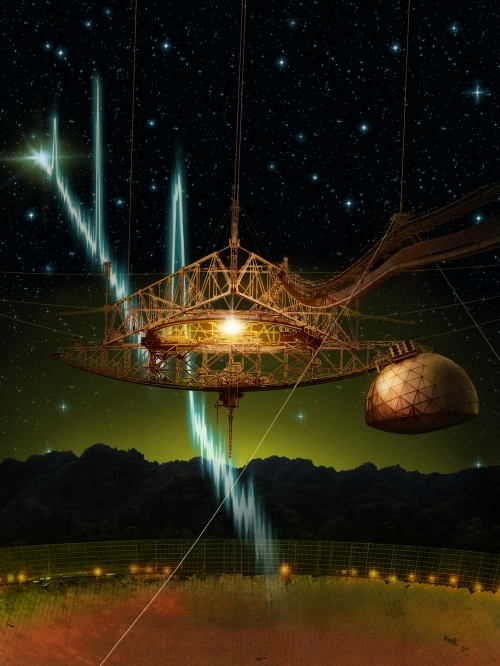 Image: The 305-m Arecibo telescope and its suspended support platform of radio receivers is shown amid a starry night in this artist’s impression. From space, a sequence of millisecond-duration radio flashes are racing towards the dish, where they will be reflected and detected by the radio receivers. Such radio signals are called Fast Radio Bursts, and Arecibo is the first telescope to see repeat bursts from the same source. Credit: Danielle Futselaar.

This MPIfR news release also points to an upcoming paper in Monthly Notices of the Royal Astronomical Society, which reports on a repeating FRB signature found by the Parkes radio telescope in Australia. Although not yet published, the preprint of this work is available, from which this:

Among the new FRBs is the largest excess DM [dispersion measure, the integrated free electron density along the line of sight] to date giving a redshift limit of <1.3. For the first time structure has been seen in the profile of FRBs with a two-component detection. This poses significant challenges to many of the models of FRB emission which rely on one-off high energy events. However the Cordes & Wasserman (2015) model of “supergiant” pulses and the Popov & Postnov (2007) model of hyperflares could both account for this structure. The rates expected by these models is highly uncertain and cannot at present be used as a discriminator.

A word on the term ‘dispersion measure,’ as found above. It is possible to distinguish a pulse from man-made interference because electrons in the interstellar medium cause radio waves to travel more slowly at lower radio frequencies. You’ll note above that the dispersion measure in the new observations is said to be the largest to date. All ten of the newly discovered bursts have a far higher dispersion measure than would be found in a source within our galaxy.

So now we have a bit of a conundrum. The work discussed here on the 24th was also produced by researchers at the Max Planck Institute for Radio Astronomy and likewise published in Nature. It focused on FRBs as cataclysmic events like gamma-ray bursts, which would not generate repeat occurrences. Now we are talking about a repeating FRB that results from an extragalactic neutron star. The implication: There are multiple ways to produce an FRB.

The plan going forward is to use interferometry to study the origins of these radio bursts. Jason Hessels (University of Amsterdam), a corresponding author on the Nature paper, notes the possibilities:

“Once we have precisely localized the repeater’s position on the sky, we will be able to compare observations from optical and X-ray telescopes and see if there is a galaxy there. Finding the host galaxy of this source is critical to understanding its properties.”

I may have the exact number wrong and probably do, but at best the number of FRBs thus far detected is still tiny — I make out 32 events so far. At any rate, each new event has the potential for revising our understanding of these unusual phenomena.

Previous post: False Positives in the Search for Extraterrestrial Life