New Eyes on the Kuiper Belt

You probably recall how tricky it was to find 2014 MU69, the small Kuiper Belt Object that will be the next destination for our New Horizons probe. The actual extended mission to 2014 MU69 awaits a summer 2016 review within NASA, but because trajectory changes to get there could not be delayed, the New Horizons craft performed four maneuvers late last year to set the course. The search for a suitable KBO began in 2011 and it was not until 2014, working with data from the Hubble Space Telescope, that scientists were able to find their best candidate.

Now consider that 2014 MU69 has a diameter of about 45 kilometers, making it ten times larger than the average comet. How difficult, then, to assess the true population of smaller Kuiper Belt Objects. We’d like to know a lot more about much smaller KBOs, because assessing the abundance and collisional processes of these objects is way of understanding the debris disks we’re seeing around other stars. Current theory suggests that KBOs below about 10 kilometers in radius are readily broken up, but we haven’t been able to test the idea with observations because objects this small are too faint to be in detected in reflected light.

Now we have an improved way of looking. CHIMERA (the Caltech HIgh-speed Multi-color camERA) works by studying occultations, monitoring thousands of stars simultaneously to see if a KBO of any size moves in front of them for a fraction of a second. All of this calls for a fast camera, but this wide-field telescope system seems up to the job. Leon Harding is CHIMERA instrument scientist at the Jet Propulsion Laboratory, and lead author of the paper on this work:

“Each of CHIMERA’s cameras will be taking 40 frames per second, allowing us to measure the distinct diffraction pattern in the wavelengths of light to which they are sensitive. This high-speed imaging technique will enable us to find new Kuiper Belt objects far less massive in size than any other ground-based survey to date.”

Scientists working with CHIMERA, which is now installed on the Hale telescope at Palomar, believe that the first 100 hours of data from the instrument should produce dozens of small KBOs. Usefully, the instrument is also effective for detecting near-Earth asteroids down to 10 meters in size. In fact, its wide-field imaging techniques can be applied to everything from nearby debris in space to distant eclipsing binary star systems, pulsing white dwarfs, aurorae on brown dwarfs and transiting planets. Adds Harding: “Not only can we image over a wide field, but in other modes we can also image objects rotating hundreds of times per second.”

As witness the image below, showing the Crab Pulsar as seen by CHIMERA. Spinning at 32 times per second, the pulsar is a young neutron star that is the remnant of the supernova observed on Earth in the year 1054, and is one of the few pulsars that can be observed optically. CHIMERA focused on the pulsar for a 300-second exposure, imaging the entire field of view at a rate of 40 frames per second. The result speaks for itself. 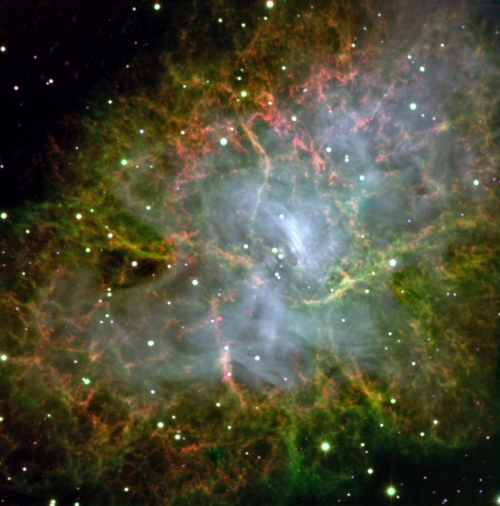 Image: This image of the Crab Pulsar was taken with CHIMERA, an instrument on the Hale telescope at the Palomar Observatory, which is operated by the California Institute of Technology. This pulsar is the end result of a star whose mass collapsed at the end of its life. It weighs as much as our sun, but spins 32 times per second. The instrument focused on the pulsar for a 300-second exposure to produce a color image. CHIMERA zoomed in on the pulsar and imaged it very fast, then imaged the rest of the scene slowly to create this image. Credit: NASA/JPL-Caltech.

But as the first paper on CHIMERA, published in Monthly Notices of the Royal Astronomical Society notes, the instrument was conceived and designed to search for KBOs, given the fact that 31,500 star hours of archival data from the Hubble Space Telescope produced so few discoveries. Ground-based surveys with the right equipment should ramp up those numbers.Commissioned in July of 2014, CHIMERA is now at work on Kuiper Belt detections. A substantial upgrade extending its capabilities is already in the works. 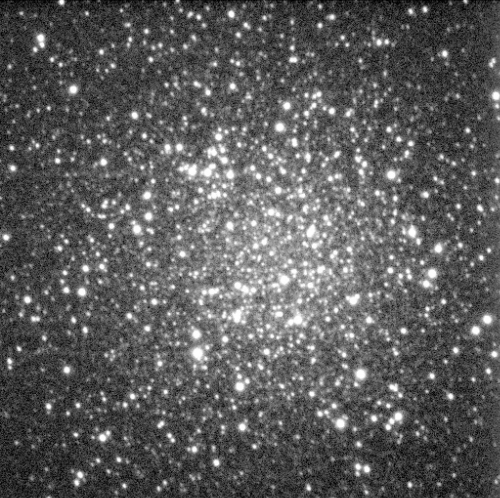 Image: The globular cluster M22, located in the constellation Sagittarius, was imaged by the CHIMERA instrument. The team will observe M22 and other star fields to look for signs of Kuiper Belt objects. Credit: NASA/JPL-Caltech.

The paper is Harding et al., “CHIMERA: a wide-field, multi-colour, high-speed photometer at the prime focus of the Hale telescope,” published online by Monthly Notices of the Royal Astronomical Society 2 March 2016 (full text). A JPL news release is also available.