SETI: Knowing Where to Look

Running a site like Centauri Dreams means adapting and reconfiguring on a daily basis. The best laid plans and all that… When I wrote recently about the SETI efforts at KIC 8462852, my plan had been to follow up that discussion with a broader SETI issue — where is the best place in the sky to search for a SETI signal? Then life intervened, first with my preparations to go to the Tennessee Valley Interstellar Workshop in Chattanooga, and then with the illness that cancelled those plans and left me with a thoroughly disrupted train of thought.

I’m now ready to tackle that SETI question with particular reference to a new paper by René Heller and Ralph E. Pudritz, but I still want to put the discussion into context. With the KIC 8462852 SETI effort, we looked at a targeted observation campaign using the Allen Telescope Array to see if researchers could find any evidence of unusual activity associated with the star. As we saw in Jim and Dominic Benford’s recent work (see Power Beaming Parameters & SETI re KIC 8462852), no evidence of microwave beaming could be found in the brief observational window, although our equipment would be capable of detecting many forms of it.

The unusual light curves in our Kepler data made KIC 8462852 a high-profile target. What the ATA search was looking for was ‘leakage’ radiation, associated with the activities of a technological civilization but not intended as deliberate attempts to communicate with anyone else. And the fact that we found nothing shouldn’t be taken too far in any particular direction. A thorough study of KIC 8462852 in a more systematic manner and at other frequencies would be called for if we wanted to investigate the star in depth and had the resources to do it long-term.

But what about this matter of leakage’ radiation? It’s an intriguing fact that there have been receptions of signals of a one-off nature (the Wow! signal is one) that could conceivably be the result of a beam sweeping past us from a distant system. Or, at least, consistent with it — these are pulsed, intermittent signals that were reported, for example, in a 1997 survey of the Milky Way’s center (citation below). We also have sources like GCRT J1745-3009, a transient bursting radio source that fails our expectations for flare stars, binary pulsars and much else. 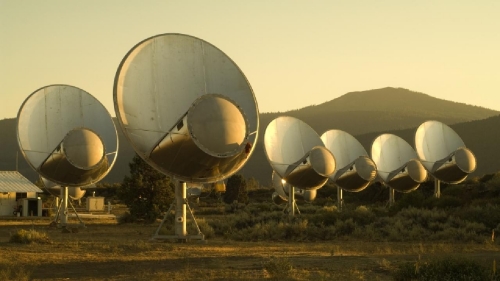 SETI got started in the experimental way with Frank Drake’s work at Green Bank in 1960, targeting the close stars Tau Ceti and Epsilon Eridani. Here the intention was to listen out for a directed signal, a ‘hello’ announcement from another star system, and for one brief, unforgettable moment, Drake thought he had found one (the signal, we now know, was local). Given the nature of such directed beaming, this would theoretically be a much easier signal to detect, as it would stay fixed upon us and would be at sufficient power levels that, unlike our own radio and television broadcasts, it would survive the long interstellar journey.

Most of the SETI searches since — there have been more than 100! — have looked at nearby systems or in some cases stellar clusters. The SETI Institute’s Project Phoenix worked at different sites between 1995 and 2004 and, according to Heller and Pudritz (both at McMaster University, Ontario) covered more than 800 stars as distant as 240 light years. We’ve done targeted searches of the galactic center and highly focused looks at specific stars like Gl 581, and in 2015 we looked for laser emissions from more than a thousand Kepler Objects of Interest. And let’s not forget the SETI@Home project that draws on Arecibo data.

We have yet to find directed beacons or leakage radiation unless some of the signals discussed above happen to be instances of one or the other — the eponymous ‘Benford beacon’ would actually sweep past us as a transient which we couldn’t identify without further observations.

In terms of sheer numbers, we would expect leakage signals would be the most abundant, because they would be generated by many technological civilizations and not just those intent on communicating with us. In any case, where to look seems clear. Looking toward regions of sky with higher stellar densities makes abundant sense. If ETI is out there, we would expect to see more signal activity where there are more worlds that might be habitable. 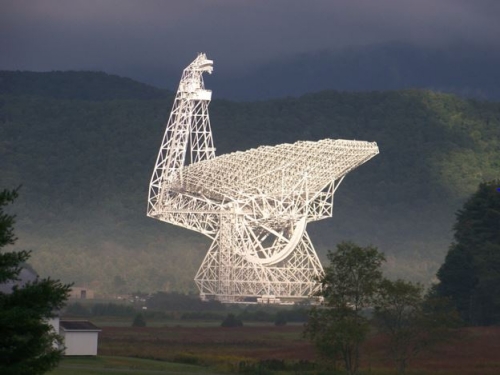 Toward the Galactic Center

Thus the galactic center search strategy laid out by Gregory, Dominic and Jim Benford in an older paper, 2010’s “Searching for Cost Optimized Interstellar Beacons,” which calls for a search in the plane of the spiral disk because 90 percent of the galaxy’s stars are within 9% of the sky in the plane and hub of the galaxy. From the analysis:

Whatever forms might dwell further in from us toward the center, they must know the basic symmetry of the spiral. This suggests the natural corridor for communication is along the spiral’s radius from Galactic Center or toward it, a simple direction known to everyone. (A radius is better than aiming along a spiral arm, since the arm curves away from any straight-line view of view. On the other hand, along our nearby spiral arms the stars are roughly the age of ours.) This avenue maximizes the number of stars within a telescope’s view, especially by staring at the galactic hub. Thus, a Beacon near the center should at least broadcast outward in both directions, while societies at the far reaches may save half their cost by not emitting outward, since there is much less chance of advanced societies there.

But we’re not through yet. In fact, we’re just beginning, as this paper goes on to explain. In 2004, Robert A. Rohde & Richard A. Muller (UC-Berkeley) suggested a 62 million-year cycle followed by marine life on Earth, a suggestion developed by subsequent researchers to suggest that the movement of our Sun vertically above and below the galactic plane (a 62-million year oscillation) would mean that the galaxy’s bow shock produces additional cosmic ray flux when the Sun reaches its extended position north of the galactic plane. This enhanced flux could damage the biosphere and would presumably do so for any inhabited world.

We may, then, have a plane near the center of the galactic disk perhaps 500 light years deep within which intelligent life is more likely to be found. It’s interesting to note that the highest power transient sources reported by Carl Sagan and Paul Horowitz in a 1993 paper lie close to the galactic plane, and the idea of a vertical oscillation of about 500 light years within which intelligent life is more likely gives us another way to focus our search on likely targets. 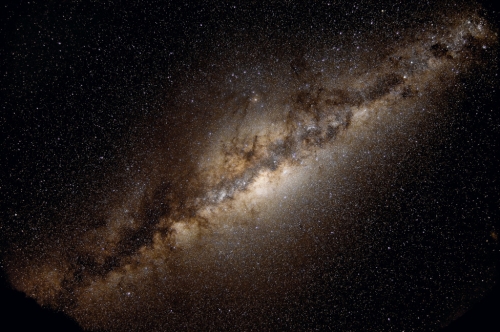 Image: The Milky Way in stars and dust, showing us the most likely regions of the sky in which to search for SETI signals. Credit & Copyright: Serge Brunier.

Now back to Heller and Pudritz, who have drawn on an idea first mooted in the 1980s. The two scientists suggest that we focus our attention to an even smaller swath of stars, as defined by planetary systems from which it is possible to see the Earth transiting in front of the Sun. Think of a thin strip around the ecliptic and project that strip onto the galaxy — Heller and Pudritz call this strip the Earth’s transit zone, or ETZ. The idea is that extraterrestrials observing the Earth from within the ETZ will have direct evidence that there is life here, which would make them more likely to attempt communications.

I’m running out of time this morning, but tomorrow we’ll look at the notion of the Earth’s transit zone as it applies to practical decisions about targets. It turns out there are numerous stars for us to look at, but it’s also a well-defined population of extremely high-priority targets.

The paper is Heller & Pudritz, “The Search for Extraterrestrial Intelligence in Earth’s Solar Transit Zone,” Astrobiology Vol. 16, No. 4 (2016) (preprint). The Benfords’ paper is “Searching for Cost Optimized Interstellar Beacons,” Astrobiology 10 (2010), 491-498 (abstract / preprint). The 1997 paper mentioning the transients I discuss above is Sullivan et al., “A Galactic Center Search For Extraterrestrial Intelligent Signals,” Astronomical and Biochemical Origins and the Search for Life in the Universe, IAU Colloquium 161, Publisher: Bologna, Italy, p. 653.