Into the ‘Transit Zone’

Given how powerful the transit method has proven for detecting exoplanets, we can assume great things are ahead. It won’t be that many years before we’re actually analyzing the atmospheric constituents of worlds much smaller than the gas giants for which we perform such studies now. That would make it possible for us to discover possible biosignatures. As I’ve speculated in these pages before, it may well be that we discover life on a planet around a distant star before we manage to discover it — if it exists — elsewhere in our Solar System. 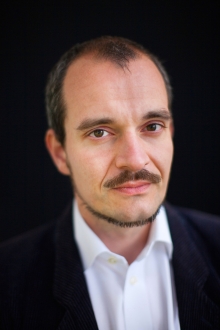 We’re looking at worlds around other suns with something of the same spirit that Carl Sagan and the Voyager team looked back from the outer reaches and saw the Earth as a ‘pale blue dot.’ It’s a comparison that René Heller and Ralph E. Pudritz draw in their recent paper on SETI strategy. Except here we’re talking about extraterrestrial observers looking at our planet, the assumption being that if we can make these studies using our current technologies, so can another species, and certainly one with tools that may be much improved over our own.

A Thin Strip of Sky

Thus we get what the researchers are calling the Earth’s Transit Zone, or ETZ. It’s that region from which another civilization would be able to detect the Earth as a transiting planet in front of the Sun. Heller (Max Planck Institute for Solar System Research, Göttingen) and Pudritz (McMaster University, Ontario) analyze this thin region, a strip around the ecliptic projected out onto the galaxy. The entire ETZ amounts to about two thousandths of the entire sky, which is precisely why the authors like it. Says Heller:

“The key point of this strategy is that it confines the search area to a very small part of the sky. As a consequence, it might take us less than a human life span to find out whether or not there are extraterrestrial astronomers who have found the Earth. They may have detected Earth’s biogenic atmosphere and started to contact whoever is home.”

What the researchers provide is an extension of ideas that go back at least into the 1980s, and were discussed in a 1990 paper by the Russian astronomer L. N. Filippova, who presented a list of nearby stars near the ecliptic that would be good targets for SETI. A 2008 poster at the American Astronomical Society produced by Richard Conn Henry, Steve Kilston and Seth Shostak addressed the matter as well, making this case in its abstract:

…the best hope for success in SETI is exploration of the possibility that there are a few extremely ancient but non-colonizing civilizations; civilizations that, aeons ago, detected the existence of Earth (oxygen, and hence life) and of its Moon (stabilizing Earth’s rotation) via observations of transits of the Sun (hence, ecliptic, which is stable over millions of years…, and have been beaming voluminous information in our direction ever since, in their faint hope (now realized) that a technological “receiving” species would appear. To maintain such a targeted broadcast would be extremely cheap for an advanced civilization. A search of a swath centered on our ecliptic plane should easily find such civilizations, if they exist. 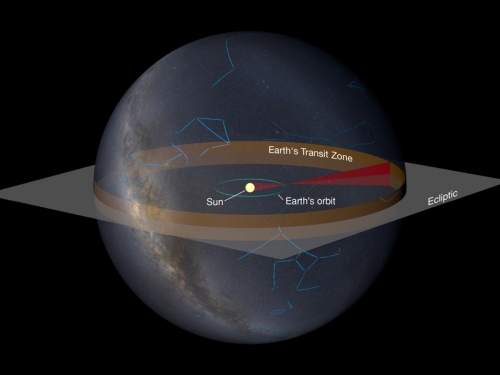 But Heller and Pudritz don’t limit themselves to intentional communications of this sort. Whether it’s leakage radiation or directed signals, their intent is to present a rigorous geometric description of the Earth Transit Zone for SETI use, one that contains almost 100,000 stars, with a small sub-group of 82 nearby stars that can serve as an early target list. The authors point out that the PLATO mission, to be launched by the European Space Agency in 2024, will use the transit method to find small planets around many bright stars like those on the list.

“PLATO might even detect the transits of exoplanets, whose possible inhabitants would be able to see the Earth transiting the Sun,” Heller adds. “Such a crazy setup would offer both them and us the possibility of studying each other’s planets with the transit method.”

As to the size of the ETZ, the paper notes that the galactic disk has a width of some 600 parsecs at the Sun’s location. Bear in mind that the Solar System is tilted against the galactic plane by about 63,° which gives us an Earth Transit Zone whose path through the disk is about 1 kiloparsec long (3261 light years). Heller and Pudritz do not consider M-dwarfs, but place their focus on K and G-class stars. The paper describes the selection of the 82 priority stars:

By rejecting all F, A, and B stellar types we make sure that we only take into account stars with lifetimes long enough to actually host habitable planets for billions of years. A more sophisticated approach would make use of the stellar ages (if known) for the remaining K and G stars, as done by Turnbull and Tarter (2003a), as some of these targets might still be very young with little time for the emergence of an intelligent species. Nevertheless, most of these stars should be of similar age as the Sun since they are in the solar neighborhood of the Milky Way. The rejection of giants and subgiants finally leaves us with 45 K and 37 G dwarfs.

What we see in the Earth Transit Zone is a way of confining our SETI search to a high-priority region that runs as a 0.528° ribbon along the ecliptic, defining that place where extraterrestrial astronomers would be able to see non-grazing transits of the Earth in front of the Sun. Heller and Pudritz estimate the total number of K and G dwarfs within 1 kiloparsec inside the ETZ is about 100,000, with estimates for habitable zone terrestrial planets from among this number reaching as high as 10,000. SETI thus gets a highly confined search area within which to focus its attention as we look for signs that planets we can discover may have discovered us.

The paper is Heller, “The Search for Extraterrestrial Intelligence in Earth’s Solar Transit Zone,” Astrobiology Vol. 16, No. 4 (2016). Preprint available. See also this news release from the Max Planck Institute for Solar System Research. If you’re interested in digging into the early history of the ecliptic and ETZ concept, check the Filippova paper mentioned above, which is “A List of Near Ecliptical Sun like Stars for the Zodiac SETI Program,“ Astronomicheskii
Tsirkulyar 1544:37 (1990). See also Filippova’s 1998 paper with V. S. Strelnitskij, “Ecliptic as an Attractor for SETI,” Astronomicheskii Tsirkulyar 1531:31.

Next post: Aftermath: Debris Disk around a Red Giant