The Odds on Starshot

Yesterday’s announcement of Breakthrough Starshot brought an email from exoplanet hunter Greg Laughlin (UC-Santa Cruz), whose work has been an inspiration to me since the early days of Centauri Dreams. One of Greg’s new projects, working with Anthony Aguirre (Foundational Questions Institute) and several other colleagues, is a website called Metaculus, which bills itself as “a community dedicated to generating accurate predictions about future real-world events by aggregating the collective wisdom, insight, and intelligence of its participants.” In other words, this is a kind of prediction market space for science and tech issues.

Breakthrough Starshot fits the bill here exactly, because Metaculus is all about the probability of future events, some of which can be predicted to a high degree, while others are purely a matter of calculated odds. The site is open to all and contains the basic information about its methods, and any logged in user can propose a question for consideration. Starshot comes into play through a series of four questions now available under the category ‘To the stars!’:

The questions are now active on the site, and I think you’ll enjoy having a look and perhaps getting involved with your own predictions. It’s interesting to cull through the other questions as well ranging from discoveries at the LHC to the Turing Test. As the site notes:

Like many mental capabilities, prediction is a talent that persists over time and is a skill that can be developed. By giving steady quantitative feedback and assessment, predictors can improve their skill and accuracy, as well as develop a quantified track record. Then, probabilities of future events can be reliably drawn by optimally aggregating predictions — counting more heavily those with domain expertise and a strong prediction track record.

Dennis Overbye is one of our most incisive science writers. I’ve profited from his work ever since his Lonely Hearts of the Cosmos (HarperCollins, 1991) and continue to read him in the New York Times. And it doesn’t surprise me at all to find that Breakthrough Starshot has triggered his usual elegance in the essay Reaching for the Stars, Across 4.37 Light-Years:

If it all worked out — a cosmically big “if” that would occur decades and perhaps $10 billion from now — a rocket would deliver a “mother ship” carrying a thousand or so small probes to space. Once in orbit, the probes would unfold thin sails and then, propelled by powerful laser beams from Earth, set off one by one like a flock of migrating butterflies across the universe.

That lovely image reinforces what some of us believe, that swarms of spacecraft, offering crucial redundancy and working at the far edge of miniaturization, are the most promising technology for deep space exploration at this level of our development. Milner’s advisers, who include Avi Loeb (Harvard), Pete Worden (former director of NASA Ames), Saul Perlmutter (UC-Berkeley), Freeman Dyson (IAS, Princeton) and Ann Druyan (producer of Cosmos), clearly agree, despite costs that will eventually reach $5 billion to $10 billion. 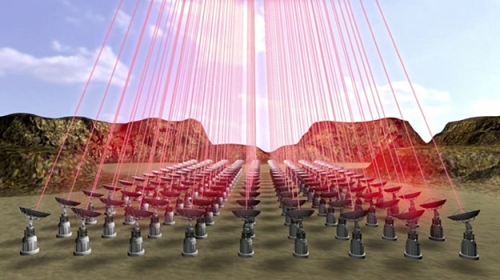 Image: A phased laser array, perhaps in the high desert of Chile, propels sails on their journey. Credit: Breakthrough Initiatives.

Given that the phased laser array Milner contemplates would have to generate 100 gigawatts of power for the crucial two minutes of acceleration on the sails, the task ahead is daunting. Thousands of lasers, as Overbye notes, will have to fire in perfect unison, and because this is a beamer built on the Earth, adaptive optics will have to compensate for atmospheric distortion. Moreover, we have to design a sail that will ‘ride’ the beam rather than be blown off it, and one that will be so highly reflective that it will absorb less than 1/100,000th of the energy applied to it.

These are problems that Robert Forward faced with his Starwisp design, a kilometer-wide ‘spider web’ of a sail driven by microwaves, with sensors scattered throughout the sail itself. It was Geoffrey Landis who would go on to show that as described, Starwisp would likely vaporize under the powerful beam meant to drive it to Alpha Centauri, causing a flurry of re-thinking of sail materials and design. But leaving the fuel at home is a powerful technique, and advances in technology may get us to the kind of materials that can withstand the photon torrent.

Writing for The Atlantic, Ross Andersen describes the sail this way in Inside a Billionaire’s New Interstellar Mission:

Picture a thin disc about the size of a round picnic tabletop. It would have miniaturized electronics onboard, including a power source, cameras, photon thrusters for navigation, and a laser for communication. Some of this kit would be bundled into the disc’s center, and some would be distributed through the rest of the sail. But it would all be a single unit: If you saw it streaking by, it would look like a flat, round sheet of reflective material.

We’ve also got a problem in that concept, because Jim Benford has pointed out that a flat sail is not a good ‘beam-rider’ — we’ll likely have to look at the kind of curved sail designs both Jim and brother Gregory Benford have studied in lab work at the Jet Propulsion Laboratory. But get a sail under that beam successfully and it reaches Pluto the day after launch, as Andersen notes. Another 20 years and it’s streaking through the Alpha Centauri system.

In any case, these are among the host of questions that the $100 million investment Milner is putting into the project will hope to answer, research extensive enough to offer proof of concept and finalize the design for a system that will eventually cost as much as the largest scientific projects we have built up to this time. A reusable facility may grow out of all this, one capable of sending fleets of small sails to our choice of nearby stars and returning imagery (the latter — data transmission at interstellar distances with craft this small — is another of the challenges that will have to be addressed. In a time of scaled-back thinking and low expectations, Breakthrough Starshot offers a sudden jolt of optimism that a new wave of research is on the horizon.