Heading for the hotel lobby the first night of the Breakthrough Discuss meeting, I thought about a major theme of the Breakthrough Starshot initiative: Making things smaller. Robert Forward wrote about sails hundreds of kilometers in diameter, and vast lenses deep in the Solar System to collimate a laser beam that would drive them. But Breakthrough Starshot is looking at a sail four meters across, carrying a payload more like a smartphone than a cargo ship. That big lens in the outer system? No longer needed if we can power up the sail close to home.

How to Look at Alpha Centauri

Digitization works wonders, and Moore’s Law takes us into ever smaller and more tightly packed realms on silicon chips. The trend affects every aspect of spaceflight and astronomy, as witness ACEsat, a small coronagraph mission with an explicit mission, the search for planets around Alpha Centauri A and B. Ruslan Belikov (NASA Ames), working with Northrop Grumman, led the team that conceived this mission, which was recently submitted for NASA Small Explorer funding. The funding did not come through, but the ACEsat idea persists.

At Breakthrough Discuss, we heard Ruslan Belikov describe the mission. Lead author of a recent paper on the work (“How to directly image a habitable planet around Alpha Centauri with a 30-45cm telescope,” available here), Belikov showed a half-scale model of ACEsat that was small enough to hold in your hand. The mission as currently conceived uses a 35 centimeter by 18 cm optical mirror, fits into a CubeSat, and in the view of its creators, is capable of directly imaging Earth-like planets around Alpha Centauri (see ACEsat: Alpha Centauri and Direct Imaging, Ashley Baldwin’s article from last December, for more).

“Alpha Centauri isn’t the tip of the iceberg,” Belikov told conference attendees during a panel discussion on exoplanet detection. “It is the iceberg. We know that small stars like Barnard’s Star or Proxima Centauri have small habitable zones. But nature has given us Alpha Centauri, a favorable outlier — think about how large its habitable zone appears on the sky in terms of its angular size. We would need a telescope three times larger for other stars.”

When asked what surprises we would find around the Alpha Centauri stars, Sara Seager (MIT) suggested that the biggest surprise would be finding a true Earth twin with life on it, and Belikov was quick to agree — “Sara stole my answer,” he said with a laugh. But Seager would go on to talk about future telescopic efforts focusing on just one object, one specialized type of telescope for each type of star. That more specialized approach seems to fit in nicely with Belikov’s ACEsat concept, tuned as it is for not just a specific type of star but a specific stellar system.

Cornell’s Lisa Kaltenegger urged the audience to think about an Earth ‘twin’ being utterly unlike what we might imagine:

“A world like this could meet our conditions for habitability and yet be much different from the Earth. We can imagine a different kind of biota taking over. When you think about an Earth twin, don’t think about the picture you know. Think yellow, think green, whatever color you want. We can look at some of the exotic deep water fish we find in the ocean and realize that they, as strange as they seem, evolved right here. What might wind up evolving around Centauri?”

Kaltenegger’s remarks drew on her work at the Carl Sagan Institute, where she has built a new interdisciplinary research group spanning ten departments. The effort includes a color catalog that examines the differing reflectivity of various planets depending on possible biota. Which gets us to a major point about Breakthrough Starshot. As Kaltenegger mentioned more than once, data return from the nearest stars needs to include more than basic photographic images. Spectroscopic analysis is crucial as we examine planetary atmospheres for biosignatures.

Natalie Batalha (NASA Ames) pointed out that while we all hoped to find planets in the habitable zone of Alpha Centauri, we might consider that a null result there could still leave us with interesting science. We have not resolved the surface features of any main sequence star except for our own Sun. An Alpha Centauri mission gives us the prospect of resolving the surface of three stars, a science windfall that adds to the benefits of the mission. 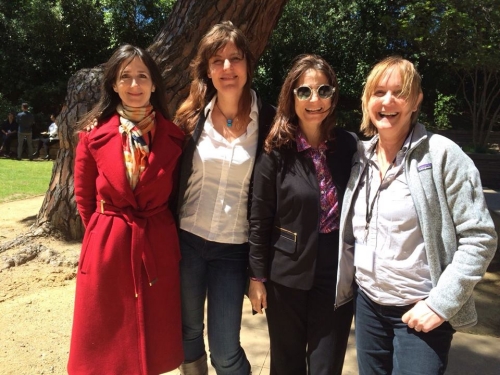 SETI and Its Consequences

The question and answer sessions at Breakthrough Discuss tended to run into our break periods, when many of the issues continued to circulate. A key issue for SETI is that factor in the Drake equation that addresses the lifetime of a technological civilization. Just how long do such entities survive? It’s an issue that lies like morning fog over the SETI landscape as we look at our own problems with the proliferation of powerful weapons systems and ask what happens when small organizations, even individuals, can acquire ever more deadly capabilities.

Here Harvard’s Avi Loeb brought up a point many others had been thinking about, to judge from the ensuing conversations outside. We naturally focus on finding biological life because that is what we are, but the technologies we are discussing remind us off the possibility that life transforms at a certain level of its development into a technological phase that leads to post-biological intelligence. Sara Seager pointed to existing tools like pacemakers and artificial limbs — if life goes post-biological, how do we create a SETI capable of identifying it?

For that matter, what do we do if it’s non-biological, as Denise Herzing (Florida Atlantic University) asked. Researching dolphin communication through the Wild Dolphin Project, Herzing wonders what the signatures of a non-technological species might be. We are only beginning to understand the complexity of dolphin communication. What if a Breakthrough Starshot mission encounters a world with an intelligent, non-technologial species in charge? Is there any way we could identify it? 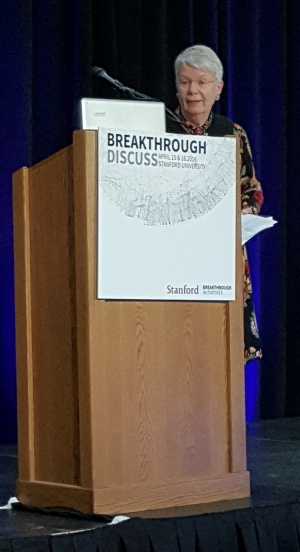 The SETI session itself, led by Jill Tarter, focused on optical SETI and the new directions it opens to scrutiny. Again, the issue seems timely given the nature of the Starshot initiative, for as we conceive of technologies here on Earth, we then must ask whether equivalent technologies would be visible to us. Breakthrough Starshot envisions using phased laser arrays scaling up to the 100 GW level. As we learn how to create such ‘beamers,’ we have to ask whether the most common SETI signature in the optical might not be transient pulses that are the byproducts of other activities rather than intentional efforts to communicate with us.

Puzzlingly, Jim Benford’s paper on that very idea was put into the session on using the Sun as a gravitational lens, but the methods Benford is discussing are very much part of the optical SETI landscape. Centauri Dreams readers already know Benford’s findings: Depending on the use of the beamed energy technology, we would indeed be able to detect transient signals from another star with equipment existing today (see Quantifying KIC 8462852 Power Beaming for background). See also “Power Beaming Leakage Radiation as a SETI Observable,” available here).

Moreover, there does exist a communications dimension, as Benford explained:

“SETI messages may be found on power beaming leakage. That leakage is more powerful than any beacons we’ll ever be likely to build, so we should look at transient signals to see if there is a message embedded on them.”

Beamed energy options for an advanced civilization might involve everything from microwave thermal rockets (beaming to orbit) to orbit boosting to interplanetary and even interstellar missions. With each of these missions, you get progressively higher energy usage. And we can certainly go beyond this list of applications into areas like asteroid deflection, which might one day be necessary to adjust a dangerous trajectory using a high-powered laser. Another possibility: Using a beamer to create a thrust (by evaporation and desorption) of a comet’s surface, which might be a technique one day used in terraforming a planet like Mars.

Benford points out that given their visibility over interstellar distances, many of these uses of beamed energy should make us reconsider optical SETI strategy. Rather than focusing on narrow-band transmissions of the kind likely to be found in a beacon, we should look for more powerful beams with a wider bandwidth. Whereas earlier optical SETI work has involved the 1 − 10GHz microwave band, we might, considering our atmosphere, want to examine bands where lower oxygen and water vapor allow transmission, which means windows at 35GHz, 70 − 115GHz, 130 − 170GHz and 200 − 320GHz.

The caveat is that power beaming is not isotropic but highly directed. The geometry is not always going to favor detection — the fact that we do not see the beam does not mean that it is not there. An interesting suggestion is to revisit the thousands of transients that have been observed and are now stored in the archives of the SETI@home project.

James Guillochon (Harvard) examined rapid travel in the Solar System via lightsails powered by beamed radiation, underlining some of Benford’s points. A lightsail network in the Solar System is the kind of SETI observable Benford and son Dominic have already addressed in their upcoming paper, the point being that leakage around the edges of the sail cannot be avoided. You may recall that Guillochon, working with Avi Loeb, discussed SETI possibilities in 2015 in “SETI via Leakage from Light Sails in Exoplanetary Systems,” available here). 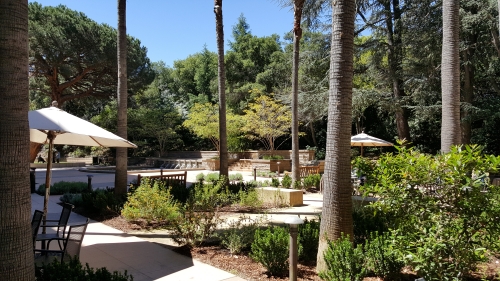 Image: Beautiful weather and a Palo Alto spring made the occasional break a welcome chance to relax.

But enough for today. More SETI discussion tomorrow, after which we move into the Breakthrough Starshot mission itself as described by former NASA Ames director Pete Worden, and the possibilities of the Sun’s gravitational lens as both a mission target and a mission facilitator.