As we’ve been talking about the Sun’s gravitational focus, it’s interesting to reflect on the history of its study. Albert Einstein’s thinking about gravitational lensing in astronomy was explicitly addressed in a 1936 paper, but it wasn’t until 1964 that Stanford’s Sydney Liebes produced the mathematics behind lensing at the largest scale, working with the lensing caused by a galaxy between the Earth and a distant quasar. Dennis Walsh, a British astronomer, found the first actual quasar ‘image’ produced in this way back in 1978, with Von Eshleman’s study of the Sun’s lensing the following year including the idea of sending a spacecraft to 550 AU.

SETI was on Eshleman’s mind, for he pondered what could be done at the 21 cm wavelength, the SETI ‘waterhole,’ and so did Frank Drake, who presented a paper on the concept in 1987. If you have a good academic library near you, its holdings of the Journal of the British Interplanetary Society for 1994 will include the proceedings of the Conference on Space Missions and Astrodynamics that Claudio Maccone organized two years earlier. FOCAL was now being considered, though in a mission then called SETISAIL, even though SETI would be only one aspect of its scientific investigations.

Finding ways to exploit the gravitational lens of the Sun forces us to take into account the Sun’s corona, a problem both Eshleman (Stanford) and Slava Turyshev (JPL) soon addressed. We’d like to get a spacecraft not just to 550 AU, but well beyond it to avoid coronal distortion, taking advantage of the fact that we are not dealing with a focal point but a focal line. Let me quote one of Claudio Maccone’s papers on this (citation at the end of this post):

…a simple, but very important consequence of the above discussion is that all points on the straight line beyond this minimal focal distance are foci too, because the light rays passing by the Sun further than the minimum distance have smaller deflection angles and thus come together at an even greater distance from the Sun.

Thus we have the ability to move well beyond 550 AU, and in fact have no choice but to do so. The Sun’s corona creates what Maccone calls a ‘diverging lens effect’ and opposes the converging effect we associate with a gravitational lens. The result is that the minimum distance the FOCAL craft must reach (here I’m paraphrasing the paper) is higher for lower frequencies (of the source electromagnetic waves crossing the Solar corona) and lower for higher frequencies. Thus at 500 GHz, the focus is about 650 AU. At 160 GHz, the focus is at 763 AU.

But are we limited to using the Sun and, if we build radio ‘bridges’ as discussed yesterday, nearby stars as gravitational lenses? It turns out that planets too can be used for this purpose. In his 2011 study of this idea, which appeared in Acta Astronautica, Maccone produces the needed equations, noting that the ratio of a planet’s radius squared to its mass lets us calculate the distance a spacecraft must reach to take advantage of planetary lensing. From that we have defined what he calls the planet’s focal sphere. 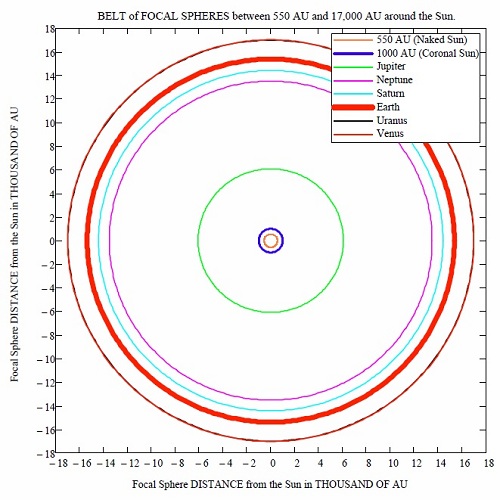 Image: The complete BELT of focal spheres between 550 and 17,000 AU from the Sun, as created by the gravitational lensing effect of the sun and all planets, here shown to scale. The discovery of this belt of focal spheres is the main result put forward in this paper, together with the computation of the relevant antenna gains. Credit: C. Maccone.

Lensing Moves into the Oort Cloud

The figure above may contain a few surprises. We would expect Jupiter to top the list of planetary lenses, and indeed, its focal sphere is the next out from the Sun at 6100 AU. That’s a useful number to keep in mind, because we may discover that the Sun’s coronal effects are simply too powerful to overcome to produce the needed images. If so, we have a target halfway out to the inner Oort Cloud that we can also use to study the lensing phenomenon.

Beyond this, notice that Neptune, which has a high ratio between the square of its radius and its mass, comes next, at 13,525 AU. Saturn’s focal sphere is 14,425 AU out, and next we find our own Earth, with a focal sphere at 15,375 AU. Our planet makes a better lensing candidate than Uranus because it is the body with the highest density (ratio of mass to volume) in the Solar System. Maccone likes to point out that because we know the Earth’s surface and atmosphere better than that of any other planet, a FOCAL mission using the Earth as a lens would begin with a significant advantage as we try to untangle a lensed image of a distant object.

How would we take advantage of these planetary focal spheres? They extend all the way out to 17,000 AU in the case of Venus. As the figure makes clear, a fast spacecraft departing the Solar System could examine any of them in turn, beginning with observations as the Sun’s coronal effects begin to subside. Noting that a spacecraft enroute to Alpha Centauri would cross all these focal spheres, Maccone muses on the results of such a crossing:

First of all, while the Sun does not move in the Sun-centered reference frame of the Solar system, all the planets do move. This means that they actually sweep a certain area of the sky, as seen from the spacecraft, so that a spacecraft enjoys a sort of moving magnifying lens. How many extrasolar planets would fall inside this moving magnifying lens? Well, we don’t know nowadays, of course, but the over 400 exoplanets found to date [the paper appeared in 2011] are a neat promise that many more such exoplanets could be detected anew by a suitably equipped spacecraft crossing the distances between 550 and 17,000 AU from the Sun thanks to the gravitational lenses of the planets.

Such discoveries would be serendipitous, to say the least, as our Alpha Centauri mission would just be seeing what happened to be in line with the planet being studied as it departed the system. But having Jupiter at 6100 AU and the Earth at 15,375 AU does offer us useful targets for experimentation with the technologies we’ll need to tease images out of a focal sphere encounter. One of the big if’s of Breakthrough Starshot is the construction of operation of the phased laser array. But if it is built and we can achieve velocities of a significant fraction of c, then dedicated missions to explore planetary lensing would be sensible.

Clearly the Sun is our first choice as a gravitational lens not just because of the relative proximity of its minimum focal distance (550 AU) but because the effective gain of the Sun is so much higher than that of Jupiter, and far higher than the low gain we could expect to achieve with the Earth as a gravitational lensing body. Maccone calculates numerical values for the gain at frequencies ranging from the hydrogen line up to the CMB peak at 160 GHz, evaluating each of these for the Sun’s gravitational lens as well as the focal spheres of the various planets. If we want to work with the lensing potential of planets, we’ll need major advances in antenna and imaging technologies to overcome the weak signatures the planets provide.