If the star KIC 8462852 is on your mind — and the lively and continuing comments threads on the topic in these pages suggest that it is — you’ll want to know about a new campaign to support further study. ‘Tabby’s Star,’ as it is informally known (after Tabetha Boyajian, whose work at the Planet Hunters project brought the star into prominence), continues to vex astronomers with its unusual light curves. What is causing the star to dim so dramatically remains problematic, with suggestions ranging from comet swarms to extraterrestrial engineering. 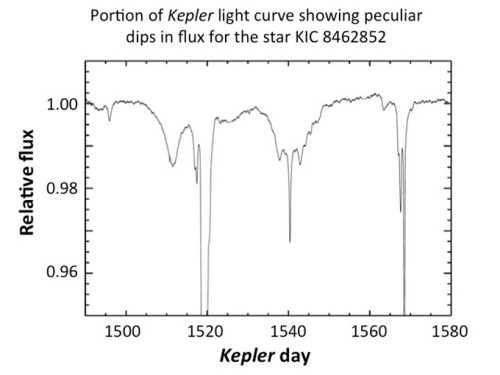 A Kickstarter project is now in the works to support further investigation, hoping to extend an effort that has already begun. Boyajian’s team has initiated observations on the Las Cumbres Observatory Global Telescope Network, a privately run effort that maintains telescopes around the world to make sure an object can be examined continuously. Four years of Kepler data have shown us that the dips in the light curves from KIC 8462852 are not periodic, which means the monitoring needs to be continuous because we can’t predict when the next dip will come.

So far, the Las Cumbres network has given 200 hours of observing time, work that will support observations through the summer. The Kickstarter campaign intends to raise $100,000 to fund an entire year of observations, which will include a total of two hours per night. The plan is to observe the star at different wavelengths, alerting larger facilities when something interesting is happening. Variations in dimming at particular wavelengths can tell us much about what kind of material is causing the effect, perhaps supporting a hypothesis like cometary gases or dust.

Jason Wright and Kimberly Cartier (Penn State), calling KIC 8462852 ‘the most mysterious star in our galaxy,’ looked toward the next round of study in a recent essay in The Atlantic:

When the star dims again, we will use telescopes around the world to measure how much the star dims at different wavelengths. Since different substances have characteristic absorption patterns, this will tell us the composition of the intervening material. For instance, if it dims much more at ultraviolet wavelengths than in the infrared, we will know dust is to blame. If we see the characteristic pattern of cometary gases, that will help confirm the cometary hypothesis.

And if we see the same brightness changes at all wavelengths? That would indicate that whatever is blocking the starlight is big and opaque—inconsistent with comets, but consistent with the alien megastructure hypothesis.

The intense interest in KIC 8462852 created a flurry of work among amateur astronomers, including dozens working with the American Association of Variable Star Observers. We do have data from the AAVSO effort so far, but as Boyajian notes in the Kickstarter materials, there is a good deal of scatter in the measurements depending on observer and equipment. 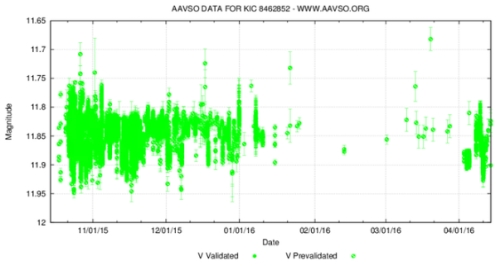 Image: A graph showing brightness measurements (in magnitude) for KIC 8462852 contributed by over 50 AAVSO observers. Although the star displays constant brightness during this time, observer-to-observer offsets smear out any signal of a dip. Credit: AAVSO.

The benefits of using the Las Cumbres network are clear:

If just AAVSO data are used alone, the myriad of offsets and random sampling from many observers (even if greatly reduced by giving more specific instructions to the observers) may always obscure the fine details of the brightness behavior of our star. That is, with a patchwork of observers, dips ~5% or smaller may not be recognizable in near-real-time with AAVSO data (and the Kepler data show there are very few dips greater than this level).

Not all is lost however. The LCOGT data will have the dense sampling with a single consistent system, so dips below the 1% level can be spotted. This also means that we can use the LCOGT data as a very valuable training set to help amateur observers to improve their techniques. By educating amateur observers in this way, their data can be made more precise and can be corrected for systematic offsets. And by accomplishing this, we will greatly increase the number of observations to be used in our final analysis.

Thus we get not only continuous monitoring of KIC 8462852 but a much more finely calibrated way to look for future dips in the light curve of the star. You can see, too, that this is the kind of project to which a fast and relatively inexpensive campaign like this one is ideally suited. Getting observation time on large facilities is always tricky because of the high demand, and private observatories are usually paid through grants, most of which don’t make it through the funding process. When you need a lot of telescope time to look at an anomaly like KIC 8462852, crowdsourcing turns out to be the best and perhaps the only viable option.

A search through the archives here will pull up the numerous articles about KIC 8462852, but I’d also urge you to dig into the comments section, particularly for the more recent posts, as the discussion has been lively. For overall background, you’ll want to have a look at this thorough explanation of what we’ve learned about the star so far from Paul Carr, who is also active in the comments threads here. Paul’s Dream of the Open Channel is a site you’ll want to follow on a regular basis as we continue to look at this puzzling star. He is also an active podcaster on SETI and related matters, with links provided on the Open Channel site.

As for the Kickstarter project, I see that as of Monday morning, it has raised close to $20,000, with 25 days to go toward the $100,000 goal. The Las Cumbres observing campaign offers us precious new data to add to the Kepler cache and the continuing AAVSO effort. As to Kepler itself, we’re now deep into the K2 mission and KIC 8462852 is no longer observable. To find out when the next dips will occur and test theories about what may be happening here — ringed planets? dust clouds? cometary debris? — Las Cumbres looks like our best bet. Let me encourage you to contribute what you can as we get this observational campaign into gear.

Next post: Bradley Schaefer: Further Thoughts on the Dimming of KIC 8462852