Bradley Schaefer: Further Thoughts on the Dimming of KIC 8462852

Is the anomalous star KIC 8462852 undergoing a long-term dimming or not? We’ve looked at Bradley Schaefer’s work on the star and the follow-ups disputing the idea from Michael Hippke and Daniel Angerhausen (NASA GSFC), with collaboration from Keivan Stassun and Michael Lund (both at Vanderbilt University) and LeHigh University’s Joshua Pepper. Dr. Schaefer (Louisiana State University) believes the evidence for dimming is still strong, and in the post below explains why. He has also provided a link to a more detailed analysis with supporting graphs and figures for those who want to go still deeper (further information below). As we embark on the Kickstarter campaign to put ‘Tabby’s Star’ in the sights of the Las Cumbres Observatory Global Telescope Network — an important project to which I have contributed and hope you will as well — we continue to monitor this evolving story. No matter how it turns out, the Kepler data are iron-clad, so the success of the Kickstarter campaign is vital to provide us with the further data we need to make sense of what we are seeing at this unusual star. 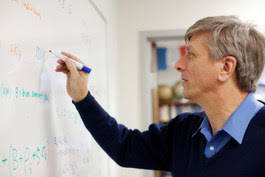 The dips shown by KIC 8462852 (Tabby’s Star) are still a profound mystery. Further, I have found that Tabby’s star has faded by ~20% from 1890 to 1989 as measured from the Harvard plates. (This is now Schaefer 2016, ApJLett, 822, L34.) A straight line fit to the light curve gives a slope of +0.164 ± 0.013 magnitudes-per-century. The quoted error bar here is from the measurement error (as taken by a chi-square fit), whereas there is some larger systematic error associated with all the usual small problems in photographic photometry and the sampling of the plates.

To measure the systematic errors, I used 12 uncrowded check stars of the same magnitude and color as Tabby’s star, and all within ~22 arc-minutes. The average of the linear slopes is -0.007 mag/century, with an RMS scatter of 0.044 mag/cen. With the systematic error dominating, the century-long decline of Tabby’s Star is significant at the 4.0-sigma level (i.e., a probability of 0.000064 of such a high slope occurring by chance, even with systematic errors).

Two papers (Hippke et al. arXiv:1601.07314v4 & Lund et al. arXiv:1605.02760v1) have recently appeared with the basic claim that the historic light curves from Harvard (as part of the DASCH [Digital Access to a Sky Century@Harvard] database) have a much larger systematic error, more like ±0.15 mag/cen, with the agreed slope for Tabby’s Star then not being anything special. If the DASCH RMS scatter in the fitted linear slopes is really this large, then the existence of the century-long fading in Tabby’s Star would not be significant.

The two papers of Hippke and Lund have been widely publicized, because both authors have run to the press first. Indeed, Hippke contacted at least one reporter *before* he had submitted the first version of his paper. (At that time, Hippke had known about the existence of the Harvard plates for only two weeks, he had talked with zero people who had ever seen any archival plate, and Hippke still has never laid eyes on any archival plate.) In the usual way of ‘social media’, Hippke’s and Lund’s claims have been highlighted as a refutation of the century-long dimming, and this has been extended to everything about KIC 8462852. For example, on the first day of the launch of the Kickstarter program, the Reddit talk had the statement that the person ‘thought this has all been refuted’.

Well, despite ‘social media’, it is actually Hippke and Lund that are definitely wrong. As I’ll show, any experienced worker can quickly find exactly what mistakes they made, so that their claimed large scatter of slopes arises simply from two distinct mistakes on their part. But I have no ordinary venue to put out any effective counters or proofs. For example, any further submission to ApJ or ApJLett would not have any new data to show, and it would appear only many months from now. Research on Tabby’s Star is moving fast, so Hippke’s and Lund’s claims need to be challenged soon. The best way that I can think of to get the challenge and proofs out is to place them into a detailed document plus an email (*this* email), and to send this out to people who have queried me for an analysis of Hippke’s and Lund’s manuscripts on Tabby’s Star. A link to the detailed document appears below.

I present three reasons to show that Hippke and Lund have incorrect claims:

Mistake #1 is that they selected many check stars that have some random nearby star at just the right distance so as to produce overlapping star images on the Harvard plates with large plate scales. The DASCH photometry uses SExtractor, and the algorithm returns something like the combined magnitude when the two star images overlap. This overlap produces an erroneously-bright magnitude for some plates. This occurs for most of the plates after the 1953-1969 Menzel gap (the Damon plates), resulting in an apparent jump across the Menzel gap. When the whole light curve is fit to a straight line, it will also result in an apparently brightening light curve.

Some crowding stars will cause this effect to be mainly visible on the RB & RH series or the AM & AC series, which result in the opposite sign for the jumps and slopes. In the linked PDF file below, I give many detailed examples, tables, and illustrations. That is, jumps in brightness across the Menzel gap and non-zero slopes are produced as pure artifacts of choosing check stars with nearby crowding stars. Now, critically, Tabby’s Star does not have any crowding stars. So it is not correct to choose any crowded-check-stars. No experienced researcher would make such a choice. It turns out that a large fraction of both Hippke’s and Lund’s stars with high claimed slopes are badly crowded. That is, many of their stars have high slopes simply due to this bad mistake.

This actually matters. The reason is that the KIC-calibrated light curve for some presumably-constant star often shows an apparent slope (and possibly a jump in brightness across the Menzel gap), whereas the APASS-calibrated light curve for the same star shows a perfectly flat light curve. I show several examples of this effect in the attached PDF file. With this, we see that the use of the KIC-calibration by Hippke & Lund is causing the jumps and slopes as pure artifacts. Their Mistake #2 would not be made by anyone experienced with the Harvard plates (or anyone who reads the DASCH website or papers).

The attached PDF file gives a detailed account of the commission of the errors. Between the two killer mistakes, all of Hippke’s and Lund’s claims are shown to be artifacts of their bad analysis.

Measure #1 is by myself, as given in fine detail in my ApJLett paper. I derive the century-long slopes for 12 uncrowded check stars that have essentially identical magnitude, color, and position as Tabby’s Star. Whatever systematic and measurement errors happen for Tabby’s Star on the DASCH photometry, the identical effects must be present on these 12 stars. No one can do any better than this for a direct measure of the real total errors. With this, the average slope is very close to zero, while the RMS of the slopes is ±0.044 mag/cen. The largest deviation from a flat slope is one at -0.070 mag/cen. I should mention that I have a vast experience with the Harvard plates, with nearly continuous work since 1979, something like 50 papers in refereed journals, plus five papers on the theory of photographic photometry.

Measure #2 is by Josh Grindlay. He is a professor at Harvard; he has been a long time user of the Harvard plates (going back before 1979), and he is the founder and leader of the DASCH program. He had long been using DASCH light curves, so he knew perfectly well that DASCH produces flat light curves for constant stars. With the spectacle of Hippke’s paper, he started a formal measure of many Landolt stars with the DASCH data. (Landolt stars have long served the community as standard stars, and they are most likely closely constant in brightness.) For 31 Landolt stars, Grindlay finds that the average fitted-linear-slope is -0.015±0.048 mag/cen.

So we have the two most experienced workers in the world, and we are getting an RMS in the fitted-linear-slope of 0.044-0.048 mag/cen. For Tabby’s Star, this results in the century-long dimming being near 4.0-sigma in significance. I think that these two solid measures by the most experienced people in the world are to be strongly preferred to a claim coming from people who have yet to lay eyes on any archival photographic plate.

Reason #3: The Dimming of Tabby’s Star Has Been Confirmed

Ben Montet is in the process of investigating the long-term photometric behavior of KIC 8462852 in a high quality independent data set, and his preliminary results support the finding that Tabby’s star is indeed fading.

Tabby’s Star is bright, and the Kepler data is legendary for its photometric accuracy and stability. If Tabby’s Star is fading at the rate of 0.164 mag/cen (which it might or might not still be doing), then it should have faded by 0.0073 mag over the Kepler lifetime on the main Cygnus Field. This should be discoverable by a careful analysis.

Apparently Montet has made such an analysis, and finds Tabby’s Star to be fading at some unspecified fade-rate. So we have an apparent confirmation of the fading of Tabby’s Star over 4.5 years, although certainly we must await a definitive paper coming from Montet. [A group at Pulkova Observatory has claimed to provide a weak confirmation of a fading of Tabby’s Star. This is based on just ten plates from 1922 to 2001.There is indeed a formally fading slope, but the real uncertainties are greatly larger than any claimed slope. This result is not a confirmation.]

For those interested in following this matter further, the document I discuss above, my “ANALYSIS OF HIPPKE et al. (2016) and LUND et al. (2016) is available.” Often the refutations of claims are not short, so I have presented the full details in this document. In sum: We have three strong reasons to know that Hippke’s and Lund’s claims are certainly wrong.