The second detection of gravitational waves by the LIGO (Laser Interferometer Gravitational-Wave Observatory) instruments reminds us how much we gain when we move beyond the visible light observations that for so many millennia determined what people thought of the universe. In the electromagnetic spectrum, it took data at long radio wavelengths to show us the leftover radiation from the Big Bang, and we’ve used radio ever since to study everything from quasars and supernovae to interesting molecules in interstellar space. Infrared helps us penetrate dust clouds and see not only into star-forming areas but the galactic center.

So much is learned by taking advantage of the enormous width of the electromagnetic spectrum, wide enough that, as Gregory Benford points out, visible light is a mere one octave on a keyboard fifteen meters wide. Ultraviolet tells us about the gaseous halo around the Milky Way and shows us active galaxies and quasars while helping us analyze interstellar gas and dust. X-rays and gamma rays deepen our understanding of black holes and matter moving at extremely high velocities, tuning up our knowledge of supernovae.

And now gravitational waves are taking us off the keyboard entirely. We’re at the dawn of gravitational wave astronomy, using distortions of spacetime itself to learn about the merging of black holes. The new detection from the LIGO team came on 26 December of last year, making the case that if we have found two black hole mergers in three months, such events must be relatively common in the universe. The work was announced at the recent meeting of the American Astronomical Society in San Diego and published in Physical Review Letters. 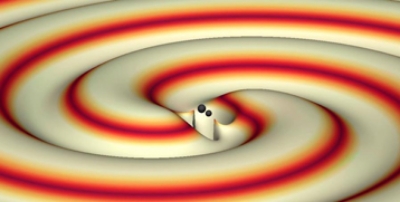 Image: Simulation of the motion of two black holes just before merging, and the gravitational waves they produce. Credit: Max Planck Institute for Gravitational Physics.

At a confidence level of 99.99999%, the GW151226 detection shows us a pair of black holes merging as they lose energy in the form of gravitational waves. The first detection, on 14 September 2015, involved black holes of 29 and 36 solar masses respectively. The second event involves black holes between 8 and 14 times as massive as the Sun, revealed to us in a signal that lasted about one second. Researchers believe the event took place about 1.4 billion light years from the Earth. A third possible detection came in October of 2015 but was at a much lower degree of certainty. It too is discussed in the Physical Review Letters paper.

As to GW151226 itself, we learn that the data are consistent with previous theory (public data are available here). From the Abbott et al. discovery paper:

Binary black hole formation has been predicted through a range of different channels involving either isolated binaries or dynamical processes in dense stellar systems. At present all types of formation channels predict binary black hole merger rates and black hole masses consistent with the observational constraints from GW150914. Both classical isolated binary evolution through the common envelope phase and dynamical formation are also consistent with GW151226, whose formation time and time delay to merger cannot be determined from the merger observation. Given our current understanding of massive-star evolution, the measured black hole masses are also consistent with any metallicity for the stellar progenitors and a broad range of progenitor masses.

Unlike electromagnetic waves, gravitational waves have the intriguing property that they propagate unperturbed once they have been created, which places the remote corners of the universe into our field of ‘view,’ as Asimina Arvanitaki (Stanford University) and Andrew Geraci (University of Nevada, Reno) pointed out in a 2013 paper that looked at ways to enhance gravitational wave detection. As our sensitivity to such signals increases, we should be able to move from black holes to neutron stars and supernovae, and perhaps the merger of binary stars, as events that can be examined by these techniques.

Two gravitational wave detectors are online in the United States (in Louisiana and Washington state) and one in Italy (the European Gravitational Observatory near Pisa), with Japan’s Kamioka Gravitational Wave Detector expected to become available in 2018 (I don’t know what the gravitational wave equivalent of ‘first light’ is, but maybe we should dream one up). India is working on a GW detector of its own. Five detectors will make locating the source of gravitational waves more accurate. Meanwhile, ESA’s LISA Pathfinder spacecraft (Laser Interferometer Space Antenna) is testing technologies that the upcoming eLISA (Evolved Laser Interferometer Space Antenna) will be using upon its planned launch in the 2030s.