Accurate distances are critical for understanding the physical properties of brown dwarfs and low-mass stars. We need to know the intrinsic brightness of these objects to proceed, but we can’t know that until we have an idea of their distance. After all, a relatively faint star can seem much brighter if nearer to us, while a distant bright star can appear deceptively dim. Intrinsic brightness is a measure of how stars would appear if observed at a common distance.

Enter an exoplanet search that began at the Carnegie Institution for Science in 2007, using the Carnegie Astrometric Planet Search Camera (CAPSCam) to look for gas giant planets and brown dwarfs orbiting nearby low-mass stars. A new report from the program tells us that it has measured the distance to 134 low-mass stars and brown dwarfs, 38 of which have had no previously measured trigonometric parallax.

These are all stars considered too faint for inclusion in the European Space Agency’s Hipparcos survey, but as the report explains, they are considered “…the best templates for studies of radii, atmospheric composition, metallicity, and other spectroscopic properties. In addition, low mass stars with excellent distances provide the templates for spectrophotometric distances to more distant stars.”

The Carnegie survey has focused on M, L and T dwarfs in the southern sky (CAPSCam operates on the 2.5-m du Pont instrument at the Las Campanas Observatory
in Chile). All the objects surveyed were believed to be within 20 parsecs (about 65 light years). The CAPSCam work is primarily about searching for exoplanets using astrometry, which attempts to detect the wobble of a host star around the center of mass of the system. The wobble is a telling indicator that a planetary object is affecting the host star’s motion.

Usefully for distance studies, CAPSCam is also capable of collecting parallax information. Here a target’s position in the sky is measured against a far more distant background from different points in the Earth’s orbit, allowing us to calculate the distance of the closer object. Stellar parallax was the method first used by Friedrich Bessel in measuring the distance to the star 61 Cygni at Königsberg Observatory. Accurate parallax computations from Earth’s surface are limited to about 300 light years because the more distance a star is, the smaller its parallax. 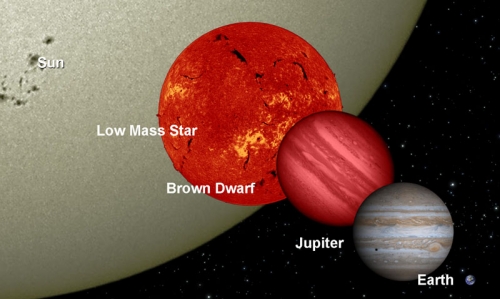 Image: A brown dwarf in relation to Earth, Jupiter, a low-mass star and the Sun. Credit: NASA.

Among the more interesting finds is GJ 3470, an M-dwarf with no previously published parallax. The Carnegie team comes up with a distance of roughly 29 parsecs, or 95 light years. GJ 3470 is significant because it is one of the few low-mass stars known to host a large planet, in this case a Neptune analog. The distance measurement allowed the researchers to refine earlier radius and density estimates, finding the planet is about half as dense as Neptune.

Also interesting is 2MASS J01392170−3936088, previously computed at about 15 parsecs, but now found to be slightly less than 9 parsecs (29 light years). Another brown dwarf, 2MASS J01365662+0933473, had no previously computed parallax. The new work finds it at a distance of 6.4 parsecs (20 light years). A number of earlier parallax distance computations are revisited in the paper, in some cases as much as doubling the previously calculated number.

In general, the CAPSCom work meshes with earlier parallax studies, with a few exceptions. From the paper:

For 79 of the 96 stars with previously published parallaxes, our measurements have lower uncertainty. In general there is very good agreement between ours and previous measurements; only 12 of the 96 disagree by more than 3 σ (of the less accurate measurement), and for 8 of these 12, the difference in parallax is <5%.

And as mentioned earlier, 38 of the CAPSCam targets had no previously measured parallax. Measurements like these can also help us learn a given star’s age, as witness G 161-71, whose parallax combined with the star’s radial velocity allows the team to peg it as part of the 30-50 million year old Argus association, a so-called ‘moving group’ of stars of similar age. The M-dwarf LP 870-65 is similarly found to be part of another moving group, the AB Doradus association, allowing the researchers to peg its age as approximately 100 million years.

Any fine-tuning of distance measurements is useful in determining stellar properties, but we’re especially interested in brown dwarfs because of the clues they may offer about star formation. After all, they can be found in mass ranges between gas giant planet and small star. M-dwarfs, meanwhile, are already known to host numerous planets, whose transit signatures will be studied by upcoming missions like TESS (Transiting Exoplanet Survey Satellite) and PLATO (PLAnetary Transits and Oscillations of stars). All this is part of populating our catalog of planets around nearby brown dwarfs, M-dwarfs, K-dwarfs and G-class stars like the Sun.