Into the Nebula: Low-Mass Objects in Orion

Because we want to learn more about how stars form, we study the so-called Initial Mass Function, which tells us, for a given population of stars, the distribution of their initial masses. As one recent reference (the Encyclopedia of Astrobiology, Springer, 2011) puts it: “The initial mass function is the relative number of stars, as a function of their individual initial mass, that forms during a single star forming episode.” Figuring out the IMF for places like the Orion Nebula, visible from Earth with the naked eye as a patch in Orion’s sword, is a start in learning how this grouping of stars formed.

About 1350 light years from Earth, the Orion Nebula is known as an H II region, a reference to the fact that it contains ionized hydrogen in its star-forming, gaseous depths. A surprise emerged when the European Southern Observatory put its HAWK-I infrared instrument on the Very Large Telescope to work on the nebula. What turned up were faint brown dwarfs and isolated objects of planetary mass in much larger numbers than expected. Says Amelia Bayo (Universidad de Valparaíso, Chile), a co-author of the paper describing the results:

“Understanding how many low-mass objects are found in the Orion Nebula is very important to constrain current theories of star formation. We now realise that the way these very low-mass objects form depends on their environment.” 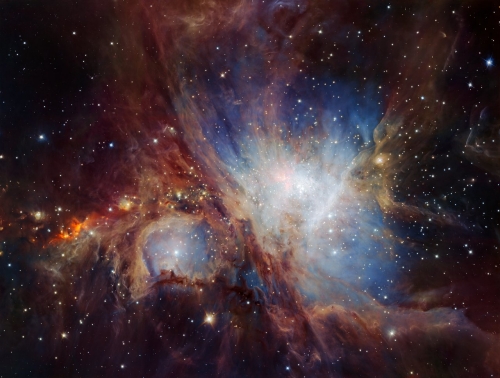 Image: A deep infrared view of the Orion Nebula from HAWK-I. Credit: ESO.

Indeed. The sheer numbers involved here show us that the Orion Nebula may be forming far more low-mass objects than less active star formation areas. The study finds that apart from 929 low-mass stars (less than 1.4 times the mass of the Sun), the Orion Nebula’s Initial Mass Function contains some 757 brown dwarf candidates and 158 ‘isolated planetary mass objects’ (IPMO). The latter have masses greater than 0.005 Solar masses. Overall, the study finds a high fraction of substellar objects (about 50%), ten times more than previously estimated.

Before HAWK-I went to work, the largest grouping of objects known in the Orion Nebula were about one quarter as massive as the Sun. We now have a second maximum to work with at a much lower level of mass. How to explain this ‘bimodal Initial Mass Function’? The authors argue that the excess of brown dwarfs and planetary mass objects is probably produced by ejected material from circumstellar disks, citing recent simulations on pre-stellar disk fragmentation. “We suggest that the final explanation for Orion’s bimodal IMF has to be searched for along that direction.” 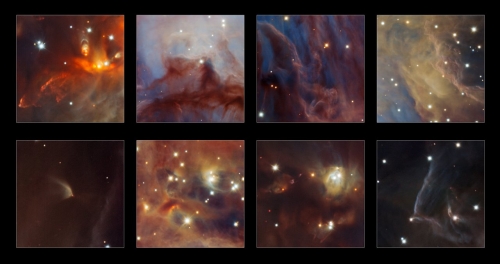 Image: Highlights from a new infrared image of the Orion Nebula. Credit: ESO.

Exactly how we define a brown dwarf is not yet a settled matter, as we saw in the discussion of WISE 0855 in yesterday’s post. One common definition places brown dwarfs between roughly 13 and 75 Jupiter masses, with smaller objects sometimes referred to as rogue planets or sub-brown dwarfs. The paper we looked at yesterday by Andrew Skemer et al. calls WISE 0855 a brown dwarf although it is about five Jupiter masses, evidently because it is thought to have evolved from a collapsing protostellar cloud rather than within a protoplanetary disk.

As we work out such definitions, we have a great deal to learn about objects throughout this mass range. The Orion Nebula is considered a benchmark for studying the Initial Mass Function of young star-forming regions and the substellar mass objects that also populate them. The HAWK-I instrument (High Acuity Wide-field K-band Imager) observes in the 0.9–2.5 μm near-infrared spectral range to see through dust to detect cooler stars and planets. The fact that we have numerous planet-sized objects showing up at the current observational limit raises hopes that the European Extremely Large Telescope and other ELTs slated for the 2020s will be able to mount an observing campaign targeting these and perhaps much smaller worlds.