When Nikolai Kardashev looked into the question of where to find advanced extraterrestrial civilizations, he argued that the obvious starting point would be in the vicinity of extreme astrophysics. Active galactic nuclei (AGN) come to mind, or even the centers of comparatively quiet galaxies like our own. Clément Vidal picked up the same point in his The Beginning and the End (Springer, 2014), arguing persuasively that we should consider how black holes could be used, perhaps by manipulating the merger of such objects. And yes, this is astroengineering utterly beyond our skills, but possibly not those of an advanced ETI.

Using black holes for energy is extreme, but Roger Penrose has imagined a super-civilization extracting black hole rotational energy by the injection of matter, and there are a number of other propositions on how such advanced engineering might work. Extracting energy from a black hole’s accretion disk might be the most efficient method, but lower-grade operations could exist around neutron stars. To that idea we might add, as Milan Ćirković does in the paper we looked at yesterday, the exploitation of X-ray binaries or quasars like SS433.

The new Ćirković paper homes in on gas giants and brown dwarfs, with the possibility of making either into a star. It’s an idea with a popular pedigree, the ignition of Jupiter having gone viral with the film 2010, but the real action is beyond the Solar System entirely. Consider that the number of substellar objects in interstellar space has been estimated to be as high as 105 times greater than the number of main sequence stars (see Island-Hopping to the Stars for more on this estimate and the kind of substellar objects it references). 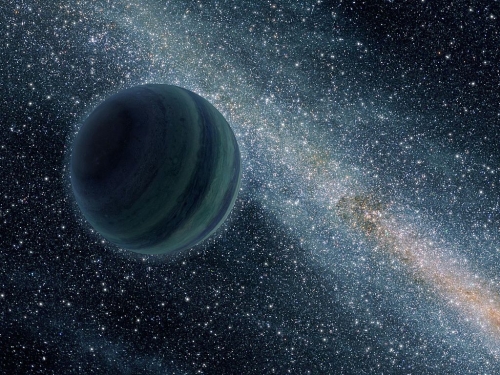 Could a technologically manipulated gas giant or brown dwarf be a SETI observable? Here we can look at several possibilities. The luminosity of a ‘stellified’ object should be greater than its mass would lead us to expect for natural objects. And, taking the long view, its luminosity should evolve differently from natural stars. Moreover, we might find anomalies in the spectra of such objects, especially early and late in their astronomically-brief lifetimes. And bear in mind that stellified objects would be bright power sources, unlike artificial orbital habitats or other large structures which would only reflect light or become apparent through their thermal emissions.

In other words, if such objects exist, they would be useful targets for Dysonian SETI investigation. Ćirković notes that determining the mass of a field star is a tricky proposition, and if we’re considering possible artifacts, we can’t just try to position the object on the Hertzsprung-Russell diagram as if it were a normal main sequence star. An accurate mass determination would require a multiple star system, and even here the measurement is fraught with uncertainties. But where we can determine it, mass is worth pursuing.

From the Ćirković paper, referring to Martyn Fogg’s 1989 paper on stellified gas giants:

The outliers from the low-mass stellar luminosity-mass relation deserve our best observational scrutiny, especially if the anomaly is extreme. In Fogg’s model, for instance, luminosity of [a] stellified Jupiter will fairly soon after the beginning of the process be ten orders of magnitude or so above the expected luminosity of such a low-mass free-floating object. If such artefacts are numerous in the Galaxy, their considerably easier detectability could deform and leave an imprint on the substellar mass function.

The evolution of luminosity in such objects would be challenging to gauge because of the timeframes involved — Fogg estimated a 50 million year span of exponentially increasing luminosity in the case of a stellified gas giant like Jupiter. As Ćirković notes, we could easily have such artifacts in our stellar catalogs now, for depending on their stage of stellification, they would simply mimic a particular type of star. We seem to be best off in hunting for stellified objects at the beginning and end of their lifetimes, looking for gamma and X-ray flares, for example, during the early stages of a planet’s transformation into a star.

Even so, we still are dealing with relatively transient phenomena compared to main sequence star lifetimes, and advanced technologies about which we can only speculate. Remember that the scenario Martyn Fogg originally came up with assumes using a small black hole, merging it with Jupiter in a carefully controlled orbit that eventually brings it toward the planet’s center. 100 million years of habitability are provided to the Jovian satellite system, but several hundred million years later, runaway accretion would have to be prevented. Ćirković comments:

For the initial phase, the period of unstable bursting and flaring can be shortened by sufficiently gently placing the mini-black hole into the substellar objects; for the final phase, duration and properties of instabilities depend on the manner of removing the excess mass from the black hole, as well as on the existing installation/swarm surrounding it. If such anomalies are observed in a planetary system containing at least one planet in the circumstellar habitable zone, this could be further incentive to give it high priority as a SETI target.

My take on all this is that as we are at the beginning of Dysonian SETI, we’re early in the process of developing the necessary parameters. Ćirković speaks to this point near the end of this paper, calling for improved quantitative models for the kind of astroengineering projects we can imagine and their possible SETI signatures. The advantage of stellified gas giants is that they are larger and simpler than many of the conjectured astroengineering projects that have been proposed, but we would want to have sound models for a wide range of possibilities.

And there’s the nub of the problem: We’d like to be able to observe an anomaly in our astronomical data and relate it swiftly to a potential technology, using what we believe to be its observables. But Dysonian SETI is built around the concept of abandoning anthropocentrism and simply observing. How does a Kardashev sub-Type I culture like ours envision what a Type II might do? Our conjectures invariably grow out of our preconceptions, and the models we build can only be crude templates. Rather than abandoning the process, we have to keep all this in mind, continually adjusting our assumptions while being alert for data that fit no previous niche.

The Ćirković paper is “Stellified Planets and Brown Dwarfs as Novel Dysonian SETI Signals,” in press at JBIS. I also referenced a Nikolai Kardashev paper above; it’s “On the inevitability and possible forms of supercivilizations”, in The Search for Extraterrestrial Life: Recent Developments, ed. M.D. Papagiannis, IAU, Dordrecht, pp.497-504, 1985.