Given that we have fewer than a dozen examples, highly variable stars like the recently discovered CX330 have much to teach us. These stars have been nicknamed FUors, after FU Orionis, a pre-main sequence star that has shown huge variations in magnitude over the past century. Eruptions like these may be common, as Alan Boss argued last year (see A Disruptive Pathway for Planet Formation), but as we learn more about them, we have to account for dramatic changes, as when the star V1057 Cyg increased in brightness by 5.5 magnitudes over the course of a few years. What does this do to an associated circumstellar disk?

As we ponder these questions, we also have to account for CX330, which comes into the news this week because of its odd isolation. Star-forming clouds packed with young stars are rich in gas and dust, and it is in these that we find all other examples in the FU Orionis category. But CX330 is a thousand light years away from the closest region of star formation, and because it is thought to be no more than a million years old, it’s hard to explain how it could have migrated from a star-forming region without losing much of the disk it now seems to be consuming.

In the YSO [Young Stellar Object] interpretation, the most interesting characteristic of CX330 is its position on the sky. It is 2◦ above the Galactic Plane, and well outside of any known star forming region. All known large magnitude outbursting YSOs such as FUors are located in star forming regions, likely in part because of selection biases but the actual distribution is also concentrated in these regions… Additionally, CX330 must have formed in situ, since its measured proper motion with the VVV survey has an upper limit of 3.3 mas [milliarcseconds] yr−1. The phase of stellar evolution in which disk instability events occur is generally thought to be within 106 years after the formation of the disk…so that it can have drifted less than a degree since the time of formation. 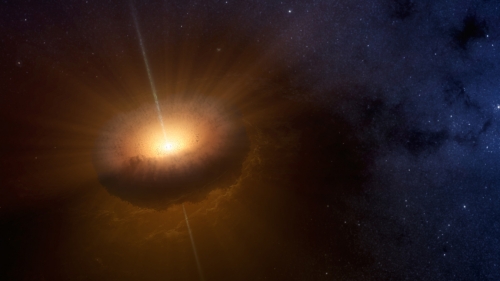 Image: This artist’s concept shows an unusual celestial object called CX330 that was first detected as a source of X-ray light in 2009 by NASA’s Chandra X-Ray Observatory while it was surveying the bulge in the central region of the Milky Way. A 2016 study in Monthly Notices of the Royal Astronomical Society found that CX330 is the most isolated young star that has been discovered. Researchers compared NASA’s Wide-field Infrared Survey Explorer (WISE) data from 2010 with NASA’s Spitzer Space Telescope data from 2007 to come to this conclusion. Credit: NASA/JPL-Caltech.

What we can say is that CX330, isolated as it is, is in the midst of an outbursting period that allowed its detection at X-ray wavelengths as well as visible light, with surveys like the above mentioned VVV (VISTA Variables in The Via Lactea) helping to measure its output. Infrared studies with data from the Wide-Field Infrared Survey Explorer (WISE) made it clear to Chris Britt (Texas Tech) that the object was associated with a large amount of warm dust that would have been heated in the outburst. From 2007 to 2010, according to WISE and Spitzer data, the star increased in brightness by several hundred times. CX330 appears more massive than known FU Orionis objects, with strong interactions with the gas and dust around it as material falls onto the star.

“CX330 is both more intense and more isolated than any of these young outbursting objects that we’ve ever seen,” said Joel Green, study co-author and researcher at the Space Telescope Science Institute in Baltimore. “This could be the tip of the iceberg — these objects may be everywhere.”

Which leads me back to Alan Boss’ 2015 paper. In it, Boss (Carnegie Institution for Science) modeled interactions between protoplanetary disks and their stars, studying in particular periods of gravitational instability in the disk that can scatter larger objects (1 to 10 meters) away from the star. What we wind up with is a star that consumes about half the gaseous disk mass but allows these larger objects to grow into planetesimals. Thus we have a mechanism for planet formation despite infalling gas and violent upheavals in the star’s accretion disk.

If outbursts like these are relatively short in astronomical terms, we wouldn’t have observed many of them, and Joel Green’s comment could be right on target. In fact, we may learn that most or all stars go through periods of violent development in their youth. This would follow a hierarchical model of star development in which a surrounding gas cloud reaches a critical density and begins to collapse onto the young star. The paper argues that this may explain stars like CX330:

Hierarchical SF [star formation] posits that stars form in a fractal distribution on a smoothly varying range of scales dominated by turbulence rather than magnetic support… There is evidence of hierarchical SF as a result of supernovae shocks…and in at least one association of massive stars in a larger SF region… If star formation proceeds in a fractal distribution of scales, some few stars should be observed to form even in total isolation from the cloud complexes which have been the focus of large star formation studies.

In any case, the effect of outbursts from young stars could be a vital element in planet formation. Finding more stars in the FU Orionis class would be useful, particularly since no FU Orionis star has ever been observed closing down from the high luminosity phase. We’re dealing with a short period in a star’s evolution but one that holds clues to the growth of planetary systems.