A large part of the fascination of astronomy is the discovery of objects that don’t fit our standard definitions. KIC 8462852 — ‘Tabby’s Star’ — is deeply mysterious and high on my watchlist. But yesterday we also looked at CX330, a so-called FUor of the kind that brightens enormously over years of observation. Today we have another strange one, a system called AR Scorpii, where a white dwarf star in a binary system is releasing a blast of radiation onto a nearby red dwarf. The entire system brightens and fades every 1.97 minutes, a phenomenon that has only recently been properly understood.

“AR Scorpii was discovered over 40 years ago, but its true nature was not suspected until we started observing it in June 2015,” says Tom Marsh (University of Warwick), lead author of the paper on this work. “We realised we were seeing something extraordinary the more we progressed with our observations.”

Those observations proceeded with data from the European Southern Observatory’s Very Large Telescope (Chile) and the Isaac Newton Group of telescopes at La Palma (Canary Islands), along with other ground-based resources and the Hubble and Swift instruments in space. European amateur astronomers also played a key role in studying the star’s behavior.

AR Scorpii is about 380 light years from Earth. Its white dwarf component is roughly Earth-sized though containing 200,000 times the mass, and the associated red dwarf is about one-third the mass of the Sun. This is a tight system, with the two objects orbiting one another every 3.6 hours. What researchers have found is that the white dwarf is accelerating electrons almost to the speed of light in a beam that sweeps across the face of the M-dwarf. The brightening is dramatic, but the emissions range all the way from X-rays to radio wavelengths. 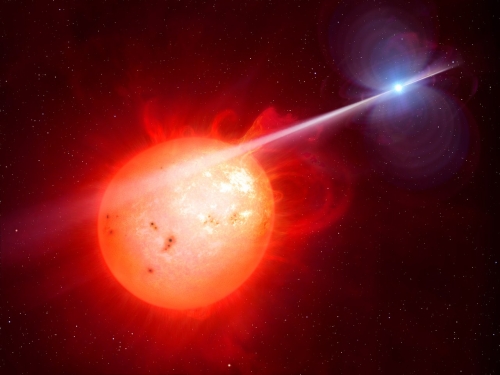 Image: This artist’s impression shows the strange object AR Scorpii. In this unique double star a rapidly spinning white dwarf star (right) powers electrons up to almost the speed of light. These high energy particles release blasts of radiation that lash the companion red dwarf star (left) and cause the entire system to pulse dramatically every 1.97 minutes with radiation ranging from the ultraviolet to radio. Credit: M. Garlick/University of Warwick, ESA/Hubble.

AR Scorpii was classified in the 1970s as a Delta Scuti variable, a kind of star (also known as a dwarf cepheid) that shows luminosity variations due to pulsations on the star’s surface. Such variables are useful as standard candles that help astronomers calculate stellar distances. But Marsh and team discovered that AR Scorpii’s pulsations were not the result of a single variable star but a binary system in which intense brightness variations were occurring. The pulses are strong enough that the star’s optical flux can increase by a factor of four within 30 seconds.

The nature of the AR Scorpii pulses is what intrigues the researchers. From the paper:

Isolated white dwarfs emit most of their power from ultraviolet to near-infrared wavelengths, but when in close orbits with less dense stars, white dwarfs can strip material from their companions, and the resulting mass transfer can generate atomic line and X-ray emission, as well as near- and mid-infrared radiation if the white dwarf is magnetic. However, even in binaries, white dwarfs are rarely detected at far-infrared or radio frequencies.

The team’s calculations show that the 1.97 minute brightness pulsations reflect the spin of a magnetic white dwarf, one that is slowing down on a timescale of 107 years.

Although the pulsations are driven by the white dwarf’s spin, they originate in large part from the cool star. AR Sco’s broad-band spectrum is characteristic of synchrotron radiation, requiring relativistic electrons. These must either originate from near the white dwarf or be generated in situ at the M star through direct interaction with the white dwarf’s magnetosphere.

Synchrotron radiation involves the acceleration of charged particles in a magnetic field, but as the quote above shows, what the researchers don’t yet know is the source of the electrons. The kind of pulsations observed here have been seen before in neutron stars but AR Scorpii is the first white dwarf system to show similar behavior. The paper notes that white dwarfs and neutron stars are the only two types of object that can support a misaligned magnetic dipole and spin fast enough to match the observed pulsations. The paper goes to some length to demonstrate that the AR Scorpii pulsations are consistent only with a white dwarf and not a neutron star.