Antimatter Propulsion: Birth of a Concept

I spent this past weekend poking into antimatter propulsion concepts and in particular looking back at how the idea developed. Two scientists — Les Shepherd and Eugen Sänger — immediately came to mind. I don’t know when Sänger, an Austrian rocket designer who did most of his work in Germany, conceived the idea he would refer to as a ‘photon rocket,’ but he was writing about it by the early 1950s, just as Shepherd was discussing interstellar flight in the pages of the Journal of the British Interplanetary Society. A few thoughts: 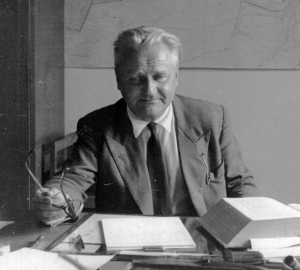 Sänger talked about antimatter propulsion at the 4th International Astronautical Congress, which took place in Zurich in 1953. I don’t have a copy of this presentation, though I know it’s available in a book called Space-Flight Problems (1953), which was published by the Swiss Astronautical Society and bills itself as a complete collection of all the lectures delivered that year in Zurich. If you like to track ideas as much as I do, you’ll possibly be interested in an English-language popularization of the idea in a 1965 book from McGraw Hill, Space Flight: Countdown for the Future, which Sänger wrote and Karl Frucht translated.

Sänger must have been dazzled by this ultimate specific impulse, which he conceived possible only through the mutual annihilation of matter with antimatter. But recall that when Sänger was developing these ideas, the only form of antimatter known was the positron, or positively charged electron, which had been discovered by Carl Anderson in 1932 (he would win the Nobel for the work in 1936). When you bring positrons and electrons together, you produce gamma rays, an energetic form of electromagnetic radiation that moves at the speed of light.

Antimatter propulsion solved? Hardly. What the Sänger photon rocket had to do was to create a beam of gamma rays which could be channeled into an exhaust, somehow overcoming the problem that the gamma rays produced by the matter/antimatter annihilation emerge in random directions. They are highly energetic and would penetrate all known materials, a lethal problem for the crew and a showstopper for directed thrust unless Sänger could develop a kind of ‘electron-gas mirror’ to direct the gamma rays. Sänger never solved this problem. 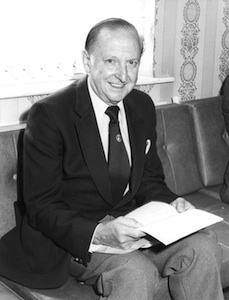 Writing in 1952, Les Shepherd went to work on antimatter equally limited by the fact that only the positron was then known — the antiproton would not be confirmed until 1955 (by Emilio Segrè and Owen Chamberlain — Nobel in 1959). Shepherd was a nuclear fission specialist who helped to found the International Academy of Astronautics and served as president of the International Astronautical Federation (see my obituary for Shepherd from 2012 for more). And his 1952 paper “Interstellar Flight” remains a landmark in the field.

Even without the antiproton, Shepherd would have known about Paul Dirac’s prediction of its existence and doubtless speculated on the possibilities it might afford. As Giovanni Vulpetti told me just after Shepherd’s death:

Dr. Shepherd realized that the matter-antimatter annihilation might have the capability to give a spaceship a high enough speed to reach nearby stars. In other words, the concept of interstellar flight (by/for human beings) may go out from pure fantasy and (slowly) come into Science, simply because the Laws of Physics would, in principle, allow it! This fundamental concept of Astronautics was accepted by investigators in the subsequent three decades, and extended/generalized just before the end of the 2nd millennium.

Vulpetti himself has been a major figure in that extension of the concept, with papers like “Maximum terminal velocity of relativistic rocket” (Acta Astronautica, Vol. 12, No. 2, 1985, pp. 81-90); and “Antimatter Propulsion for Space Exploration” (JBIS Vol. 39, 1986, pp. 391-409). Many back issues of JBIS are available for a fee on the journal’s website (http://www.jbis.org.uk/), though I haven’t yet checked for this one. But be aware that Dr. Vulpetti is also making his papers available on his website (http://www.giovannivulpetti.eu/).

Looking back at Shepherd’s “Interstellar Flight” paper is a fascinating exercise. Assuming that we could solve the Sänger problem, Shepherd saw that there were other issues that made antimatter extremely problematic. Obviously, producing antimatter in the necessary amounts would be a factor, as would the key problem of storing it safely, but Shepherd had something else in mind when he wrote “The most serious factor restricting journeys to the stars, indeed, is not likely to be the limitation on velocity but rather limitation on acceleration.”

The paper then moves to examine what happens as we unleash the power of matter/antimatter annihilation. Have a look at this:

We see that a photon rocket accelerating at 1 g would require to dissipate power in the exhaust beam at the fantastic rate of 3 million Megawatts/tonne. If we suppose that the photons take the form of black-body radiation and that there is 1 sq metre of radiating surface available per tonne of vehicle mass then we can obtain the necessary surface temperature from the Stefan-Boltzmann law…

The result is an emitting surface that would reach temperatures of about 100,000 K. We need, in other words, to dispose of waste heat in the form of thermal radiation. Even assuming a way of channeling the gamma rays of positron/electron annihilation (or looking ahead to other forms of antimatter and their uses), Shepherd could see that accelerations high enough to shorten interstellar flight times drastically would have to solve the thermal dissipation problem.

The real difficulty, always assuming that we can find suitable energy sources for the job, lies in the unfavourable ratio of power dissipation to acceleration as soon as we become involved with high relative velocities. The problem is fundamental to any form of propulsion which involves non-conservative forces (e.g., the thrust of a rocket jet) to produce the necessary acceleration. The only method of acceleration which one can conceive that would not be subject to this difficulty, would be that caused by an external field of force.

So can we produce radiators that can handle temperatures of 100,000 K? Perhaps there are ways, but Shepherd could only note that the matter was so far beyond existing technologies as to make the speculation pointless. Sänger’s photon rocket — or any vehicle somehow creating an exhaust velocity near the speed of light, has to reckon with the radiator problem.

Remarkably ahead of their time, both Les Shepherd and Eugen Sänger helped define the problems of antimatter propulsion even before we had found the antiproton, a form of antimatter that offers new possibilities that would be explored by Robert Forward and many others. But more on that tomorrow.

The Sänger references are given above. Les Shepherd’s ground-breaking paper on interstellar propulsion is “Interstellar Flight,” JBIS, Vol. 11, 149-167, July 1952. For more background on this issue, see Adam Crowl’s Re-thinking the Antimatter Rocket, published here in 2012.