The Evolution of Antimatter Propulsion

Thinking about Eugen Sänger’s photon rocket concept inevitably calls to mind his Silbervogel design. The ‘Silverbird’ had nothing to do with antimatter but was a demonstration of the immense imaginative power of this man, who envisioned a bomber that would be launched by a rocket-powered sled into a sub-orbital trajectory. There it would skip off the upper atmosphere enroute to its target. The Silbervogel project was cancelled by the German government in 1942, but if you want to see a vividly realized alternate world where it flew, have a look at Allen Steele’s 2014 novel V-S Day, a page-turner if there ever was one.

I almost said that it was a shame we don’t have a fictionalized version of the photon rocket, but as we saw yesterday, there were powerful reasons why the design wouldn’t work, even if we could somehow ramp up antimatter production to fantastic levels (by today’s standards) and store and manipulate it efficiently. Energetic gamma rays could not be directed into an exhaust stream by the kind of ‘electron gas mirror’ that Sänger envisioned, although antimatter itself maintained its hold on generations of science fiction writers and scientists alike.

Sänger’s presentation at the International Astronautical Congress in 1953 came just two years ahead of the confirmation of the antiproton, first observed at the Berkeley Bevatron in 1955. Now we have something we can work with, at least theoretically. For unlike the annihilation of electrons and positrons, antiprotons and protons produce pi-mesons, or pions, when they meet. Pions don’t live long, with charged pions decaying into muons and muon neutrinos, while neutral pions decay into gamma rays. Those charged pions, however, turn out to be helpful indeed.

By the early 1980s, Robert Forward had realized that superconducting coils could be used to channel such charged pions, producing the kind of directed exhaust stream that so frustrated Sänger. Forward described the ‘magnetic nozzle’ in his book Mirror Matter (Wiley, 1988), but his first paper on the subject appeared in 1982, along with other papers on antimatter propulsion from Brice Cassenti and David Morgan, all of these in the fecund pages of the Journal of the British Interplanetary Society. Morgan (Lawrence Livermore National Laboratory) envisioned a three-meter nozzle using magnetic coils to channel charged pions, with an exhaust velocity fully 94 percent of the speed of light.

The gamma ray problem is still there, but in these designs, they appear in the exhaust well behind the rocket, even as the energy of the charged pions is used to heat a propellant like hydrogen or water which becomes the exhaust. Using methods like these, we could extract up to 50 percent of the energy unlocked by the annihilation of protons and antiprotons.

In broader terms, what Forward was proposing was to replace tons of chemical propellant with milligrams of matter. In a study he performed for the Air Force Rocket Propulsion Laboratory, he advocated the creation of facilities specifically dedicated to producing antimatter, as opposed to relying on the production of antimatter in particle accelerators as a by-product of other work. In this way, he believed, the cost could be brought down to about $10 million per milligram. Remember that a milligram of antimatter produces about the same energy as 20 tons of chemical fuel, making antimatter at this price level a better deal than chemical propulsion.

We’re not at Sänger-esque levels of specific impulse (3 X 107 seconds), but Giovanni Vulpetti was able to show later in the 1980s that a rocket working with the pions of proton/antiproton annihilation was capable of a specific impulse of 0.58c. Even so, antimatter’s numerous problems continue to bedevil us. Some of Robert Frisbee’s work in the same decade overcomes the antimatter storage issue by creating spacecraft thousands of kilometers long. These fantastic designs are rapier-thin and massive, hardly the sleek starships most science fiction has led us to expect, unless we look into SF’s most extravagant imaginings. 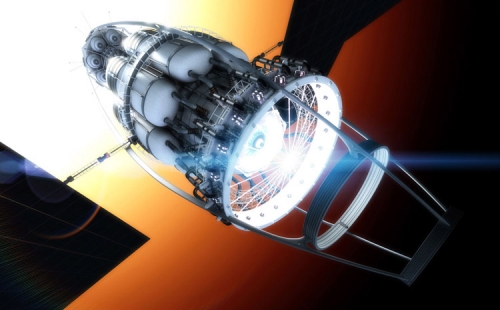 Image: Here’s one way of getting around those huge Frisbee rockets. This is Richard Obousy’s concept for VARIES, the Vacuum to Antimatter Rocket Interstellar Explorer System. Here the starship uses an immensely powerful laser to generate its own antimatter fuel, relying on Julian Schwinger’s work showing that electron-positron pairs can be generated out of the vacuum of space itself. Credit: Adrian Mann.

Excuse the digression, but Frisbee’s work calls up the memory of one of Paul Linebarger’s stranger stories. Writing as Cordwainer Smith, Linebarger created a short fable called “Golden the Ship Was – Oh! Oh! Oh!,” which ran in Amazing Stories in April of 1959. And just as Frisbee’s vast designs stretch physics to the limit by way of showing how unlikely an antimatter starship is at our current level of understanding, Linebarger’s golden ship is in most ways a chimera, although the powers threatening the Earth do not understand what they are seeing:

“That one ship is ninety million miles long, Your Highness. It shimmers like fire, but moves so fast that we cannot approach it. But it came into the center of our fleet almost touching our ships, stayed there twenty or thirty thousandths of a second. There it was, we thought. We saw the evidence of life on board: light beams waved: they examined us and then, of course, it lapsed back into nonspace. Ninety million miles, Your Highness. Old Earth has some stings yet and we do not know what the ship is doing.”

The pleasures of Cordwainer Smith are likewise vast and I won’t give anything more away about this short tale (you can find it reprinted in The Rediscovery of Man (NESFA Press, 1993). But back to proton/antiproton annihilation, which gets an interesting new wrinkle in the work of Friedwardt Winterberg. As examined in these pages by Adam Crowl (see Re-Thinking the Antimatter Rocket), Winterberg looks at how a plasma made of matter and antimatter in equal parts (an ‘ambiplasma’) can undergo extreme compression. Let me quote Crowl:

Essentially what Winterberg describes is generating a very high electron-positron current in the ambiplasma, while leaving the protons-antiprotons with a low energy. This high current generates a magnetic field that constricts rapidly, a so-called pinch discharge, but because it is a matter-antimatter mix it can collapse to a much denser state. Near nuclear densities can be achieved, assuming near-term technical advancements to currents of 170 kA and electron-positron energies of 1 GeV.

What we get is a gamma ray flux that is highly directional, forming a gamma-ray laser, a beam of gamma rays that, in conjunction with the annihilation chamber’s magnetic fields, produces thrust. The work draws on Winterberg’s thinking on deuterium fusion rockets (he was a key contributor to the original Project Daedalus starship design) and the magnetic compression of ions. Here we get a concept that would surely have delighted Eugen Sänger, as it provides for a highly directional gamma ray thrust that was the cornerstone of the photon rocket.

All these concepts assume substantial production of antimatter and major breakthroughs in storage, but in the nearer term, we will continue to explore antimatter’s possibilities in catalyzing nuclear fusion reactions, or intriguing spacecraft designs like Steven Howe’s ‘antimatter sail.’ In Howe’s work for NASA’s original Institute for Advanced Concepts, small amounts of antimatter are used to create fission as they encounter a sail impregnated with uranium. For more, see An Antimatter Driven Sail to the Kuiper Belt.

As we learn more about storage, and in particular methods involving stable antihydrogen (a positron and an antiproton), we can hope that methods of antimatter production, and even antimatter collection in the outer Solar System, will become better understood. It will take experimentation with tiny amounts of antimatter to help us understand its possible contribution to deep space exploration.