Talking about antimatter, as we’ve done in the past two posts, leads to the question of why the stuff is so hard to find. When we make it on Earth, we do so by smashing protons into targets inside particle accelerators of the kind found at the Fermi National Accelerator Laboratory in Batavia, IL and CERN (the European Organization for Nuclear Research). It’s not exactly an efficient process from the antimatter production standpoint, as it produces a zoo of particles, anti-particles, x-rays and gamma rays, but it does give us enough antimatter to study.

But there is another way to find antimatter, for it occurs naturally in the outer Solar System and even closer to home. James Bickford (Draper Laboratory, Cambridge MA) has looked at how we might trap antimatter that occurs in the Earth’s radiation belts. In a report for NIAC back in 2006 (available here), Bickford laid out a strategy for using high temperature superconductors to form two pairs of RF coils with a radius of 100 meters, to be powered by nuclear or solar power. The idea is that the magnetic field created through the RF coils will concentrate and trap the incoming antiproton stream.

Now the model changes from production on Earth to harvesting natural antimatter in space. We get antimatter in the Solar System because high-energy galactic cosmic rays (GCR) bombard the upper atmosphere of the planets, causing ‘pair production,’ which is the creation of an elementary particle and its antiparticle. The kinetic energy of the cosmic ray particle is converted into mass when it collides with another particle. According to Bickford’s calculations, about a kilogram of antiprotons enter our Solar System every second, and any planet with a strong magnetic field is fair game for collection.

As the planet’s magnetic field holds the antimatter particles, they spiral along the magnetic field lines. This is a process that continually replenishes itself both for matter and antimatter. Jupiter is a source, but Saturn is even better, for a larger flux enters its atmosphere. Saturn is, in fact, the place where the largest total supply of antiprotons appears, with reactions in its rings injecting 250 micrograms per year into the planet’s magnetosphere. But we can start with the Earth, for the antimatter production process was confirmed here in 2011.

These results came from the PAMELA (Payload for Antimatter/Matter Exploration and Light-nuclei Astrophysics) satellite, a joint mission among scientists from Italy, Germany, Russia, and Sweden (see Antimatter Source Near the Earth). The most abundant source of antiprotons near us is found to be in a thin belt that extends from a few hundred to about 2000 kilometers above Earth, moving along Earth’s magnetic field lines and bouncing between the north and south magnetic poles. 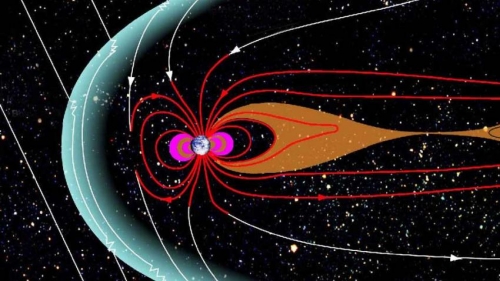 Image: An antimatter reservoir near our planet in the form of a belt of antiprotons that lies within the innermost portion (pink) of Earth’s magnetosphere, the large bubble-like region interior to the blue arc that is controlled by the planet’s magnetic field. Credit: Aaron Kaase/NASA GSFC.

Compared to harvesting antimatter on Earth, space harvesting is five orders of magnitude more cost effective, and Bickford’s report suggests we could be collecting 25 nanograms of antimatter per day near our planet. And here’s a spectacular mission concept that can grow out of this, also drawn from the Bickford report:

The baseline concept of operations calls for a magnetic scoop to be placed in a low-inclination orbit, which cuts through the heart of the inner radiation belt where most antiprotons are trapped. Placing the vehicle in an orbit with an apogee of 3500 km and a perigee of 1500 km will enable it to intersect nearly the entire flux of the Earth’s antiproton belt. The baseline mission calls for a fraction of the total supply to be trapped over a period of days to weeks and then used to propel the vehicle to Saturn or other solar system body where there is a more plentiful supply. The vehicle then fully fills its antiproton trap and propels itself on a mission outside of our solar system.

We can imagine fuel depots in the Solar System that could support our growing infrastructure with missions to Mars and the asteroids. There is even the possibility, tantalizingly referenced in the report, of using the galactic cosmic ray flux enroute to a destination to further bulk up the fuel supply. It’s bracing stuff, and a reminder that when we talk about gathering antimatter for a mission, we aren’t necessarily limited to the sparse production from today’s colliders.

But back to the original question. Why is antimatter so hard to find? If it is truly ‘mirror matter,’ as the title of Robert Forward’s book suggests, shouldn’t there be equal amounts of it, and shouldn’t that equality have prevailed from the beginning of the universe? It seems logical to think so, but of course if that had occurred, we would not be here to contemplate the problem.

Now we’re entering the realm of charge-parity (CP) symmetry, which asserts that physics should be unchanged if we plug in antiparticles where particles currently are. Most particle interactions show this charge-parity symmetry to hold, and it carries the implication that the universe should have begun with equal amounts of matter and antimatter. Why and where CP symmetry does fail is a serious question, one that has us looking for any observable violation of the principle.

We have no definitive answer, but we do have interesting results from the T2K experiment in Japan, as reported in New Scientist following their discussion at Neutrino 2016 (the XXVII International Conference on Neutrino Physics and Astrophysics), held in London in early July. The researchers at T2K have been monitoring the oscillations that occur when neutrinos spontaneously change ‘flavors’, from electron to muon to tau. Neutrinos as well as antineutrinos each come in these three types, and all three types can undergo such oscillations. 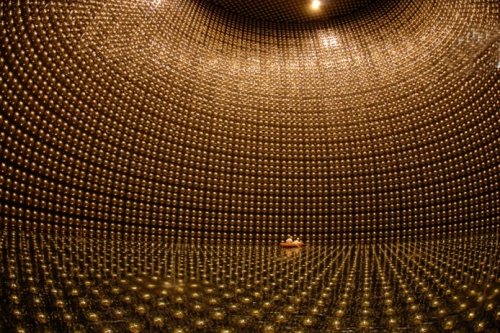 Image: The inside of the Super-Kamiokande detector in Japan. Credit: T2K.

Observing that 32 muon neutrinos that traveled between the J-PARC accelerator in Tokai to the Super-Kamiokande neutrino detector in Kamioka had turned into electron neutrinos, the team ran the same experiment with muon antineutrinos. Charge-parity symmetry says that the rates of change should be the same, but the researchers report just four muon antineutrinos have changed into the anti-electron neutrino. The numbers are small but the possible violation of CP symmetry is provocative. Results from NoVA, a similar experiment sending neutrinos between Illinois and Minnesota, are showing roughly similar values for apparent CP violation.

More data are needed to reach any firm conclusions, but these results point to the direction of future work at both installations. Some process that violates CP symmetry has to be in place to explain the overwhelming difference between the amount of matter and antimatter in the universe. Thus we can expect any results showing deviations from this symmetry will make news. Meanwhile, from a propulsion standpoint, we have to reckon with the paucity of antimatter by imagining creative ways of creating or finding enough to use in our future experiments. Space-based antimatter harvesting may prove to be the most cost effective way to proceed.

I’ll close by quoting James Bickford in a 2014 interview, where I think he strikes just the right note about the need for small scale experiments as well as avoiding antimatter hype:

For the most part, propelling spacecraft to near the speed of light with antimatter lives in the realm of Star Trek. The technical obstacles are non-trivial and probably won’t be solved in the near future, if ever. From this perspective, the potential for antimatter probably has been overhyped. However, the small scale experiments are just the first baby steps that could help us down the long path. More importantly, research and development in this area is part of a broader framework that could help fundamental science and our understanding of the universe. Antimatter plays a central role in some of the Holy Grail problems of physics, such as the nature of dark matter and why matter dominates over antimatter.