Brown dwarfs offer exciting prospects for exoplanet work. Not only are we learning that they can have planets of their own, but brown dwarfs themselves are a useful bridge between planets and stars. We also know that there are a lot of them out there. According to data from the WISE (Wide-field Infrared Survey Explorer) mission, there is about one brown dwarf for every six main sequence stars. That’s plenty of brown dwarfs, but it actually represents a reduction in estimates, which once went as high as a brown dwarf for every star.

Moreover, WISE could identify about 200 brown dwarfs relatively near the Sun, with 33 within 26 light years. 211 stars are found in that same volume, incidentally. If we extrapolate this out to the galaxy at large, we should have about 33 billion brown dwarfs, assuming a galactic total of 200 billion stars. These numbers have a certain flexibility in them, especially given how hard it can be to track the coolest Y-dwarfs. Added to this is the fact that brown dwarfs fade with time.

Once we get below about 75 Jupiter masses, an object cannot ignite hydrogen fusion. That has broad implications for how brown dwarfs evolve. After formation, they continually cool and contract with time, with a concomitant increase in surface gravity. Thus across the age range we find brown dwarfs in heat regimes not that dissimilar from a small star, while others are as cool as a planet. Brown dwarf contraction in this mass range is opposed by electron degeneracy, so despite gradual constriction, the object never reaches the temperature for nuclear fusion. 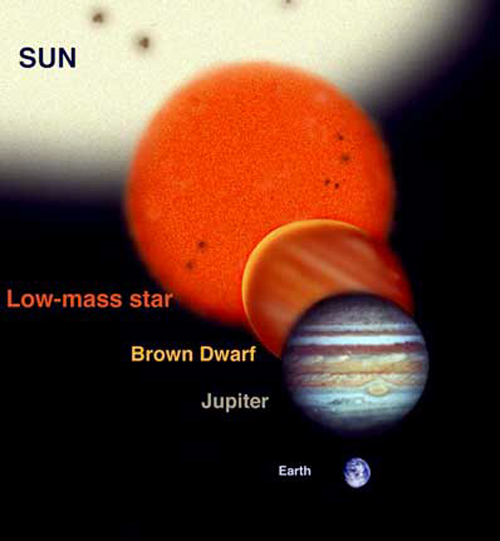 What we do get is a significant bridge between stars and planets. In a new paper, Jacqueline Faherty (Carnegie Institution for Science) and colleagues analyze the properties of 152 suspected young brown dwarfs, objects that show tremendous diversity in mass, age and chemical composition. Finding where many of the brown dwarfs formed allowed the team to eliminate age and chemical composition as the primary cause of their differences.

Faherty’s kinematic study adds new radial velocities, proper motions and parallaxes for a number of these objects, finding 39 brown dwarfs that appear to be members of nearby moving groups, indicating similar age. Another 92 objects are considered ‘ambiguous members,’ while 21 belong to no moving group. Using the moving group membership as an age calibration, the paper looks at the wide range of color and spectral features, making the case that atmospheric conditions are responsible for many of the observed differences between brown dwarfs.

Objects with masses <∼ 75 MJup cool through their lives with spectral energy distributions evolving as their atmospheric chemistry changes with decreasing temperatures…At the warmest temperatures, the atmosphere is too hot for the condensation of solids…But as the Teff [effective temperature] falls below 2500 K, both liquid (e.g. Fe) and solid (e.g. CaTiO3, VO) mineral and metal condensates settle into discrete cloud layers…

It’s a process that will continue to affect our observations:

As temperatures cool further, cloud layers form at such deep levels in the photosphere that they have little or no impact on the emergent spectrum. This transition between “cloudy” to “cloudless” objects occurs rapidly over a narrow temperature range (1200-1400 K, corresponding to the transition between L-type and T-type spectra) and drives extreme photometric, spectroscopic, and luminosity changes.

Faherty considers young brown dwarfs like these to be siblings of the giant exoplanets we have seen through direct imaging, which means that quantifying their observable properties should help us better understand how young gas giant planets evolve. In many ways we can consider them exoplanet analogs, but exoplanets without the distracting light of their host star. We can study young, warm exoplanets for evidence of the same kind of atmosphere-related changes.

The overlap between brown dwarfs and planets is striking, offering fertile ground for further work:

In general, M, L, T, and Y classifications identify brown dwarfs. If the source is older (> 2 – 3 Gyr), late-type M and early L dwarfs are stars. But if the source is young (< 1 Gyr), even those warmer classifications will describe an object that is < 75 MJup. To date, all directly imaged giant exoplanets have observable properties which lead to their classification squarely in this well-studied regime. Planetary mass companions such as 2M1207 b, 51 Eri b, β Pictoris b, ROXs 42B b, and the giant planets orbiting HR8799, have observables that are similar to L or T brown dwarfs…Furthermore, there exists a population of “classical” brown dwarfs that overlap in effective temperature, age – many in the same moving group – and mass with directly observed planetary mass companions (e.g. PSO 318, SDSS1110, 0047+6803…

These early cuts at deep classification of brown dwarfs are obviously going to get even deeper as we accumulate more data, but the analysis by moving groups offers us a useful way to frame the issue. Pondering Faherty’s work on my morning walk (in an already sweltering 90° F), I found myself recalling an interesting analysis of brown dwarf atmospheres from a few years back. A bit of poking around on the Net later confirmed that this was a study of the brown dwarf ULAS J222711-004547. The work, by Frederico Marocco (University of Hertfordshire) and team, analyzed clouds of mineral dust, all floating in an atmosphere of water vapor, methane and (possibly) ammonia.

ULAS J222711-004547 turns out to be one of the reddest brown dwarfs we’ve ever found. Marocco’s paper refers to it as ‘a peculiar L dwarf,’ and identifies nine other objects in the same category. The researchers consider these unusually red L-dwarfs to be a bridge between brown dwarfs and giant planets atmospheres, thus a useful test bed for the atmospheric models that Faherty so painstakingly analyzes in her later work. In such ways does the analysis of dust clouds in brown dwarfs add insight into our models of young exoplanet atmospheres.

The paper is Faherty et al., “Population Properties of Brown Dwarf Analogs to Exoplanets,” accepted for publication in the Astrophysical Journal Supplement Series (preprint). The Marocco paper is “The extremely red L dwarf ULAS J222711−004547 – dominated by dust,” Monthly Notices of the Royal Astronomical Society, published online February 5, 2014 (full text). I wrote about this one back in 2014 in Unusually Red Brown Dwarfs (and What They Tell Us).