Most readers will recall the Spacecoach, developed by Brian McConnell and Alex Tolley and widely discussed in these pages. A workhorse spacecraft designed to shuttle crew and cargo between Earth and nearby planets, the Spacecoach was presented as a way to open up regular commercial use of the Solar System, on the pattern of the stagecoaches that connected towns in the American Old West. One of the many beauties of the Spacecoach was the idea of using reclaimed water and waste gases as a propellant in its electric engines.

With water as a propellant, the mass of the system can be sharply reduced, with an associated reduction in mission costs. Benefits like that don’t stay hidden for long, and I see that Deep Space Industries is likewise attracted to water in the design of its new engine. The Prospector-1 spacecraft, slated for launch by the end of the decade, uses a system DSI calls ‘Comet.’ It expels superheated water to create thrust, a useful idea given the company’s intentions.

“During the next decade, we will begin the harvest of space resources from asteroids,” said Daniel Faber, CEO at Deep Space Industries. “We are changing the paradigm of business operations in space, from one where our customers carry everything with them, to one in which the supplies they need are waiting for them when they get there.”

And as Faber’s news release is quick to point out, water will be early on the list of asteroid mining products, meaning that the company realizes the importance of refueling in space. Prospector-1 is being developed as the world’s first commercial interplanetary mining mission, designed to rendezvous with a near-Earth asteroid and evaluate its potential for mining operations. The plan is to key off the earlier Prospector-X mission, which will test DSI technologies in low-Earth orbit as a precursor to the more ambitious Prospector-1. 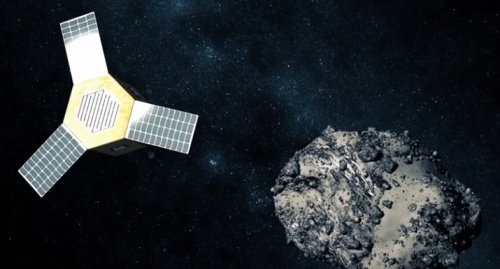 We’ve had good views of asteroids from a number of missions now, including Galileo, Hayabusa, which landed on the asteroid Itokawa and returned samples to Earth, NEAR-Shoemaker, Deep Space 1 and, of course, Dawn, which continues to provide us with high quality data from Ceres after its long period of operations at Vesta. The list could be extended, for as you can see above, many missions, like Galileo and Cassini, imaged asteroids on their way to their final destinations. It was Jupiter-bound Galileo that discovered that the asteroid Ida had a small satellite (Dactyl). Galileo also imaged the asteroid Gaspra.

Prospector-1’s asteroid is to be chosen from the host of near-Earth asteroids, with mapping operations of its surface and subsurface, visual and infrared imaging and analysis of water content down to a depth of one meter. After the initial science campaign, Prospector-1 will use its water thrusters to make a touchdown on the asteroid for further analysis. “The ability to locate, travel to, and analyze potentially rich supplies of space resources is critical to our plans,” continued Faber. “This means not just looking at the target, but actually making contact.”

In Living Off the Land in Space (Copernicus, 2007), Gregory Matloff, Les Johnson and C Bangs looked at asteroid mining as one possibility in a program of long-term human migration off our planet. The authors drew particular attention to the asteroid 2001 CQ36, a near-Earth object with a diameter estimated to be between 90 and 300 meters. 2001 CQ36 might be an excellent asteroid for an early look by a space mining company, given not only its resource potential but the fact that it is on an orbit that could potentially cause problems.

The asteroid approaches the Earth in 2021, 2022, 2031 and 2033, with the 2031 pass closing to 0.02 AU. Assuming a diameter of 150 meters, Matloff, Johnson and Bangs work out an estimated mass of 3 billion kilograms (this also assumes a spherical shape and a specific gravity intermediate between water and rock). 2001 CQ36 is not the sort of thing we want to see impact the Earth, which makes close study of its composition a long-term insurance policy, just in case we ever have to consider nudging an asteroid like this onto a new trajectory.

From the mining perspective, get just a third of the resources available at 2001 CQ36 and you’ve got a billion kilograms of material for space manufacturing. So doubling up on our objectives would seem to make sense when we have objects that can be studied and exploited from both perspectives. Prospector-1 is small (50 kg when fueled) and low cost, intended as a platform for early asteroid mining studies and other forms of inner system exploration. We’ll track its fortunes closely.