Getting Ready for OSIRIS-REx

Back in the 1930s, the German astronomer Karl Reinmuth discovered a near-Earth asteroid now called 1862 Apollo, which gave its name to the Apollo asteroids, all of them Earth-crossing and of high interest to those looking to plan asteroid missions. The number of known Apollo asteroids totals close to 7000. The one that gains our attention today is 101955 Bennu, for this is the target of the upcoming OSIRIS-REx mission, scheduled for launch on September 8.

Standing for Origins, Spectral Interpretation, Resource Identification, Security-Regolith Explorer, OSIRIS-REx is a sample return mission that will, if all goes well, reach Bennu in 2018, surveying the asteroid from nearby space for 505 days in search of optimum sampling sites. The plan is for no actual landing but a very close approach in which the spacecraft’s extended robotic arm will attempt to gather the sample. The robotic arm (known as TAGSAM, for Touch-And-Go Sample Acquisition Mechanism) will collect between 60 and 2,000 grams of surface material. 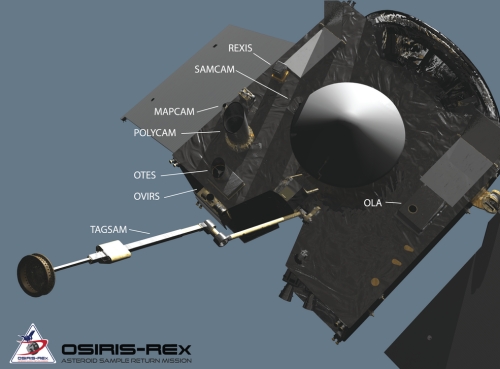 Image: The Origins, Spectral Interpretation, Resource Identification, Security-Regolith Explorer (OSIRIS-REx) spacecraft will travel to a near-Earth asteroid, called Bennu (formerly 1999 RQ36), and bring at least a 60-gram sample back to Earth for study. The mission will help scientists investigate how planets formed and how life began, as well as improve our understanding of asteroids that could impact Earth. Credit: NASA/University of Arizona.

Like 2001 CQ36, which we talked about yesterday in relation to Deep Space Industries’ Prospector-1 mission, Bennu is a potential Earth impactor and thus offers dual service in terms of pure science and planetary defense. The asteroid has a diameter of approximately 500 meters and, as you can see from the images below, has been surveyed by the planetary radar facilities at both Arecibo and Goldstone. The low delta-v required to reach it from Earth orbit makes it a prime candidate for close study, and we should have samples by 2023.

Image: These radar images of Bennu were obtained by NASA’s Deep Space Network antenna in Goldstone, Calif. on Sept 23, 1999. NASA detects, tracks and characterizes asteroids and comets passing close to Earth using both ground- and space-based telescopes. The Near-Earth Object Observations Program at NASA’s Jet Propulsion Laboratory in Pasadena, Calif., commonly called “Spaceguard,” discovers these objects, characterizes some of them, and plots their orbits to determine if any could be potentially hazardous to our planet. Credit: NASA/JPL-Caltech.

One reason images like these are important is that the precise measurement of an asteroid’s trajectory depends upon the Yarkovsky effect, which depicts the forces upon a rotating object as it heats. The effect can be subtle but over time can make for serious changes in an asteroid’s orbit. The asteroid 6489 Golevka, as measured between 1991 and 2003, drifted 15 kilometers from its predicted position. When we’re dealing with nearby asteroids and trying to make sure they don’t present a hazard to Earth, small changes like this can obviously be critical.

Learning the exact shape of an asteroid, along with its orientation and albedo, helps us produce more accurate predictions. That makes the Yarkovsky effect anything but theoretical, and in fact there are proposed asteroid deflection schemes based on it, some focusing sunlight on the object, some changing a small asteroid’s albedo by painting the surface with reflective coatings. OSIRIS-REx, as part of its numerous studies at Bennu, will be measuring the Yarkovsky effect.

The scientific payoff should be impressive as we look to learn more about the formation and evolution of the Solar System. Asteroids are leftovers from the system’s earliest days, and as we’ve seen from the Deep Space Industries plans, they’re also packed with natural resources like water, organics and metals. A carbon-rich sample from Bennu will help us probe the regolith layer at the sample site and understand the chemistry and mineralogy of such objects.