We’re only a month away from further excitement from Comet 67P/Churyumov-Gerasimenko. As the mission approaches its final days, the Rosetta orbiter will conclude its activities with a controlled descent to the region called Ma’at, an area of open pits on the comet’s surface that may reveal information about its interior structure. The descent, which will occur on September 30, comes after the months of intense scrutiny that led to the location of the Philae lander.

We did get data from Philae, but as you know, shortly after its initial touchdown at Agilkia, the lander bounced and continued to drift over the surface for another two hours. Its final location, on the comet’s smaller lobe, was subsequently named Abydos. Philae’s hibernation, after only three days, was the result of battery exhaustion, but the lander was able to communicate again with Rosetta in June and July of 2015 as the comet moved toward perihelion in August.

Even then, controllers didn’t know Philae’s precise location, although they had pinned it down to an area tens of meters across in which several candidate objects appeared in the low-resolution images that Rosetta was able to deliver at that time. Now we have new imagery taken on September 2 by the OSIRIS narrow-angle camera as the orbiter closed to within 2.7 kilometers of the surface. Here the lander’s main body and two of its legs are clearly visible. 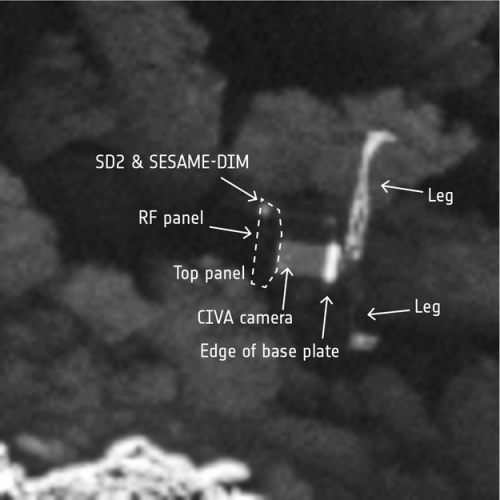 Image: A number of Philae’s features can be made out in this image taken by Rosetta’s OSIRIS narrow-angle camera image on 2 September 2016. The images were taken from a distance of 2.7 km, and have a scale of about 5 cm/pixel. Philae’s 1 m wide body and two of its three legs can be seen extended from the body. Several of the lander’s instruments are also identified, including one of the CIVA panoramic imaging cameras, the SD2 drill and SESAME-DIM (Surface Electric Sounding and Acoustic Monitoring Experiment Dust Impact Monitor).
Credits: ESA/Rosetta/MPS for OSIRIS Team MPS/UPD/LAM/IAA/SSO/INTA/UPM/DASP/IDA.

“This wonderful news means that we now have the missing ‘ground-truth’ information needed to put Philae’s three days of science into proper context, now that we know where that ground actually is!”

ESA’s Laurence O’Rourke, who has been coordinating the search efforts over the last months at ESA with the OSIRIS and SONC/CNES (Science Operations and Navigation Center at the French National Centre for Space Studies) teams, adds:

“After months of work, with the focus and the evidence pointing more and more to this lander candidate, I’m very excited and thrilled that we finally have this all-important picture of Philae sitting in Abydos.”

So the lander search comes to an end even as we look toward still more detailed images when Rosetta nears the surface. I also want to mention this footage of an outburst on 67P/Churyumov-Gerasimenko which may have been triggered by a landslide. The outburst occurred on February 19, although the imagery was not published until the 25th of August. Rosetta’s nine instruments were monitoring the comet from about 35 kilometers away when the outburst occurred, a fortuitous occurrence since outbursts have proven to be highly unpredictable. As this ESA news release explains, we have retrieved a harvest of data.

ESA scientists believe the outburst came from a steep slope on the comet’s largest lobe, in a region called Atum. What’s interesting here is that this region had just emerged from shadow when the outburst occurred, leading to the possibility that temperature changes created stress in the surface material that triggered a landslide. This, in turn, would have exposed fresh water ice to direct illumination from the Sun, causing sublimation that pulled dust along with it.

Eberhard Grün (Max-Planck-Institute for Nuclear Physics) is lead author of a new paper on the outburst:

“Combining the evidence from the OSIRIS images with the long duration of the GIADA dust impact phase leads us to believe that the dust cone was very broad. As a result, we think the outburst must have been triggered by a landslide at the surface, rather than a more focused jet bringing fresh material up from within the interior, for example.”

We’ll keep a close eye on Rosetta as the mission nears its end, hoping for impressive final imagery. The paper is Grün et al., “The 19 Feb. 2016 Outburst of Comet 67P/CG: An ESA Rosetta Multi-Instrument Study,” published online by Monthly Notices of the Royal Astronomical Society 25 August 2016 (abstract). The ESA news release on the Philae discovery is here.