The European Space Agency’s Gaia satellite has delivered a catalog of more than a billion stars — 1142 million, to be more specific — as it continues the work of mapping our galaxy in three dimensions. To be sure, we can expect much more from Gaia, but the September 14 data release is a milestone, offering distances and proper motion for more than 2 million stars. The mission’s first public release collects 14 months of data, from July 2014 to September 2015.

“The beautiful map we are publishing today shows the density of stars measured by Gaia across the entire sky, and confirms that it collected superb data during its first year of operations,” says Timo Prusti, Gaia project scientist at ESA.

To get an idea of Gaia’s long-term promise, recall that we are looking at the galaxy with Hubble-like precision. We may have more than a billion stars in today’s release, but 400 million of these are appearing in a catalog for the first time. 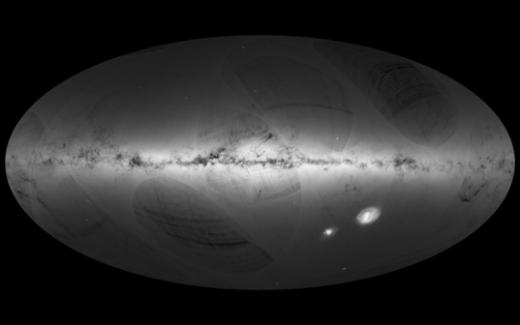 Image: An all-sky view of stars in our Galaxy – the Milky Way – and neighbouring galaxies, based on the first year of observations from ESA’s Gaia satellite, from July 2014 to September 2015. This map shows the density of stars observed by Gaia in each portion of the sky. Brighter regions indicate denser concentrations of stars, while darker regions correspond to patches of the sky where fewer stars are observed. The Milky Way is a spiral galaxy, with most of its stars residing in a disc about 100 000 light-years across and about 1000 light-years thick. This structure is visible in the sky as the Galactic Plane – the brightest portion of this image –which runs horizontally and is especially bright at the centre. Darker regions across the Galactic Plane correspond to dense clouds of interstellar gas and dust that absorb starlight along the line of sight. Many globular and open clusters – groupings of stars held together by their mutual gravity – are also sprinkled across the image. Credit: ESA.

The image is downloadable in a variety of file sizes. Fifteen scientific papers describing the Gaia data are to appear in a special issue of Astronomy & Astrophysics. Those interested in digging into Gaia’s first data release can gain access here.

A collaboration of 450 scientists and software engineers known as the Gaia Data Processing and Analysis Consortium (DPAC) is charged with turning the satellite’s raw data into reliable stellar positions. ESA explains just how much of an upgrade Gaia represents in this news release, which discusses not only the billion-star catalog, but the two million stars represented both in Gaia’s work and the earlier Hipparcos catalogs, which are now more than two decades old. Combining the data allows scientists to sort out not just the physical movement of stars in the galaxy but also parallax effects caused by the star’s apparent position during a year-long Earth orbit of the Sun. A combined Tycho-Gaia Astrometric Solution is the result.

Antonella Vallenari (Istituto Nazionale di Astrofisica (INAF) and the Astronomical Observatory of Padua, Italy) comments on Gaia’s significance in the study of open star clusters. These are groups of young stars that were born roughly at the same time:

“With Hipparcos, we could only analyse the 3D structure and dynamics of stars in the Hyades, the nearest open cluster to the Sun, and measure distances for about 80 clusters up to 1600 light-years from us. But with Gaia’s first data, it is now possible to measure the distances and motions of stars in about 400 clusters up to 4800 light-years away. For the closest 14 open clusters, the new data reveal many stars surprisingly far from the centre of the parent cluster, likely escaping to populate other regions of the Galaxy.”

Firming up our knowledge of the positions and motions of stars is useful not only for our study of the Milky Way’s properties but also in exoplanet analysis and even work within our own system. July’s stellar occultation by Pluto, for example, offered a way to study the dwarf planet’s atmosphere, and early release of Gaia’s position for this star was crucial to monitoring the occultation in the narrow strip of Earth’s surface that experienced it.

I also note Emily Lakdawalla’s comment on the use of Gaia data in the extended New Horizons mission. The target Kuiper Belt Object is one we need to know a great deal more about. Says Lakdawalla:

One very practical use of Gaia data in planetary exploration is for navigation by New Horizons to its Kuiper belt target, 2014 MU69. Because 2014 MU69 was discovered so recently, its orbit is not known to as high precision as they would like; Gaia can only help. The more precisely the New Horizons team can predict its future path, the more precisely they can point the spacecraft instruments at it — in some cases they may be able to save significantly on precious data volume by reducing the number of observations they have to do to be sure they get the little thing in their field of view. They may also be able to target the point of closest approach closer, which means we could get higher-resolution images of it — valuable because MU69 is expected to be quite small, only about 30 kilometers in diameter.

In terms of exoplanets, ESA predicts that Gaia will discover thousands of them using both astrometry (measuring stellar positions, motions and magnitudes) but also transit methods. We can look forward to further information about known planets around bright stars but also the confirmation of planets previously detected by radial velocity methods. ESA adds that astrometry should extend spectroscopic surveys to numerous nearby M-dwarfs as it complements ground-based observations.

Bear in mind that Gaia is a continuing mission that will, in its five year span, track its vast number of targets numerous times, allowing astronomers not only to pinpoint the locations of stars but analyze their movement in the galaxy. Detailed observations of Cepheid and RR Lyrae variable stars offer us vital clues about cosmic distances, readings that can be extended far beyond our own galaxy. The expansion and contraction of Cepheids is directly correlated to the star’s luminosity, making them valuable ‘standard candles’ for such measurements.

Gaia has, in the data released so far, discovered 386 new Cepheids in a census that now includes 3194 variable stars, many of which are found in the Large Magellanic Cloud. Gaia should be able to offer extremely accurate distance measurements to a large number of variable stars using parallax measurements, thus calibrating the known relationship between brightness and periodicity. This should prove invaluable in the study of distant galaxies. More accurate data will be included in a planned 2017 data release, which will also include positional data for perhaps a million galaxies. The mission runs until 2019, with a five year extension possible.

I like Jason Wright’s response to a tweet from @StarshipBuilder, reacting to the Gaia collaboration paper cited at the end of this post and asking “How many of the stars surveyed by Gaia will ever be visited by humans?”

Whoa, did @StarshipBuilder just editorialize?
Must be an exciting paper! :)
My answer: all of them, or none of them https://t.co/0t7AvaXyi0

All of them or none of them. What a thought!

625 authors are behind “The Gaia Mission,” accepted by Astronomy & Astrophysics (preprint) as part of its Gaia Special Feature.

Next post: Project Orion: A Nuclear Bomb and Rocket – All in One