Project Orion: A Nuclear Bomb and Rocket – All in One

Larry Klaes has been a part of Centauri Dreams almost since the first post. That takes us back to 2004, and while I didn’t have comments enabled on the site for the first year or so, I remember talking to Larry about my Centauri Dreams book by email. Ever since, this author and freelance journalist with a passion for spaceflight has contributed articles, comments and ideas, as he does again today. Project Orion caught Larry’s attention as a way of using known technologies to enable daring deep space missions. The essay below gives us an overview of Orion and its possibilities, looking at a concept that never flew but still captures the imagination. In addition to his active freelancing, Larry has been editor of SETIQuest magazine and president of the Boston chapter of the National Space Society. He now writes regularly for SpaceFlight Insider, where this article originally appeared. 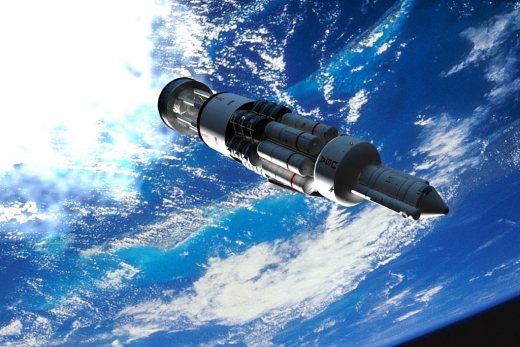 At their most fundamental level, all rockets past and present were and are, basically, controlled bombs. Their fuel consists of materials and chemicals which, when activated/combined in the proper sequence and amount, create a series of explosive reactions. The resulting energy release is then directed in a manner so that the resulting exhaust comes out of the end of the rocket away from the payload sitting atop it and the direction that its builders want to send that payload. That is essentially Sir Isaac Newton’s third law of motion put into practice.

When this technological setup works, we have a successful mission. However, when something goes awry, we end up with a vehicle that can go from a powerful and fast means of space transportation to an inadvertently dangerous weapon. As just one large example, if the famous Saturn V rocket – which sent humans to the Moon for Project Apollo between 1968 and 1972 – had ever exploded, the 6.5-million-pound (2,950 metric tons) fully fueled booster would have created a destructive event equivalent to the detonation of a small nuclear bomb, minus the radiation. Thus the reason that no one (excluding the three mission astronauts, of course) was ever allowed within three miles (4.8 kilometers) of the launch pad at Cape Kennedy when a Saturn V was lifting off into space.

The former Soviet Union had several real world examples of just such a catastrophe with their equivalent N1 rocket, which they were using to compete with the United States in the race to place a man on the Moon by 1970. Every one of their N1 tests (all unmanned) ended in dramatic failure, with one rocket explosion on the ground practically vaporizing its launch pad and heavily cratering another pad with debris half a mile (almost one kilometer) away.

So now imagine a rocket design where the fuel used were actual bombs detonated on purpose – and nuclear bombs at that. It was known as Project Orion.

Not surprisingly, Orion was born during the Cold War, when the United States and the Soviet Union were squaring off against each other by stockpiling nuclear weapons to let each other know that an attack by one nation using such devices would be fatal for the other, along with most other places on Earth. This concept was called Mutually Assured Destruction, or MAD for short. 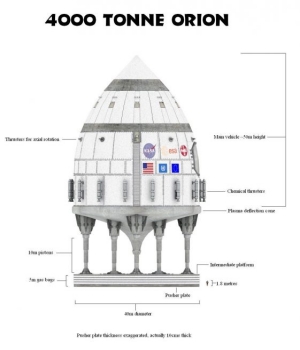 In the United States, the power of the atom was also being sold as a way to make life better for everyone. Nuclear power plants were being touted as a cleaner and much more efficient way to generate electricity for our civilization. The binding force of the atom was even seriously considered as a replacement for the fossil fuels powering our land, sea, and air vehicles.

The Ford Motor Company went so far as to come up with a car they called the Ford Nucleon, where a single nuclear fuel rod would keep this automobile of the future operating for over five thousand miles before a new fuel rod was required. The Ford Nucleon never got past the model stages, but the point is that a major American car company took the idea seriously, at least for a while.

If nuclear power could be plausibly applied to mere ground transportation, then using it to send heavy space vessels into the “final frontier” only made even more sense at the dawn of the Space Age. Both superpowers were cranking out those very methods of propulsion at an ever-increasing rate.

In an example of turning swords into plowshares, Project Orion was envisioned as a vessel carrying a supply of hydrogen bombs to be ejected out the stern of the spaceship one at a time. The bomb would then be detonated mere seconds later, where the resulting plasma would encounter a large, thick, shock-absorbing “pusher plate” attached to the end of the spaceship that would simultaneously allow Orion to be moved forward while protecting the ship from the blast and radiation. Each new bomb detonation that followed would push the vessel faster and faster, allowing Orion to reach just about anywhere in the Solar System within one year or the nearest star system, Alpha Centauri, in just over one century under one mission scenario.

Project Orion was worked on under a contract by the United States Air Force (USAF) at the General Atomics company from 1958 to 1965. Project models for Orion soon matched and exceeded the grand space dreams of the era due to its novel method of propulsion.

One team member, the famous Freeman J. Dyson of the Institute for Advanced Study in Princeton, New Jersey, envisioned a ship with a total mass of 400,000 metric tons (881,849,049 pounds) of which three-quarters of that weight would consist of 300,000 one-megaton H-bombs weighing 1,000 kilograms (2,205 pounds) each. The rest of the weight would be split between the payload and ship structure and the ablation shield. Detonating the bombs every three seconds (until the supply ran out in ten days under this scenario) would keep the acceleration at a comfortable 1 g, or gravity.

The plans for Orion were anything but timid. Manned Mars missions using this vessel would have been sent in 1965, followed by a mission to the ringed planet Saturn in 1970! The spaceship in the film 2001: A Space Odyssey, the USS Discovery, was originally designed as an Orion type craft aimed at Saturn in the novel version. The author of the film’s screenplay and novel, Arthur C. Clarke, was also a member of Project Orion. Not only could Orion have conducted a round-trip voyage to Pluto in just one year, but Dyson also calculated a version that could flyby Alpha Centauri in about 130 years at 3% light speed. By comparison, the Voyager space probes will take 77,000 years to reach the distance of our celestial neighbor 4.3 light-years away. The team even considered a massive Orion that could serve as an interstellar ark, which became the vehicle of choice in the 2014 television mini-series Ascension. 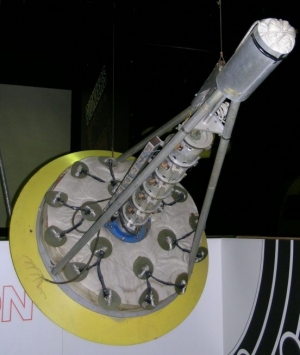 As a further reflection of the era, Project Orion was more than just a paper dream. The team built a working 7-foot (2.1-meter) scale model (non-nuclear of course) they called Hot Rod. Launched in 1959 at Point Loma, California, Hot Rod survived five successive explosions that struck its pusher plate and sent the vehicle faster and higher with each detonation. The test vehicle then parachuted safely to the ground, proving that Orion was as least technically feasible. Gulf General Atomic later donated Hot Rod to the Smithsonian in 1972, where it was long on display at the institution’s Air and Space Museum but is currently in storage. However, a scale model of the completed Orion vessel is publicly viewable at the Steven F. Udvar-Hazy Center in Chantilly, Virginia, in their Rockets and Missiles exhibition. This model was donated to the Smithsonian in 1979 by the General Dynamics Corporation.

In the end, Orion was terminated neither by physics nor technology but by politics and a growing public fear of nuclear power. The Partial Nuclear Test Ban Treaty signed in 1963 forbids testing nuclear devices of any kind everywhere but underground. Two years later, the USAF canceled the project’s budget. Orion became a legendary symbol of an era known for both its far-reaching dreams and excesses of power. To this day, Orion is still the only feasible mean of interstellar travel, both robotic and manned, that could actually be built with current technology and knowledge.

So could (and would) Orion be revived some day? While the United States and Europe (via the European Space Agency) could make the vessel a reality, Orion’s very means of propulsion remain among the major hindrances to such a plan for the foreseeable future. At present, the greatest chance for Orion lies with China. They not only have the means and the resources to undertake such a grand project (as well as vast, remote regions where they could safely test and launch the vessel), but Orion would be a logical extension of their current strivings for major science and technology goals. This author notes that he has no actual knowledge if China has ever conducted or will ever conduct such a project, only that of all the spacefaring nations on Earth, they make for the most realistic choice at present for reviving Orion. 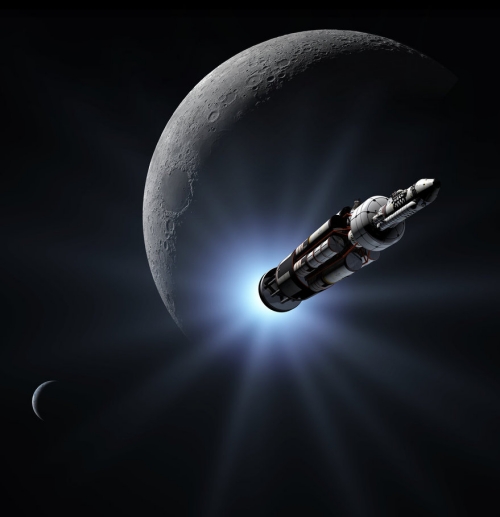 Russia is another possibility for building Orion on a similar scale as China, but their current geopolitical issues make such prospects questionable on multiple levels. India might also be a contender for their own Orion down the road, but such a future remains to be seen. There are several other nations which have both their own space and nuclear programs, but the thought of them building an Orion in the near future is both questionable and concerning.

As Project Orion has always been about big dreams with even bigger goals, then perhaps we can one day hope that Orion will not only become a method for turning nuclear weapons away from Earth and our species and aim them toward the stars for peaceful purposes, but also that Orion might become a way that we can explore and colonize space together as one humanity. 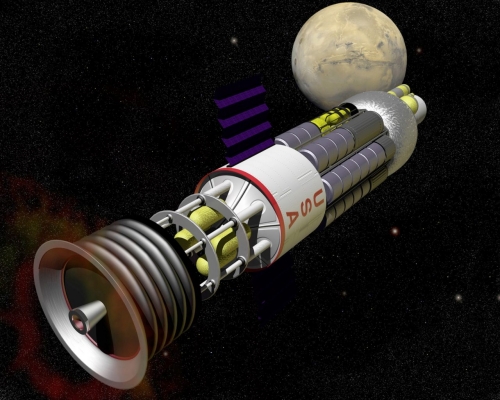 For more information on Project Orion, see the following:

For those want even more information about Project Orion and its variants, you must see Atomic Rocket’s pages on it here.