I’ve always thought that the biggest driver for our next steps in space is the presence of asteroids. Asteroids affect us in two powerful ways, the first being that they are sources of potential wealth for companies like Deep Space Industries and Planetary Resources, as commercial operations use robotics and eventually humans to extract water and precious metals. Likewise significant is that near-Earth asteroids are a reminder that developing the tools for altering an asteroid trajectory is a good insurance policy for planetary protection.

Asteroids go past us all the time. I count eight that will move past the Earth between now and October 1, the closest — 2015 SO2 and 2015 DS53 — moving within 17 lunar distances. There’s nothing to worry about in this list, as all have zero chance of impacting the Earth. Looking ahead to the first 20 days of October, the closest pass will be by asteroid 462959, at 15 lunar distances. A lunar distance is 384,401 kilometers, and it’s how the Minor Planet Center tabulates these things. I’m also using the MPC’s assessment of impact risks. 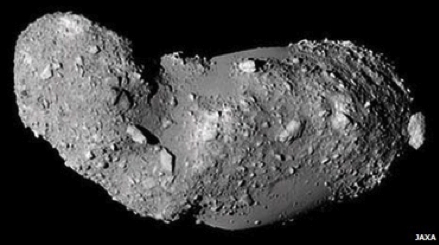 Image: The Near-Earth asteroid Itokawa, from which the Japanese Space Agency (JAXA) returned samples in its Hayabusa mission. Credit: JAXA.

Asteroid impacts make for sensational speculation and the occasional overwrought movie, but I’d suggest the best approach to them is simple prudence. We have a mission — OSIRIS REx — on its way to an asteroid called Bennu to make numerous scientific investigations, teaching us about the early history of the Solar System. But the mission will also help us understand the factors that influence an asteroid’s trajectory, such as the Yarkovsky effect, which can slightly alter a small object’s movement because of the uneven heating it can experience. Learning more about such factors suggest better ways to nudge any errant asteroid in the future.

What I really favor is simply keeping asteroids in focus and educating the public about what we’re learning, so that we can get past the sensationalism and make better choices about future missions. It’s useful on that score to point to the Minor Planet Center’s Asteroid Data Explorer site, which allows viewers to quickly drill down into the actual data. If you want to rank asteroids by size, orbital period or closest approach, you can quickly summon up the needed information, with adjustable filters in place for fine-tuning. You can also rank nearby objects in terms of their potential for impact, invariably slight, but a number we always want to keep refining.

Operating at the Smithsonian Astrophysical Observatory, the Minor Planet Center tracks not just near-Earth objects but also comets and the outer satellites of the major planets. As to the term ‘minor planet’ itself, it refers to objects orbiting the Sun that are neither planets nor comets, which can be anything from a dwarf planet like Pluto to a Kuiper Belt Object or an asteroid, trojan or centaur. These turn up more quickly than I would have suspected, with the MPC listing 477 such objects discovered just this month. 45 Near-Earth Objects turned up in the same period, with 1244 NEOs discovered so far in 2016.

2015 DS53, a Near-Earth Object, passes within those 17 lunar distances I mentioned above in the early morning UTC on September 22. The list of close approaches maintained on the MPC site is a fascinating thing to track, reminding us how much our view of the Solar System has changed in the past half century. Few people in the 1950s would have imagined such a debris-laden system, with another belt of material outside the most distant known planet, and a vast halo of comets beyond that. And few would have thought there were so many NEOs.

As the Minor Planet Center reminds us, a known asteroid passes within a few million miles of our planet just about every day. And it has just introduced yet another way of tracking these through an online service called the Daily Minor Planet, which is being developed both by the MPC and volunteers from Oracle Corporation. Asteroid updates go straight to your inbox. Astronomer Matt Holman, director of the MPC, sees the project as an educational resource:

“Most people don’t realize how common asteroid flybys are. We want the Daily Minor Planet to educate readers in an entertaining way, so the next time they see a doom-and-gloom asteroid headline, they’ll know where to go to find the facts.”

This is an outreach project worth keeping an eye on. You can subscribe here. And I think Holman has it right when he refers to ‘asteroid headlines.’ The facts invariably knock the pins out from under the sensationalists who try to milk every natural phenomenon for controversy, but having a widely distributed fact-checking source like this one should tamp all that down.

What we need about asteroids is information and careful analysis. If some entrepreneurs are right, they’re going to play a large role in creating new wealth one day, and if I’m right, they’re going to act as a spur to help us develop the needed technologies to reach them quickly. What we learn will inevitably pay dividends in case we do discover a serious threat, which is why asteroids and their potential should play a major role in an informed space policy.